It was 2018 when emerging Australian filmmakers Hannah Barlow and Kane Senes started writing Sissy – their critically acclaimed, gory and yet highly Instagrammable horror-comedy that hits cinemas this week. 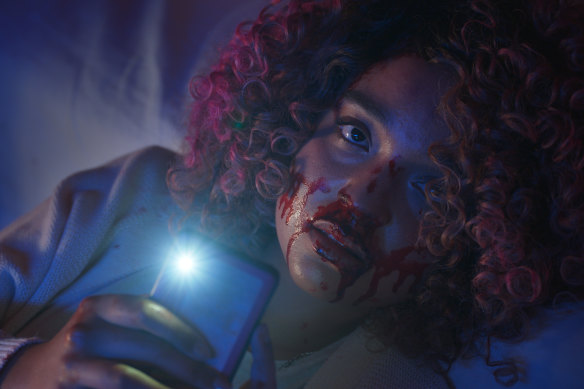 Aisha Dee (who plays a cheery social media pro in The Bold Type) stars as a wellness influencer in Sissy. Credit:Sissy/Supplied

“Everyone has a mouthpiece online, and there are pros and cons to that,” Senes adds. “But I think it allows a lot of people to present a facade of themselves and build a cult, so to speak. I think there are cults all around us on social media.”

And, he goes on, “the film is almost more relevant now”.

The intervening years have brought a pandemic, in which people increasingly turned to online spaces for connection; the rise of TikTok, possibly the most addictive social media platform to date; and a general spike in anxiety which has led many to seek the advice and comfort of “wellness” influencers not unlike the titular character of their film.

Sissy, or Cecilia as she prefers to be called – played by Aisha Dee, who had a standout role as a cheery social media pro in The Bold Type – is an online creator who’s amassed 200,000 followers for her guided meditations (“making friends with hyperventilation”), dreamy aesthetic and motivational speeches about healthy boundaries, clean living and safe spaces. But that pristine Millennial pink facade starts to fade when she unexpectedly reconnects with her childhood friend, Emma, and old scars are unpicked at a bachelorette party in the bush.

The film – part Carrie, part Girls, part Scream – has had a lot of buzz overseas. A successful premiere at SXSW got the attention of horror platform Shudder, which acquired the streaming rights. And seven months later, the film is still sitting at 97 per cent fresh from critics on Rotten Tomatoes.

Now that buzz has hit our shores, with the film earning three surprise nominations at this year’s Australian Academy of Cinema and Television Arts Awards (AACTAs). Dee is nominated for best actress; Barlow and Senes for best direction; and Sissy is up for best film too, alongside big names like Baz Luhrmann’s Elvis.

“We’re AACTA-nominated next to our heroes,” Barlow, 31, says. “It’s a goal we never thought we’d achieve on this movie. We just assumed that Australians wouldn’t recognise a horror-comedy.”

It’s also notable that this is just the pair’s second feature-length film. The first, For Now (2017), was a “$25,000 microbudget indie that was shot in seven days”.

The decision to try their hand at horror was made for two reasons: because Senes is a “gore hound” and has always loved the genre, and because “horror sells”.

“It’s like the only genre that’s guaranteed to make money, where you can see a return on investment,” Barlow says. “We came at that decision artistically, but also with a business mindset because we want to survive.”

This relative confidence comes because horror is generally cheap to make, and also because the genre has a loyal fan base with dedicated festivals and online spaces that connect filmmakers and audiences from all around the world.

“In the US, the film dropped one day on Shudder and suddenly the horror community found it and shared it,” Barlow says. This creates important word of mouth which often translates to ticket sales as audiences want to experience these films in a communal setting, gasping at every jump scare and cheering at every kill. 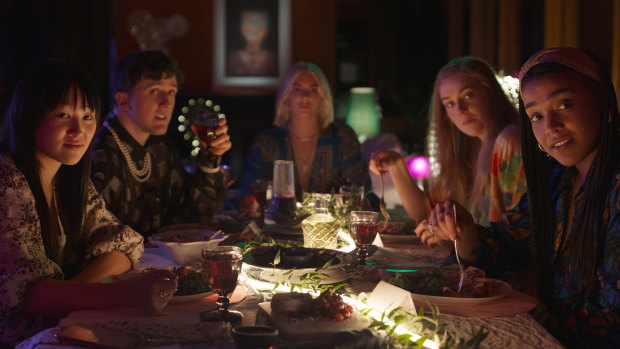 No spoilers … but obviously, the trip doesn’t go as planned. Credit:Sissy/Supplied

”[Horror fans] want to be in the cinema,” Barlow says. “And that’s amazing because, as filmmakers, we sort of have the feeling that it’s dying and that theatres are all going to shut down… But those audiences, they show up and they celebrate you.”

From Wolf Creek to The Babadook, Australian horror is well-established on the world stage and it’s not unusual for young creators to cut through either. James Wan and Leigh Whannell were just 26 when they wrote Saw, a film which made US$103 million at the global box office off a budget of just US$1.2 million, and went on to become one of the highest-grossing horror franchises of all time.

Of course, that’s a high bar for comparison – and the industry has changed a lot since. But an appetite for original horror remains. Barbarian is currently one of the most popular films in Australian cinemas, and Bodies Bodies Bodies (a much smaller release from cult distributor A24) recently took US$13 million at the global box office.

The latter film, another horror-comedy that premiered at SXSW this year, has drawn many comparisons to Sissy. Both films follow a young group of friends in a remote location, slowly unravelling; and they also explicitly deal with generational issues of performative identity.

Senes says that, when he and Barlow were writing the film, they felt confused why there weren’t more movies exploring the personal perils and anxieties of social media. Then, after they completed their first draft, Ingrid Goes West was released. Then came Bo Burnham’s Eighth Grade.

“There’s a big generational push [to tell these stories] because it’s one of our biggest issues,” Senes says. “Sure, there are bigger issues in the world than social media but, on a daily basis, most people’s concern is things like perception: How am I being perceived? Am I somebody in this world? Do my friends and family love me? Am I getting likes on my posts?”

“Sissy isn’t a judgment of our generation – or Gen Z, who are the first to grow up with all this from a childhood age. It’s a cautionary tale.”