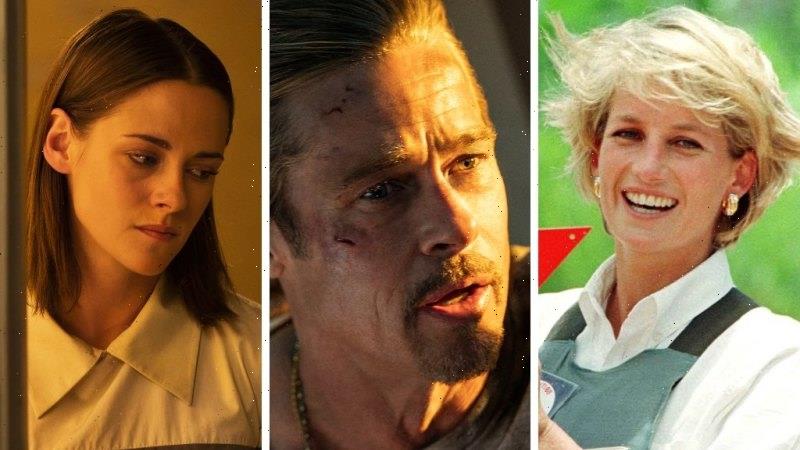 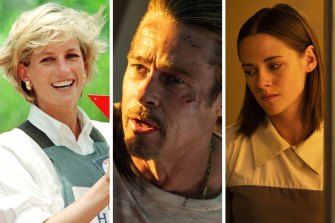 Movies to see in August include (from left) The Princess, Bullet Train and Crimes of the Future.Credit:Madman Films, Scott Garfield

August doldrums: too early for summer releases, too late for wintry pleasures. This time of year often sees distributors clearing out the cupboards, getting ready for the big releases of summer, but COVID-19 and new release platforms have scrambled the eggs.

There are one or two big movies this month, such as Bullet Train – a Brad Pitt action-comedy – but much more that is quirky and oddball. David Cronenberg and Jordan Peele are both back in the ring, so anything can happen.

Let the winds of August guide you. Or just read on.

Brad Pitt and four other hired killers board the same train from Tokyo to Kyoto, gunning for the same briefcase. This promises silly fun, loads of action, cartoonish violence and some laughs. Brad wants to get out of the life; Sandra Bullock plays his handler. It’s directed by David Leitch, who made Deadpool 2 and used to be Pitt’s stunt double. Opens August 4.

Juniper as in gin. The luminous and ever-surprising Charlotte Rampling plays a once-famous photographer, now a committed lush with a gammy leg. Her wayward nephew (George Ferrier) is sent to take care of her. Written and directed by Matthew Saville, this British film looks interesting. Rampling is never disappointing. Opens August 4.

Jordan Peele’s new film has split American critics down the middle. Either it’s brilliant and original, or an incoherent mess. A brother and sister (Daniel Kaluuya and Keke Palmer) take up their father’s ranch in the desert after his mysterious death. Pretty soon they are pointing cameras at the sky, trying to get proof of visitors from another world. These aliens don’t look friendly. Opens August 11.

It is hard to imagine how you could make a satisfying film about the Wannsee Conference, where key Nazis meet in a villa outside Berlin to plan the extermination of the Jews, but East German-born director Matti Geschonneck has given it a shot. This looks to be rigorous and unsentimental, a reckoning with the uncomfortable truth that it took a great deal of planning to kill so many people. Opens August 11.

Some critics are already calling this the definitive documentary on Princess Diana. Ed Perkins uses the currently popular technique of pastiche, pasting it all together using only actuality, which has its strengths and weaknesses. Absolutely certain is that it will be compelling viewing. Media types may experience discomfort. Opens August 11.

An Australian film, shot around Byron Bay, with Luke Hemsworth as a surfer on the run for dope dealing. Rasmus King plays Rockit, his son. The lovely Isabel Lucas is part of the attraction; she chooses interesting scripts. Director Tyler Atkins is on debut. Worth a look. Opens August 18.

Crimes of the Future 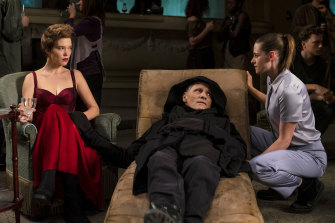 Léa Seydoux, Viggo Mortensen and Kristen Stewart in Crimes of the Future.Credit:Nikos Nikolopoulos/Neon

After an eight year break, David Cronenberg returns with a sensational cast: Viggo Mortensen, Lea Seydoux and Kristen Stewart. There will be blood and probably entrails, piercing, body parts, plus a wealth of ideas to keep us guessing. Cronenberg is often disgusting, but never boring. Bring a paper bag. Opens August 18.

Good luck to you, Leo Grande

This one stars Emma Thompson – what more do you need to know? Oh alright, she hires a beautiful sex worker (Daryl McCormack) to refloat her boat. Be warned: Thompson goes full frontal here, which she says was one of the hardest things she has ever done in her professional life. Should be funny. Opens August 18.

A road movie from Iran that won a lot of hearts when it screened at Cannes. From writer-director Panah Panahi, it follows a family through stunning landscapes and various challenges. Making movies in Iran has never been easy, given how often the regime imprisons its directors, but so many of the films are memorable and worth supporting. Opens August 25.

Werner Herzog made a documentary in 2016 about Catherine and Maurice Krafft, French volcanologists who died on a mountain in Japan in 1991. This new film is based heavily on their own footage of active volcanoes, obtained at great risk, during their bewilderingly dangerous careers. Advance reports are very positive. Opens August 25.