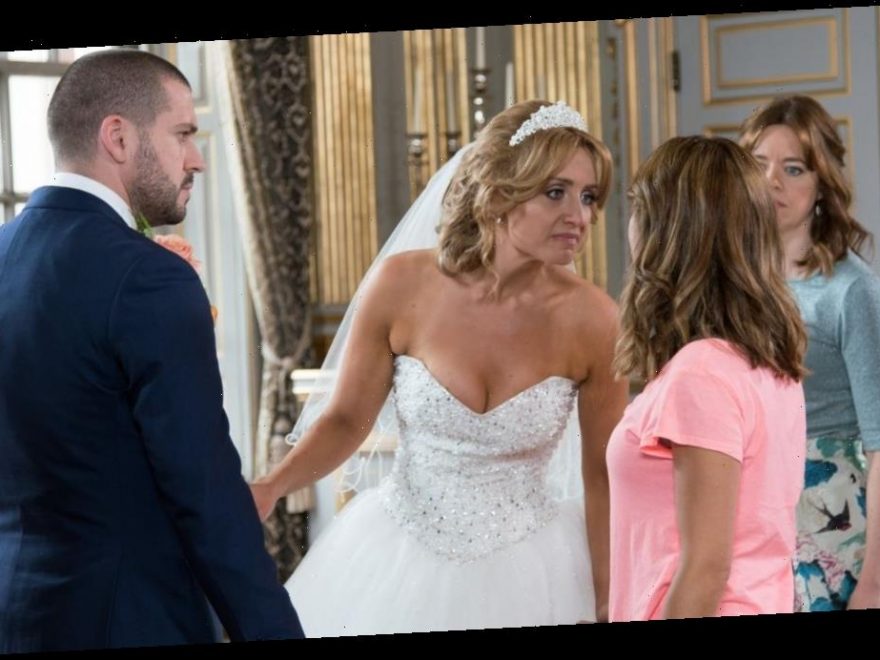 Nothing gets us going quite like a disastrous week in soap land – and how better to kick off a week like that than with a dramatic flash forward of a 999 call? Monday’s episode of Emmerdale did just that.

Considering this is the week that fan favourite Mandy Dingle (played by Lisa Riley) is set to marry Paul Ashdale (played Reece Dinsdale), we couldn’t help wondering whether her much-anticipated wedding is set to end in tragedy.

It wouldn’t be the first time a soap wedding took a tragic turn for the worst and it certainly won't be the last. In true soap-fan style, we thought we’d take a look at some of the most disastrous weddings in soap history…

The tragic end to Ronnie and Jack’s wedding in EastEnders

Ronnie and Jack tied the knot on New Year’s Day, so it’s no surprise that their wedding was doubly disastrous. An epic party which saw Ronnie finally find happiness took a nasty turn due to Roxy’s cocaine addiction.

While Jack read the kids a bedtime story, sisters Ronnie and Roxy headed to the pool for a quick dip. Roxy jumped in but never resurfaced and a panicked Ronnie dived in to save her drowning sister. However, it all ended in tears as both the Mitchell sisters died. When Maria burst into Aidan’s wedding with Eva, fans knew something epic was about to happen. Maria had been stung by Aidan and was determined to expose Eva’s fake pregnancy and wreck the wedding.

In true soap style, the saga ended with Eva pushing Maria into a water fountain and jumping in after to finish the job. None of us will ever forget watching Eva flail about in her sodden wedding dress…

Emmerdale’s Debbie Dingle and Pete Barton’s wedding was one to remember for all the wrong reasons.

As the helicopter that was meant to fly them away after the ceremony crashes into the village hall, Debbie, Pete and their guests are forced to flee the explosion.

Toadie’s fourth wedding was to Sonya and after his tragic wedding to Dee – which ended in her death – Toadie was in for a bit of good luck. But it wasn’t meant to be and their apparently perfect day took a nasty turn when a gas bottle exploded at the reception.

After a beautiful ceremony, an explosion led to the death of two much-loved characters, Rhys and Priya.

Emmerdale’s Pierce had been manipulating Rhona for ages, but their wedding night marked a dark turn. After overhearing Rhona talking to Paddy about their drunken kiss, Pierce was left fuming but put on a brave face and made it through the wedding.

After the reception, he whisked Rhona back to their place and revealed plans to move them both to the Lake District. Rhona wasn’t too happy about it, but as Pierce got angrier it became clear she wasn’t going to escape him.

After hurling abuse at her, Pierce pinned Rohona to the floor and raped her. The love triangle between Phil, Sharon and Shirley was taken to the next level when Shirley turned up to the happy couple’s home with a gun in her hand.

Determined to get her own back after Phil messed her around, Shirley revealed the gun Sharon had been keeping hidden. As tensions rose things got messy and Shirley ended up shooting Phil.