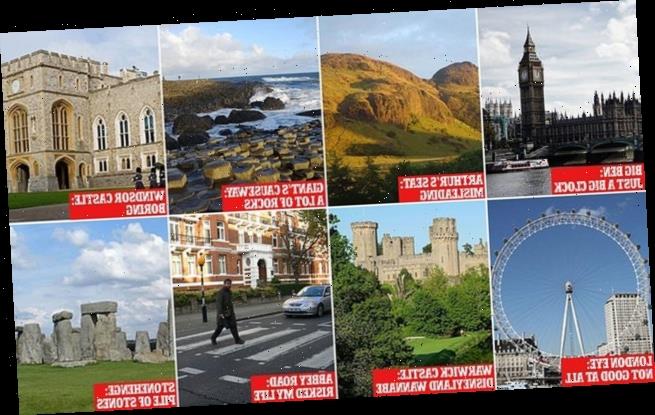 The UK is known for its rich history and bustling tourist attractions – from the mysterious Stonehenge and royal Windsor Castle, to the outstanding natural beauty of Giant’s Causeway.

But while they may be highly regarded across the world, some visitors have been less than impressed with the likes of Big Ben, Kew Gardens and the London Eye.

Taking to TripAdvisor, one holidaymaker called Stonehenge ‘just a pile of stones,’ giving it a one-star review in disregard of its 5,000 years of history, while another  described Warwick Castle, which was built in 1068, as a ‘Disneyland wannabe’.

Among the other hilarious cutting reviews, complied by BoredPanda, include The Angel of the North being called ‘boring’ and Ben Nevis being critiqued because it’s ‘too steep and too high.’ 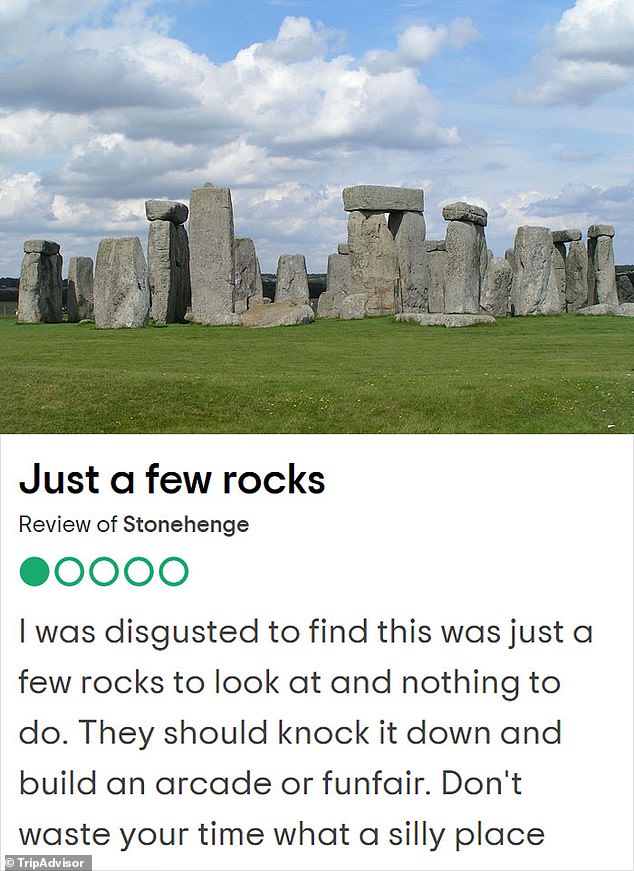 While the UNESCO Heritage Site of Stonehenge in Wiltshire is world famous and a mystery that’s perplexed historians for thousands of years, one reviewer said it was ‘just a few rocks’ and suggested it should be knocked down in favour of a fun fair. Another added it was ‘just a pile of stones’ 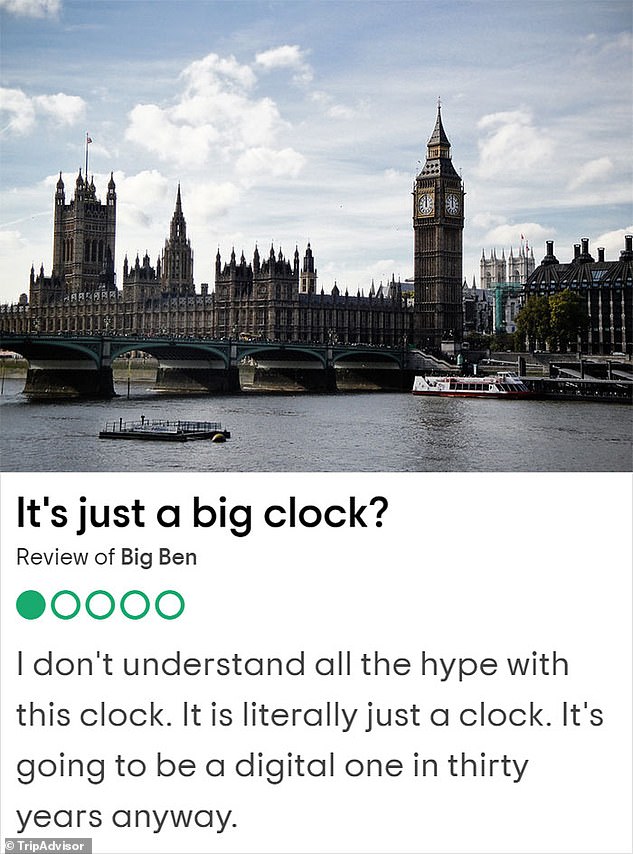 The Elizabeth Tower – often referred to by the bell inside as Big Ben – is a sight many immediately picture when thinking of London, but one reviewer said it was ‘just a big clock,’ while another added it should be renamed ‘medium Ben’ saying they’d seen ‘bigger Lego towers’ 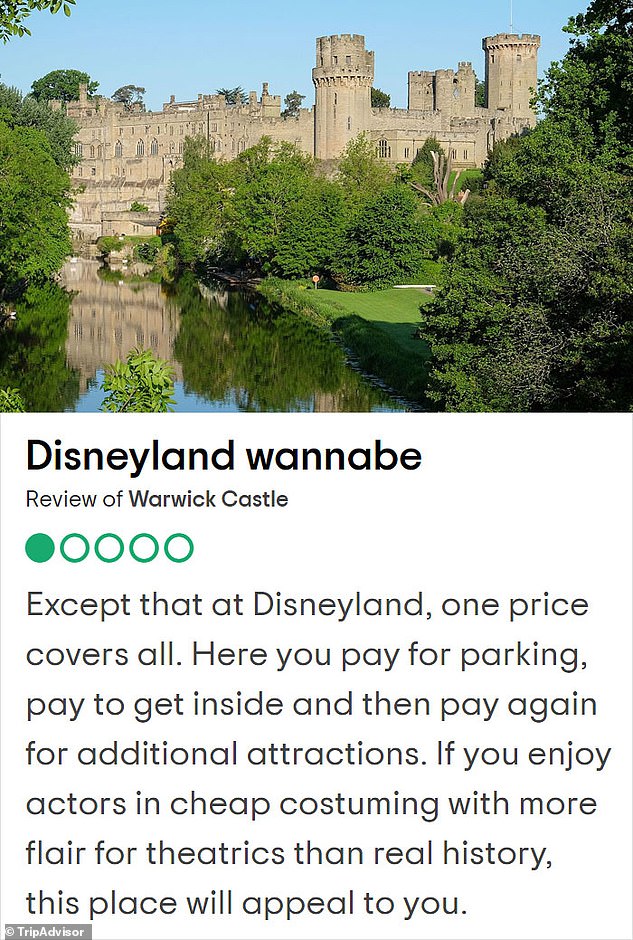 Built just two years after the Battle of Hastings in 1068, Warwick Castle was constructed nearly 900 years before the first Disneyland opened. Despite this, one reviewer thought the castle was a ‘wannabe version’ of the American theme park 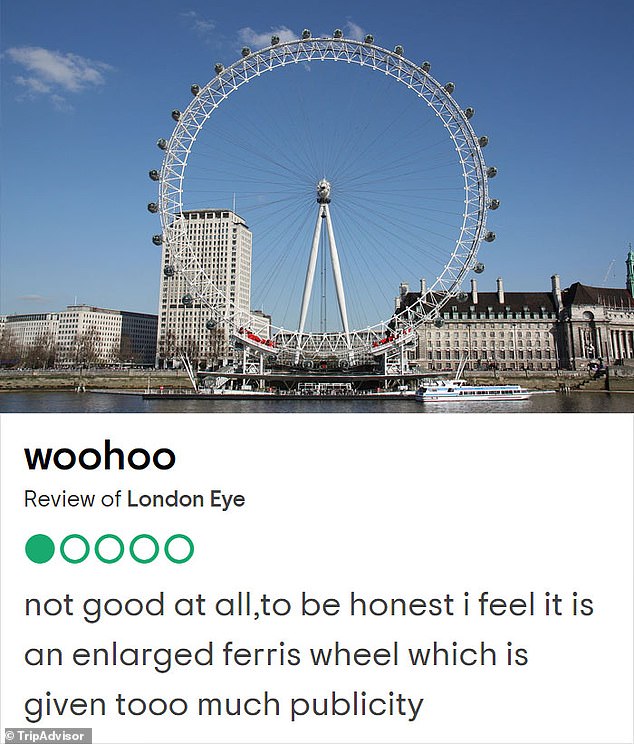 London Eye is a go-to for many tourists to get panoramic views of the capital city. But one sour reviewer said it was ‘an enlarged Ferris wheel with too much publicity’ 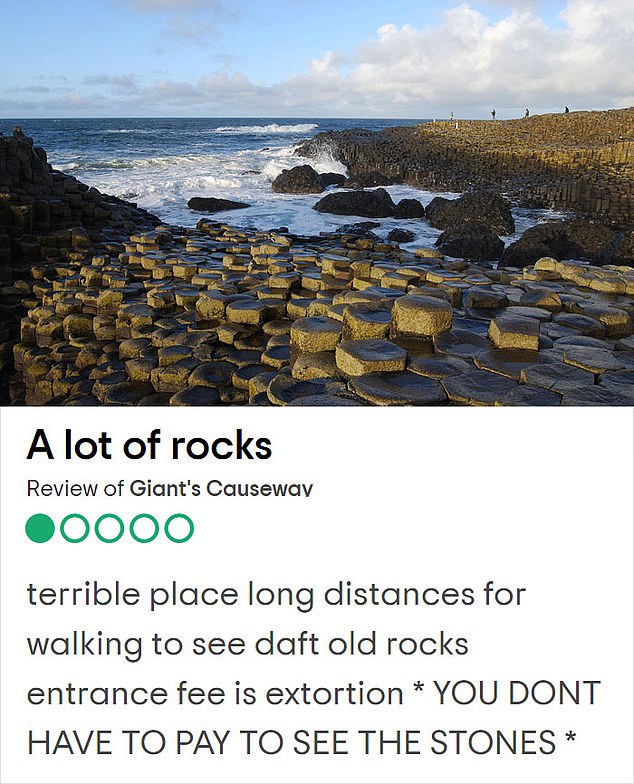 Too many daft rocks! Northern Ireland’s Giant’s Causeway is an area of outstanding natural beauty and a UNESCO world heritage site, but one person thought it had too many stones 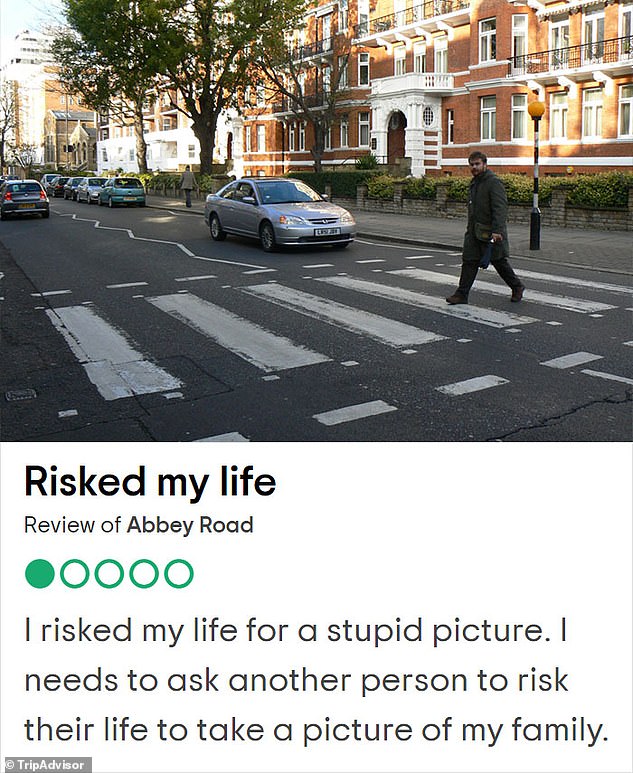 Many people attempt to recreate the cover of The Beatles 1969 album Abbey Road at its namesake, but one said he risked his life trying to do it 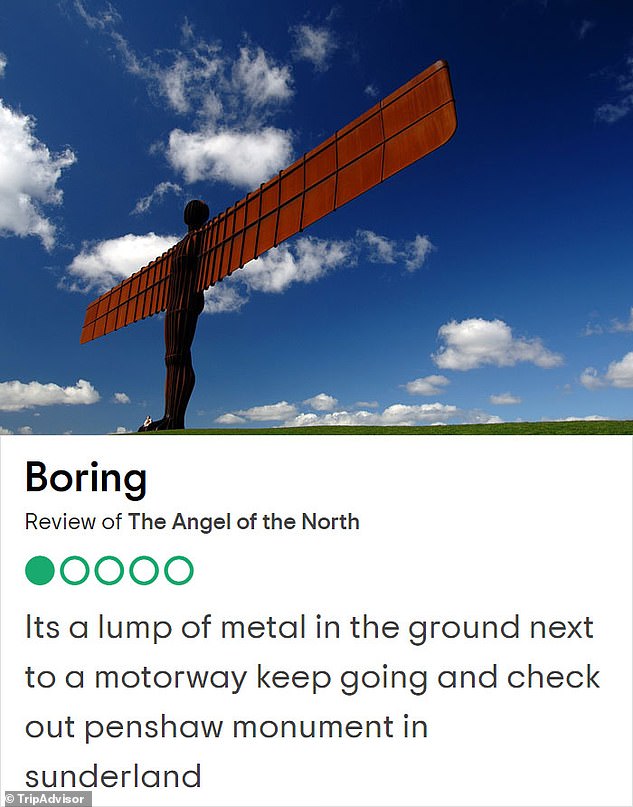 A biased view? The Angel of the North, a site that makes many Geordies proud, was described as a ‘lump of metal in the ground’ by someone who preferred rival city Sunderland’s Penshaw monument 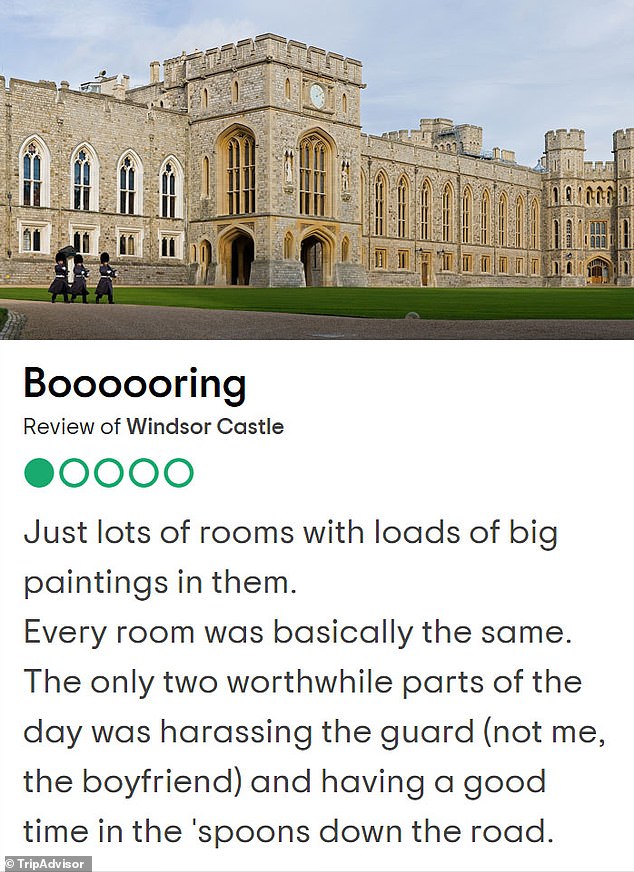 What would the Queen say! One reviewer called Windsor Castle – the monarch’s primary residence – ‘boring’. They added it was ‘just a lot of big rooms with paintings in them’ 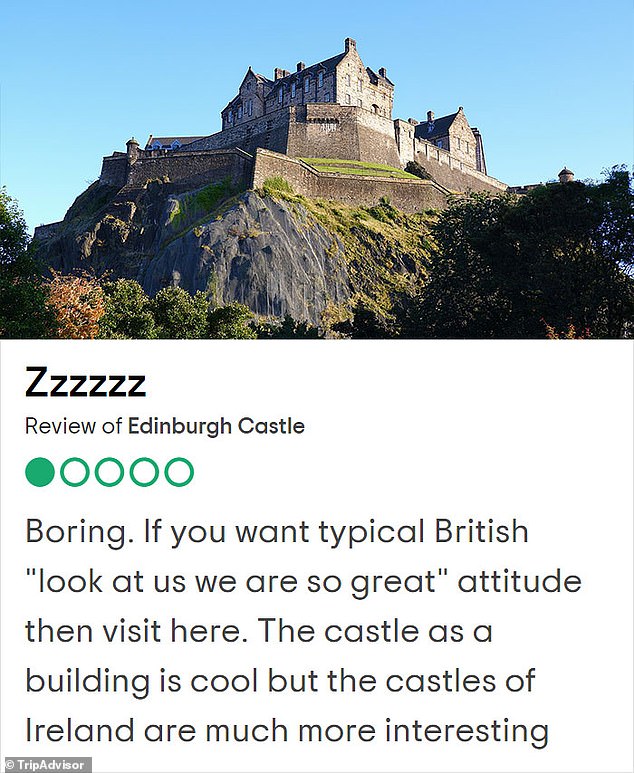 Edinburgh Castle is the ground for the famous Military Tattoo every year which is often attended by royals, but this reviewer thought it was ‘boring’

Ben Nevis is the highest peak in the UK with the summit 1,345 metres above sea level. But one reviewer appeared to not know what mountain climbing was when they started their day out, calling it ‘too steep and too high’ 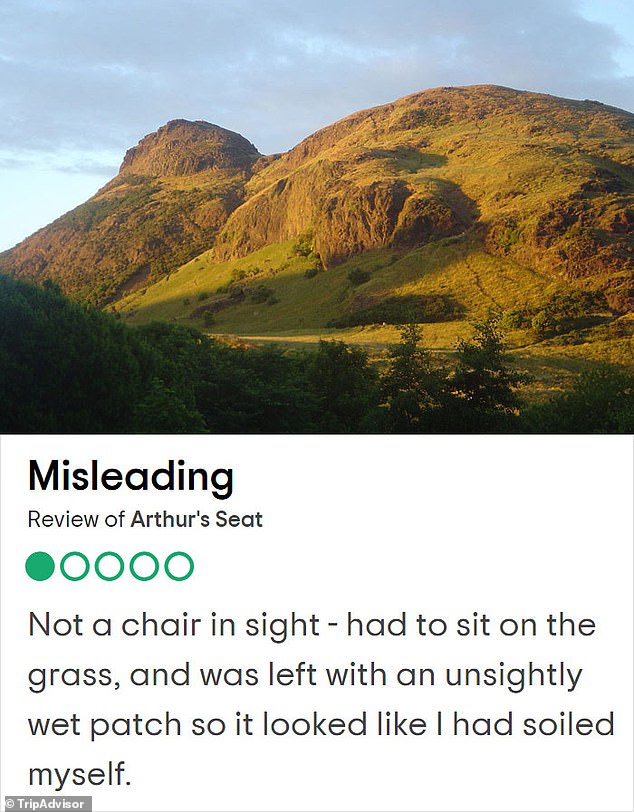 It’s not really a chair! One day-tripper was upset that Arthur’s seat wasn’t really a seat, meaning they had to sit on the grass 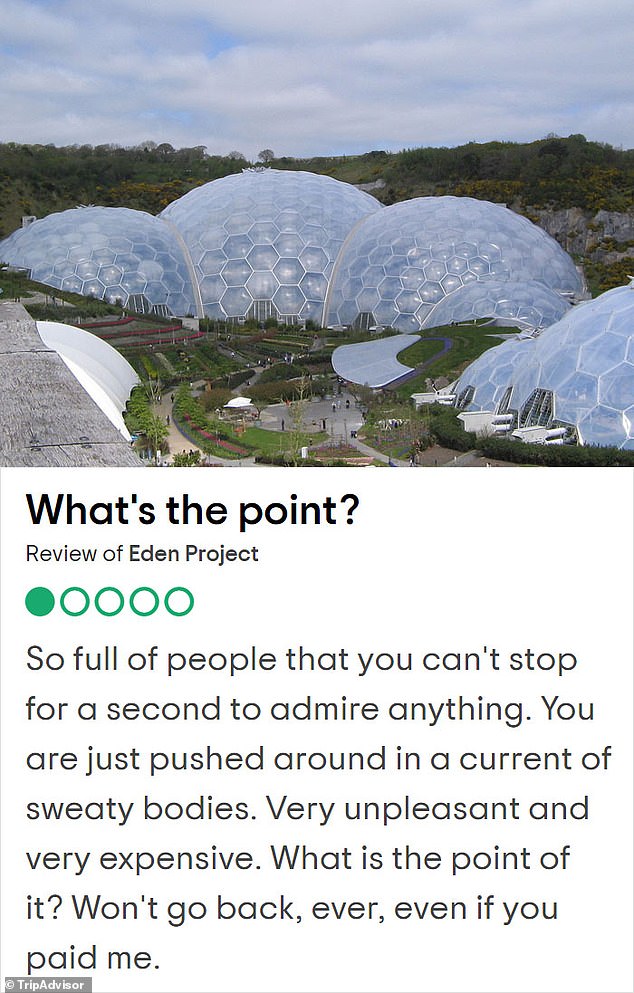 Bursting the bubble! One reviewer was upset that the Eden project was too busy during their visit to the famous Cornwall sight 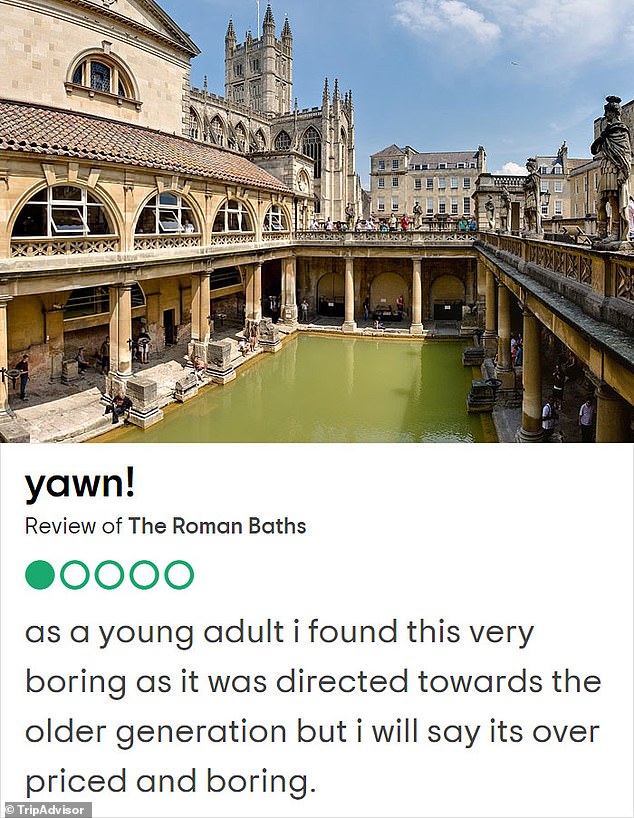 Boring! One young viewer said the Roman baths were ‘overpriced and boring’ and designed for older generations 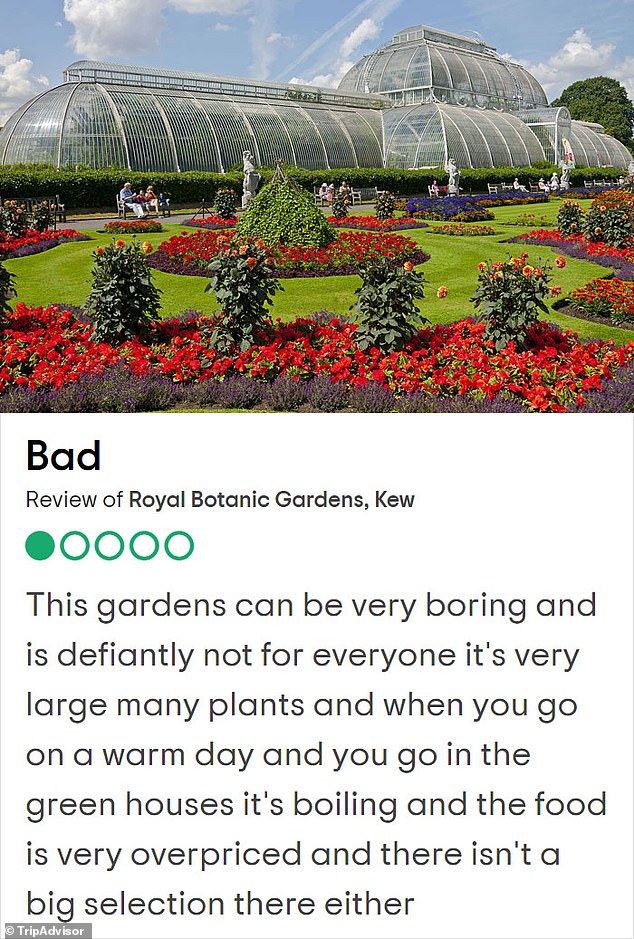 A planted review! Kew Gardens is one of the prettiest places in London with more than two million people visiting a year and more than 27,000 plants, but this reviewer said it ‘wasn’t enough’ 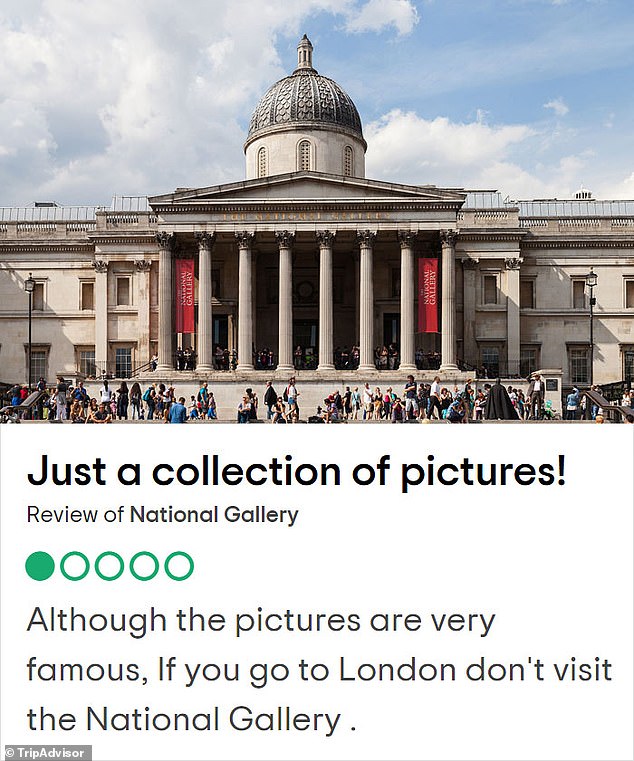 An art gallery full of pictures! Another reviewer called the the National Gallery ‘just a collection of pictures’ that they didn’t recognise