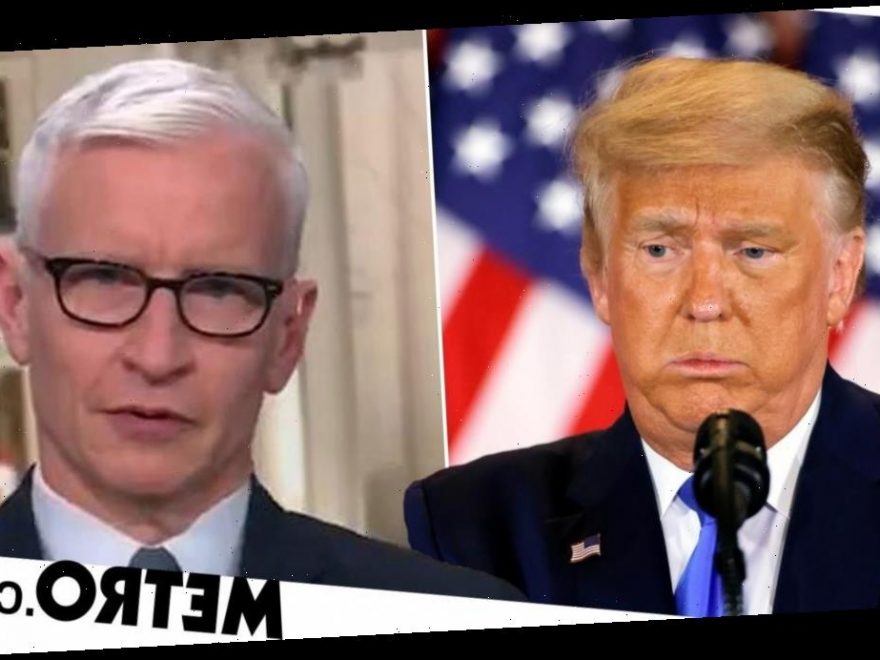 Donald Trump has been called ‘an obese turtle on his back flailing in the hot sun realising his time is over’ by a prominent CNN anchor.

Political commentator Anderson Cooper’s comments came after the president stunned the world with an extraordinary speech that claimed the US election had been ‘rigged’, as Joe Biden closed in on the presidency.

The Republican leader peddled a conspiracy theory in a news conference on Thursday night, claiming the Democratic Party was trying to ‘steal’ the presidency with ‘illegal votes’ – despite there being no evidence to suggest foul play.

American journalist Cooper issued a scathing review of Trump’s first appearance in two days, telling CNN viewers the politician wanted to ‘take America down with him’.

He said: ‘That is the President of The United States. That is the most powerful person in the world.

‘Yet we see him as an obese turtle on his back flailing in the hot sun realizing his time is over, but he just hasn’t accepted it.

‘And he wants to take everyone down with him, including this country.’

Cooper added that the examples of fraud put forward by the president – including papers on windows and things he’s seen on the internet – were not ‘actual evidence’.

He said: ‘I don’t think we’ve ever seen anything like this from the president of the United States and I think, as Jake [Tapper] said, it’s sad and it is truly pathetic and, of course, it’ll go through the courts, but you’ll notice the president did not have any evidence presented at all, nothing, no real actual evidence of any kind of fraud.’

Joe Biden took the lead in key battleground state Georgia on Friday afternoon, with the US election result still resting on a knife-edge three days after the public cast their votes.

The Associated Press claims Biden has got a total of 264 electoral college votes and puts Trump on 214, with 270 needed to win the race. Other outlets have not called Arizona for Biden, putting the Democrat candidate on 253.

At least seven major TV networks cut off Trump during the White House address in which he called the entire presidential race into question. Fox and CNN were among the few channels to air it in full.

CNN’s Jake Tapper called it a ‘sad night’ for Americans who had to hear the president ‘try to attack democracy that way with this feast of falsehoods’.

‘When he wins a state it’s legitimate, when he loses it’s because the vote is being stolen from him. It’s not true, it’s frankly pathetic.’

Get in touch with our news team by emailing us at [email protected].

Follow our US election live blog for the latest news and updates on the 2020 election.

Who is currently leading and what happens if neither candidate gets 270 votes? Find out here: