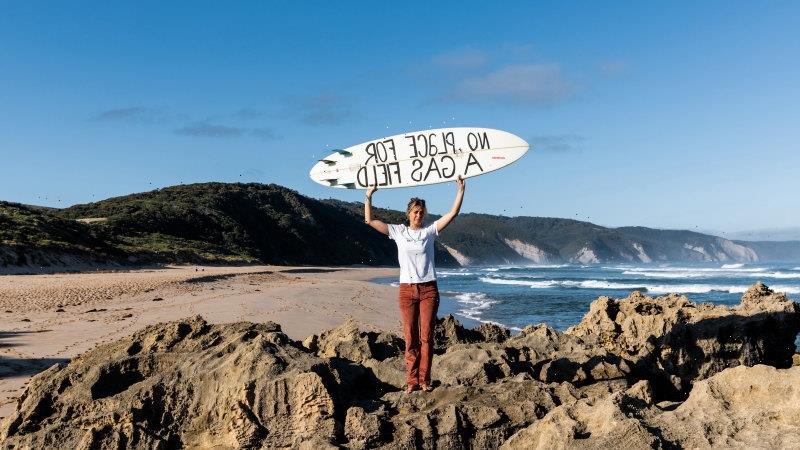 The Victorian coastline near the famous limestone stacks of the Twelve Apostles is well known to surfers for its long exposed beaches and powerful ocean waves.

For Belinda Baggs – founder of emissions reduction advocacy group Surfers for Climate – this stretch of wild ocean is the focus of a campaign against a proposal to drill for gas under the Port Campbell national park, about five kilometres from the Twelves Apostles. 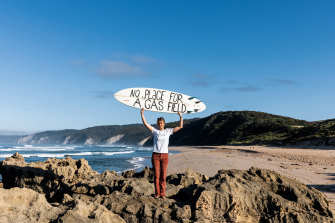 Belinda Bagg, one of the founders of Surfers for Climate, doesn’t want any gas production near the Twelve Apostles. Credit:Zoe Strapp

The drill site is almost half a kilometre outside the national park, but to reach the offshore gas reservoir the bore extends 3.5 kilometres out into the ocean, including a 1.3-kilometre stretch beneath the park.

“To consider approving and investing in fossil fuels during a climate emergency when we’re already seeing catastrophic weather events across the country is just disgusting,” says Ms Baggs. “Once infrastructure is set up, it paves an easier path for more and more gas.”

The Beach Energy proposal raises serious questions about the government’s plans for the next decade of gas in Victoria.

Environment groups say it goes against recent advice from the International Energy Agency that the route to net zero was “narrow and extremely challenging”, and that no new fossil fuel projects should be approved.

But analysts and Australia’s energy market operator, AEMO, warn that Victoria and the other southern states face a shortfall of natural gas on peak-demand winter days by 2024, and probable gas price rises.

Victoria is the largest consumer of residential gas in Australia, which accounts for about 15 per cent of the state’s greenhouse gas emissions.

Graeme Bethune, chief executive of Australian energy consultancy EnergyQuest, says the Bass Strait reserves are rapidly declining and piping in gas from the larger fields in Western Australia or the Northern Territory is prohibitively expensive.

He acknowledges the tension between energy security and reducing emissions: “It’s a matter of how you turn the ship around, and inevitably you can’t do it overnight.”

A floating gas terminal, such as one proposed by Viva Energy for Geelong, which could import gas into Victoria, could be a more appealing short-term way to address a gas shortfall, Mr Bethune says.

Not everyone is convinced there is a looming gas shortage. Environment Victoria analysis found there is enough gas supply capacity in Victoria until 2027. Over the following three years there is a shortfall of between 26 petajoules (PJ) and 85 PJ, but the adoption of gas-demand reduction measures, like increasing energy efficiency and electrification eliminates the forecast shortfall.

In March last year, the Labor government overturned a long-held moratorium on conventional onshore gas exploration, though fracking remains banned. Friends of the Earth spokesman Cam Walker says the Beach Energy proposal is significant because Victoria has not had any onshore gas development since 2014. 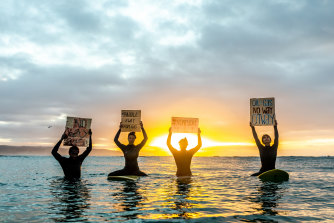 Surfers are banding together to fight the plans.

“Gas as a transition fuel [away from coal] is an argument from the 1990s – it’s clear from the climate science that the time for new gas is over,” Mr Walker says. “Gas is in rapid decline, particularly in the Bass Strait, and we need to get off it as a matter of urgency.”

Later this year the Victorian government will release its gas substitution plan, which it says will detail decarbonisation of the gas sector while ensuring residents have reliable energy.

For now, it is supporting gas exploration. Last week the government and opposition voted down a motion from Greens deputy leader Ellen Sandell that would have prevented the Beach Energy plan. It still requires approval from the state’s resources regulator.

“We need to protect our environment and precious animals by transitioning away from fossil fuels, not drilling for more of it,” says Ms Sandell.

In a statement, Beach Energy managing director Matt Kay said even as Australia moves to more renewables it will continue to need natural gas into the future.

“With supply shortfalls forecast in Victoria as early as 2023, the natural gas coming from Enterprise [the project] is sorely needed,” he says.

A Victorian government spokesperson said the state was decarbonising its economy at the most rapid rate of any major jurisdiction in Australia, and since 2014 had cut emissions by 25 per cent.

“The government is intent on solving the next big emissions challenge in the energy sector by developing a Gas Substitution Roadmap,” they said. “We are the only state to do this important work and we stand to reap significant benefits as a result.”