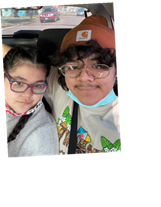 For parents of children with special needs in Texas, difficult situations were made all the more challenging after an unprecedented winter storm upended their daily routines, knocking out power and prompting a scramble to safety.

Millions of Texans were forced to get by without power and water for days on end, but for moms like Judith Carter and Sylvia Cerda Salinas, who both have sons with autism, the challenges posed an extra level of difficulty.

"My special needs son and I have been through the wringer," Carter tells PEOPLE in this week's issue.

Carter lives in Dallas with her 16-year-old son Miles, who has a life-threatening form of epilepsy, as well as autism.

She and Miles were staying in a hotel when the storm hit, and had to take refuge in the warmth of her car once the sun went down.

"It's a tricky balance," she says of her son's special needs. "We hadn't eaten all day. We had snacks, but he didn't want to eat what I could give him. He wanted a meal, because he's a growing teenage boy." At one point, in order to get water that would allow them to drink and to use their toilet, Carter, a fine dining manager who is currently laid off, had to trek a third of a mile in the freezing cold.

"Miles quit eating and quit using the restroom. He's so stressed out in his brain because of all this stuff happening. He can't communicate," she says. "This is not just historic, but it's to a point of catastrophic for some families. On the surface what you see is a devastation to any disaster – there's unforeseen ripple effects down to the people that you never hear about."

Meanwhile, more than 500 miles south in McAllen, Salinas was also struggling to keep her family warm. A married mother of five, four of her children live at home — her youngest, a 7-year-old boy, has autism, while her 13-year-old son and 11-year-old daughter have diabetes and are on two types of insulin and Metformin tablets. "My youngest was our big, big concern," she tells PEOPLE, adding that in addition to autism, her son also has ADHD and is a little person, as he is missing a chromosome and has an echogenic pituitary gland.

The Salinas family's troubles began the morning of Feb. 15, when they awoke to find their power out, leaving their entire neighborhood cloaked in darkness as temperatures continued to drop.

"We had a little bit of money and we started calling hotels, but I think everybody thought the same thing, and all the hotels were booked," she says. "We moved the mattresses to the living room and piled up every blanket and bedspread we could find. We could see our breath."

For more on the Texas deep freeze, pick up the latest issue of PEOPLE, on newsstands Friday, or subscribe here.

At one point, Salinas says, the temperature inside the house was 42 degrees — and since they live so far south, the warmest clothing they had was long-sleeved shirts and leggings and jeans, which they layered as much as they could.

"The city opened warming shelters, but because of COVID and the kids' special needs, I didn't want to chance it. So we rode around in the car with the heater on," she says.

Just as Carter did to keep her and Miles warm, Salinas crammed her family into their 2004 Toyota Matrix to search for supplies, as local grocery stores were out of staples like eggs and milk.

For her youngest son, no milk was an issue: "Part of my 7-year-old's condition is his OCD, and he's used to his bowl of cereal," she says.

To lighten the mood, she and her husband tried to treat the extraordinary circumstances like a game.

"We made it like a scavenger hunt to drive around looking for milk," she says. "We had to watch our gas gauge. Back home the nights were horrible. I felt like I couldn't keep my kids warm no matter what I did. I kept checking them to make sure their skin was not cold."

"We would joke and laugh, and we would tell stories. My daughter loved telling scary stories, so we tried to make it as fun as we could. We just tried to not let them think about it," she adds.

The power outages also proved troublesome for her two diabetic children, as they keep their insulin in the fridge. Salinas says they were able to salvage some of the back-up medicine they keep on hand, but some was lost after two days in a powerless fridge.

Salinas' plight drew national attention when she appeared on CNN, and soon, a stranger reached out on Facebook to say he'd managed to pull some strings and secure the family a room in a hotel. A GoFundMe page for the family has also raised more than $14,000.

"We all have a long road ahead," says Carter, "but we will get through this."