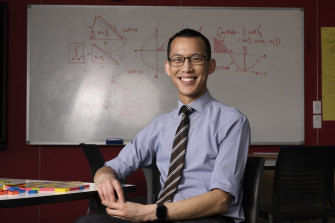 Maths teacher Eddie Woo says maths is in everything we love, we just have to know where to find it.Credit:Louise Kennerley

Eddie Woo is used to adults blurting out their school maths trauma to him. It’s why the singer Odette said to him, “I’m not into that,” as they waited backstage to deliver a TED Talk. It’s why, within five minutes of meeting him, I fess up to doing Maths in Space for my HSC. And, worse, I cheated on my mentals tests in year 5 and 6 pretty much every day.

“It’s OK, relax,” he says after I unburden my mortal maths sins. I am not dumb, he tells me, merely “mathematically disenfranchised”.

“When you meet someone, it’s like, ‘Hey, who are you? What do you do?’” he says. “Normally, when people find out that I’m a mathematics teacher, that is either a) the end of the conversation, or b) ‘It’s your fault. All of the trauma that I’ve experienced learning this subject down the years, I place all the responsibility and blame on you, you mathematics teacher.’ And I get it. A lot of people had a terrible experience with maths.”

He even jokes that maths teachers are the second-most hated teachers at school. The most hated? “Deputy principals because they give out a lot of detentions.”

Woo is sitting behind his very neat desk in his very tidy office at Cherrybrook Technology High School in Sydney’s north-west. He is exceedingly cheery and, very neatly, wearing a tie with his shirt sleeves rolled up. My maths teachers mostly frowned, wore long socks and shorts that finished well above the knee.

“I wear this because if I don’t, I’ll look like I’m 18 years old,” he says. “I’ll get caught out of uniform or something like that.” It’s happened before. “Our uniforms are white shirts and red ties,” he says, laughing. “And there’s a beautiful red tie that I have at home that I can never wear again.”

At 36, Woo is head teacher of maths at the school and leader of the Department of Education’s Mathematics Growth Team. On the wall, meanwhile, is a gold plaque that officially certifies he has passed 1 million subscribers on his YouTube channel.

He gets embarrassed when I point it out. That’s pretty cool, right? “It’s very funny because I have friends who are proper YouTubers, it’s their full-time job, they put all their effort into that. And, obviously, that is not my job. This is my job,” he says, motioning around his office. “So I feel like a bit of an impostor when they really hustle and put so much effort into it and I’m like, ‘Yeah, it’s just my little thing on the side.’”

That little thing on the side – WooTube – is what shot Woo to fame about 10 years ago, when his online maths video tutorials became a hit because of his easygoing and relatable approach to the subject. Those videos led to books, a TV show called Teenage Boss, in which kids took control of the family budget, and appearances on everything from Play School to Australian Story. He has a string of accolades, everything from local hero awards to honorary fellowships, but what he values most is teaching.

I love to think about puzzles, I’m very curious and inquisitive, and I do look at the world through a mathematical lens.

“If you had asked 23-year-old me, who had just entered the workforce, ‘What do you love about teaching?’ I would have said I love that moment of clarity. You’re talking to kids, you’re explaining a concept and it’s like, confusing, confusing, confusing, and then suddenly, their eyes go wide and they’re like, ‘Oh, I get it.’ It’s that click of satisfaction that it fits in your brain.

“That’s what I would have said 15 years ago, and that’s still true, but there are so many more things I love. Now, for example, I talk to students who hate being in maths and a lot of those students have decided, ‘This is a subject that I’ve pretty much closed the door on for the rest of my life. And I will just get by without it, thank you very much.’

“To be able to take a student like that and over the course of 12 months, or longer, to actually change their mind around what they themselves are capable of, watching that happen is such a gift.”

For adults who, ahem, struggle, it’s about finding maths in something you love. For Odette, it was music (the spacing out of the frets on a guitar), while for many of his students it’s the maths in sports (statistics) or baking (scaling up a recipe). For writers, it’s the mathematics of networks and the relationships that make a story work. “Maths is hiding in everything that we love,” he says. “You just have to find it. And that’s my job [as a teacher]. That’s not yours.”

His new books are part of a planned series, Whodunnit Eddie Woo, and they feature a young hero called, funnily enough, Eddie Woo. He can’t ride his skateboard but he can solve mysteries and do maths with his two super-sleuth sidekicks, Rusty and DT.

Woo co-writes the books and they are chock-full of maths and so pure of heart – saving a nursing home! From a big bad gas company! – that it’s not in the least surprising Woo was approached by his publisher because they thought he had a “personality they could grab on to”.

“He’s kind of like who 12-year-old real Eddie wanted to be,” Woo says of his alter ego. “He’s much more brave and popular than I was when I was 12 years old. I didn’t have any friends when I was 12. I was mostly bullied as a child, actually. However, he is the core of me, which is I love to think about puzzles, I’m very curious and inquisitive, and I do look at the world through a mathematical lens. That’s 100 per cent me.” There he goes with the maths again …

The real Edie Woo grew up in North Rocks in western Sydney, a culturally diverse area, but was picked on throughout primary school. His parents, who are ethnically Chinese, moved here from Malaysia for work opportunities before Woo was born.

“I’ve lived here my entire life but when you’re a second-generation migrant you don’t belong anywhere,” he says. “I certainly don’t belong back in Malaysia, because I go there and I speak English, that’s it. So they’d be like, ‘You foreigner. You come from the West, you can’t speak our language, you don’t understand our culture.’

“And here, I also didn’t really belong either because just my face. And people were like, ‘You’re not from around here, are you? Where are you from?’ And I’m like, ‘Camperdown.’ And it’s, ‘No, where are you really from?’ I’m like, ‘North Rocks.’” 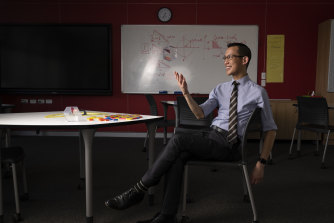 His older brother and sister copped the bullying much worse but their parents told them to “stick it out”. “My parents were basically like, ‘Yeah, we know it’s no fun being treated like this at school, however, in the scheme of things, it’s not that bad,’” says Woo. “‘This is a part of the price that’s worth paying to live in this country. And you will come good.’”

Coming good is an understatement. He “fell into” maths teaching after being persuaded to give it a go at university. He had planned to teach English and history but those skills have not been entirely abandoned. Good teaching, he says, is about storytelling, while his high school drama teacher always tells him he gets more use out of his drama skills than anything else.

It’s also surprising, but heartily encouraging, that Woo is still in the public education system. Surely, with his skills, talent and profile, the big private schools have come knocking with cash to match?

“Who knows what the future will hold,” he says. “But for me, the reason why I’ve always worked in public schools is because I always attended public schools. And I feel like I owe a debt of gratitude to this system that I got this world-class education for free. And I can never pay back my teachers but I can pay forward to the next generation.

TAKE 7: THE ANSWERS ACCORDING TO EDDIE WOO

“I love working with our state and our country’s most disadvantaged and needy students, and the vast majority of them, obviously, are in public schools. So that’s work that I love to do and I feel there’s an attachment of moral purpose to that as well.”

Talking about the country’s most needy students, the big question is: can he help a “mathematically disenfranchised” journalist solve an equation – √9 + 2 (3 x 2) – pitched at 12-year-olds?

“We start from inside the brackets,” he says.“And we get three times two. That’s six.”

Yep, no arguments there.

“Then you go outwards from there. So you’ve got a six there, the two outside those brackets means multiply the two and the six, which gives you 12. So then we can pause there. Then there are two other things to work out: a square root of nine and a plus.

“So the square root takes over first. So square root just means what is the length of the sides of a square that would have this area. So those sides would be three times three. So three plus 12, that gives you 15.”

It’s not quite an aha! moment, but it’s safe to say I’ve been wooed.

Eddie Woo’s books Time Out and Team Trouble are out now.