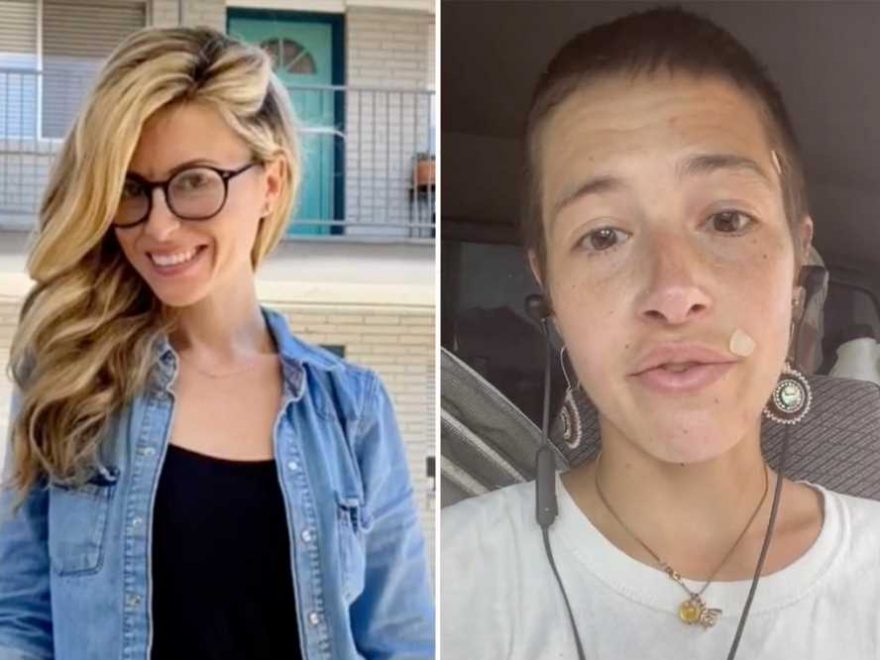 These Queen Bees need to bee-have.

A Los Angeles beekeeper proved the industry ain’t so honey-sweet after lashing out at a fellow bee gal for allegedly making a mockery of the profession. A TikTok video of her stinging attack is currently causing a buzz on social media.

The feud was reportedly ignited by a series of viral beekeeping videos posted by Texas beekeeper Erika Thompson (@texasbeeworks), who boasts a whopping 6 million followers on TikTok.

The latest tutorial, which has over 18 million views, shows the blonde bombshell removing a queen-less colony from an umbrella while wearing only a denim jacket and no protective gear.

“So I started scooping bees off the umbrella and putting them into the hive,” intones Thompson soothingly while snatching up the stinging insects with her bare mitts à la “Candy Man” in an effort to find the queen.

Despite her lack of bee-proof apparel, Thompson suggested she was in no danger from the homeless colony, which she claimed were “very docile” as they “don’t have any resources to defend.”

Later on, the steel-nerved bug whisperer supposedly saves the bereft bees by gifting them an “extra” queen that she’d been keeping in her jean shirt pocket.

“I put the bees in my apiary so they can continue the important work they do in a place that’s safer for them and for people, and it was another great day of saving the bees,” she cooed on camera. Needless to say, TikTok was enthralled with Thompson’s supposed “Wicker Man”-esque connection to the tiny critters.

“This really is the coolest thing ever,” fawned one enchanted fan on TikTok.

However, not everyone thought her methods were so bee-utiful. Los Angeles beekeeper Friday Chamberlain, who appears to work for the West Hollywood-based organization LA Honeybee Rescue, accused Thompson of “setting a dangerous precedent” with her protection-free approach.

“What she is doing — opening up hives with her hair down, wearing dark clothes with exposed skin — is dangerous,” fumed the shorn-headed critic, who goes by @lahoneybeerescue on TikTok.

Indeed, Hilary Kearney, a beekeeper and the author of queen bee bible “QueenSpotting,” told the Cut said such attire is particularly problematic as “bees have evolved to be defensive towards dark colors because of bears and skunks and other predators that are typically furry and dark.”

While Chamberlain’s “100% OK with” Thompson demonstrating the docility of swarms, “the fact is, she goes into removals without wearing any safety gear,” explained the bug specialist of her seemingly Treadwellian approach.

The incensed insect expert also wasn’t a huge fan of the accused huckster’s flowing locks, saying she keeps her own mane short so “bees don’t get caught in it” and sting her.

Not only that, but the Los Angeles keeper claims that Thompson stages her removals, which is why she’s able to conduct them sans-PPE.

“She looks pretty doing it and that’s because it’s faked,” Chamberlain scoffed on camera, explaining that her husband pre-cuts the combs for her “very courteously.”

“I’m straight up calling her out,” continued the bee shepherd. “@texasbeeworks, I see you, we all see you, all of us female removal specialists, we see you, we know you’re faking.”

Needless to say, the online apiary was abuzz over the dueling keepers viral TikTok bee-f.

“I never knew I wanted to see bee keeper beef until now,” wrote one Twitter comedian.

Some flocked to Thompson’s defense with one backer writing, “What is fake? She is literally filming herself around bees and scooping them in her hand. Are the bees fake? Lol I’m not following.”

Another commenter correctly observed that the Texas bee wrangler also posts videos of herself with “hair up, protective gear all that on her Instagram.”

“Saving bees is saving bees wether her husband does the heavy lifting or not lol seems like this chick just clout chasing by trying to call her out,” they wrote in defense of their queen-bee keeper.

However, while experts agreed that Thompson’s gear-free approach wasn’t altogether problematic, they admitted that it could give amateur keepers the wrong idea. Dr. Judy Wu-Smart, research entomologist at the Bee Lab at University of Nebraska–Lincoln, told the Cut that Thompson’s technique isn’t necessarily dangerous for “experienced beekeepers who understand the biology and behavior of honeybees” and that many beekeepers work with minimal protection.

However, “it’s not recommended for just anyone to try, of course,” she said.