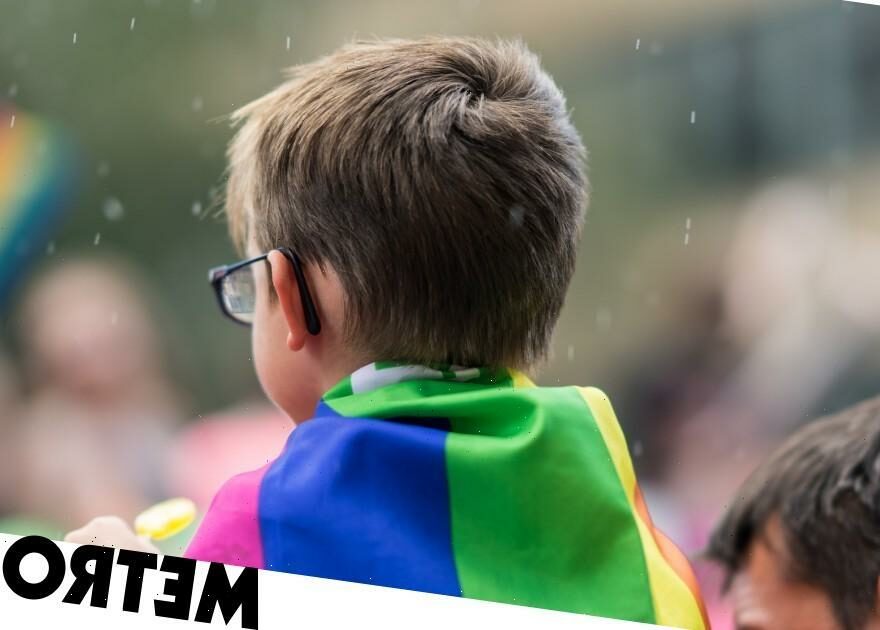 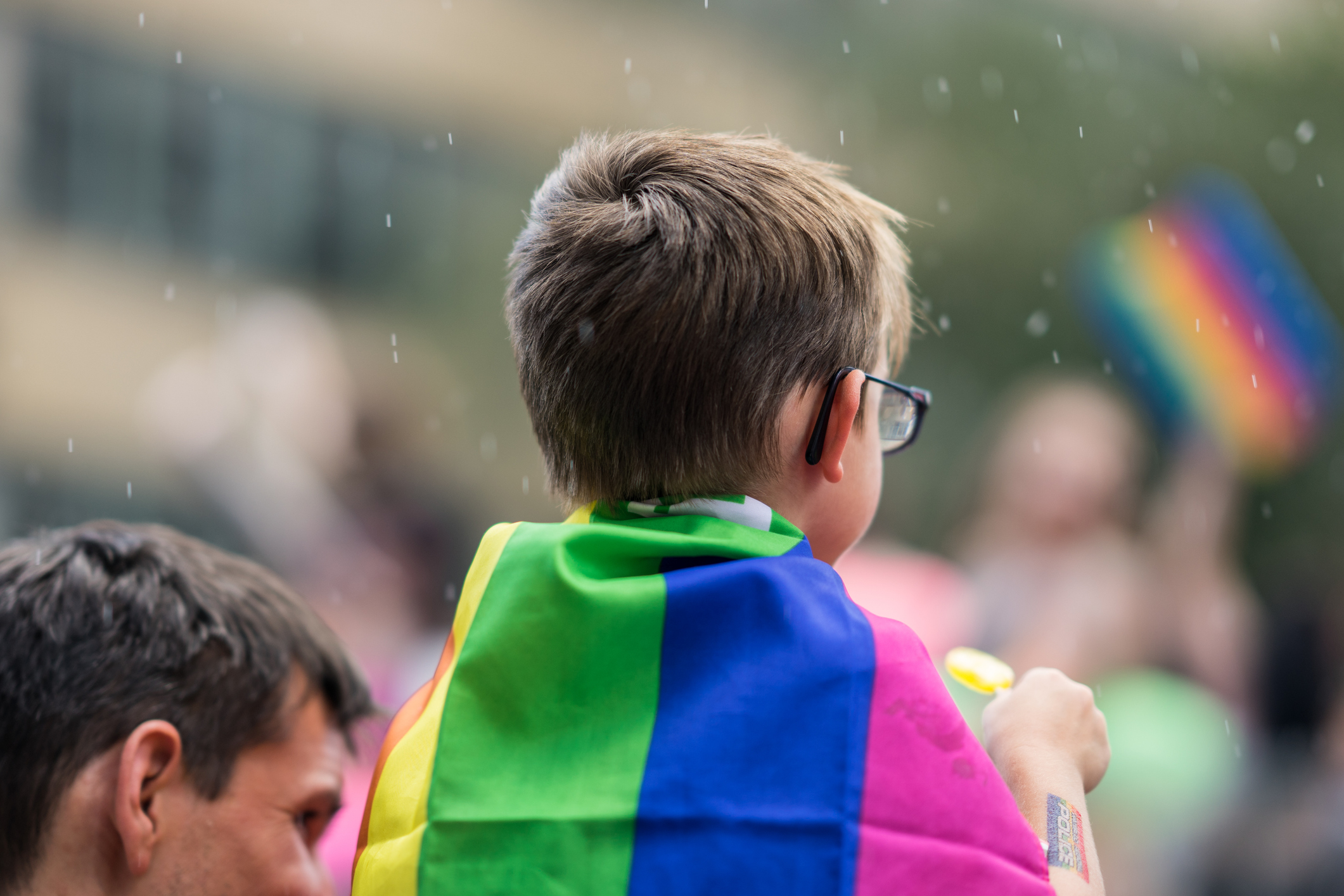 It’s now been over six years since my youngest child, Peter*, came out to me as trans.

I can still remember it clearly. Peter (who now uses both ‘he’ and ‘they’ pronouns) had been desperately unhappy for a while and I had no idea why. They would lay in their bed and cry uncontrollably. I felt like the worst mother in the world.

But then one day, we started talking. I asked what was wrong. I told him it didn’t matter what it was, I think I said ‘even if you have done something illegal or you want to be a boy’.

Looking back, I have no idea why I said that, but I wonder if it had something to do with my other child, Jem, who had made friends with a trans boy whose parents weren’t supportive.

These parents refused to accept their child as trans, were still using his birth name and she/her pronouns, and did not allow him to come out at school.

Jem’s friend was struggling with binding safely so my child had come to me for help. A binder is a top that flattens the chest using compression, hiding the appearance of having breasts.

At the time, I had very little knowledge but I encouraged him not to use methods that were likely to damage his rib cage and suggested he get medical help.

I think that experience inspired my flippant remark to Peter, and that opened the door for him to feel safe to tell me that they were transgender.

They had done plenty of research, and had watched many YouTubers – who are trans** – and telling their own stories so I think Peter had a pretty good idea about things.

At the point of Peter coming out to me, I felt relief! Now I knew what was wrong, I could try and help.

At the point he came out, I just wanted to reconnect with a very unhappy child and help them in the now.

The first thing Peter asked me was for a binder, and after my experience with Jem’s friend I knew what that was and how to help right away.

Prior to this – unbeknownst to me at the time – Jem, had also been thinking about their gender identity by exploring transgender and gender questioning groups online.

There had been no signs of this when either of my children were growing up.

They both loved pink and princesses and chose to play with dolls, even though we always offered them all kinds of different toys and clothes.

Peter was at an all girls’ school at the time, and we both decided a mixed one would be better. Unfortunately, the first one I spoke to seemed to still be in the dark ages.

They were not going to accept Peter as a boy. I was distraught. I didn’t know where to turn as I had no idea if any school would accept my child for who they really were.

I soon turned to the internet for help – and in my searching I found an organisation called Gender Identity Research and Education Society (GIRES) so I called them and spoke to a lovely staff member who signposted me to Mermaids.

That was such a happy accident and even though that was a real low point for me early on, looking back, I am so fortunate that it led me to find Mermaids.

Mermaids is a charity that supports trans, non-binary and gender questioning children and their families.

They reassured me that Peter should be allowed to wear whichever uniform they wanted and be addressed as a boy and so we set about finding a new, more accepting school.

Very early on, we attended some residential weekends.

At a Mermaids residential, families can meet each other and have an opportunity to be in a safe space away from the real world for a few days and really bond with others who know a bit about what you are going through.

There are information sessions for parents and lots of activities for the children and young people.

On these weekends, Peter found a place to truly relax and be himself.

And the friends I made there will be friends for life, we bonded over something enormous in our lives and continue to support each other through the ups and downs.

It was at Mermaids residentials and on the Mermaids forum where I learned the most about being trans – all the possible medical treatments that Peter might choose, all the difficulties that we might face as a family but also many, many moments of trans joy.

I have met some amazing people and they are very special friends now.

I have gained a great deal from being able to meet other Mermaids families. I am fortunate enough that I live near a local group meeting and we meet every month.

At these local meetings you see the trans children and young people truly blossom. They arrive, nervous, hesitant and sometimes still with old names, pronouns and clothes.

As the months go on, you see them grow into their true selves, encouraged by the realisation that they are not alone.

It’s here that parents and carers get the support and reassurance to allow them to be free to be themselves.

A residential was where Jem was able to finally feel comfortable with their own non-binary identity.

They didn’t really need to come out to Peter and I, they just went around all weekend proudly wearing their badge with ‘they/them’ on it and so we just knew.

Peter being trans and us working through some of their transition together has brought us a lot closer.

In the early stages, I was very much Peter’s voice and worked hard with school and then with the Gender Identity Development Service (GIDS) to get what he needed

First of all, we needed Peter to be diagnosed with gender dysphoria. That ‘opens the door’ to access further intervention and is true whatever age you are.

I hope that any parent whose child is gender questioning will listen to their child, let them take the lead and walk with them wherever the path takes you

At the time, what Peter wanted was to start taking testosterone. The protocol is for a young person to be on hormone blockers for at least 12 months before they will be prescribed gender-affirming hormones and this only happens once they are 16 or older.

So to start, we worked on getting the diagnosis, then we talked with the GIDS team about hormone blockers.

Once Peter was on blockers, we talked about testosterone, talking a lot about what was to come or what changes they might see in their body when they started testosterone.

I feel like we have been on this journey together and although they are now grown up, I think there is a special bond between us because we have experienced this side by side.

When both of my children were little, I didn’t really think about what their futures would look like. I have always told them that it didn’t matter to me whether they had male or female partners.

I have never really dreamt of university degrees, white weddings or specific careers.

What has always been important to me is that they are happy. I guess that might be why I have not struggled as much as some parents with a grieving process.

That, and the fact that when Peter came out, I felt like I had got them back rather than lost them.

I know a lot of parents really struggle with a sense of loss and I totally understand that.

They feel they are losing their son or daughter when they start to transition. There is a new name and new pronouns, as well as quite often a change of appearance, such as hair styles and clothes.

Sometimes, the dreams – like walking them down the aisle in a white dress, or having grandchildren – disappear in a flash.

But for me, I had lost Peter long before they came out, and actually their coming out meant that I was able to reconnect with them.

I know that whatever either of my children look like on the outside, they are the same people on the inside and I love them both and am so, so proud of them for being brave enough to be their true selves.

I know thinking that your child might be transgender is scary.

There are so many things to be worried about navigating the world as a gender nonconforming person.

But what I saw in my child – and I see regularly at Mermaids meetings – is the happiness and self confidence that comes from being allowed to express themselves.

I hope that any parent whose child is gender questioning will listen to their child, let them take the lead and walk with them wherever the path takes you.

It’s not an easy one but it will be one that means you truly get to know your child in a way that not every parent gets the opportunity to do. There is nothing better than seeing them being their authentic selves and being happy.

After all, isn’t that really all we should want for our children?

* Names have been changed

This year marks 50 years of Pride, so it seems only fitting that Metro.co.uk goes above and beyond in our ongoing LGBTQ+ support, through a wealth of content that not only celebrates all things Pride, but also share stories, take time to reflect and raises awareness for the community this Pride Month.

And we’ve got some great names on board to help us, too. From a list of famous guest editors taking over the site for a week that includes Rob Rinder, Nicola Adams, Peter Tatchell, Kimberly Hart-Simpson, John Whaite, Anna Richardson and Dr Ranj, as well as the likes of Sir Ian McKellen and Drag Race stars The Vivienne, Lawrence Chaney and Tia Kofi offering their insights.

During Pride Month, which runs from 1 – 30 June, Metro.co.uk will also be supporting Kyiv Pride, a Ukrainian charity forced to work harder than ever to protect the rights of the LGBTQ+ community during times of conflict, and youth homelessness charity AKT. To find out more about their work, and what you can do to support them, click here.