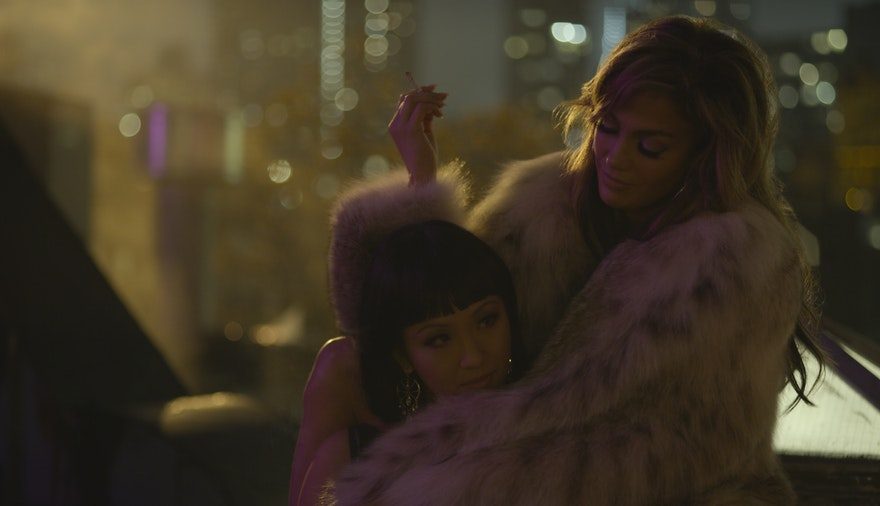 There is a scene towards the beginning of Hustlers (out Sept. 13) in which Jennifer Lopez invites Constance Wu into her fur coat. Wu’s character, Destiny, is the new girl at a strip joint and she comes to the roof to find Lopez’s Ramona, the veteran queen of the club, having a cigarette break. "Climb in my fur," Ramona tells a chilly, vulnerable Destiny. And in that moment, everything changes. The two women’s future — in which Ramona will lead Destiny into a life of crime — is laid out. As a viewer, it’s hard not to be all-in, too.

"I felt like the minute Ramona invites her into her fur coat, it’s pretty clear that she’ll follow her to the ends of the Earth," writer and director Lorene Scafaria says with a laugh when we speak over the phone in August. "It’s a pretty irresistible offer."

The scene starts with Lopez sprawled out against a skylight, a massive fur draped over her skimpy stripping outfit. In that moment, it’s hard not to giggle at the self-awareness, because Ramona seems at first like an exaggerated version of Lopez’s rich, luxurious self. By the end of the scene, that’s over. Ramona, not Lopez, has convinced Destiny to work with her at the club. She’ll show her the ropes, give her pole dance lessons, and teach her how to make more money. There’s a haunting feeling that this is transactional. They just don’t know yet that Destiny will provide unwavering loyalty while the two women drug men with a mixture of MDMA and ketamine and scam them out of money.

This way of establishing Ramona and Destiny’s relationship was so important to the story that it was the very first scene Scafaria wrote. It also ended up being the last one she filmed, meaning Lopez and Wu had already gone through everything with their characters at that point.

"It was always, for me, the heart of the story," Scafaria, who is also known for Seeking a Friend for the End of the World and The Meddler, says. "I had just envisioned that scene, that rooftop, that sort of mama bear, baby bear feeling. And once it was Jennifer Lopez that scene became this thing for me where I just couldn’t wait to shoot it." She adds, "I just felt like if she invited you into her coat you’d probably do the same thing. I would be no match for that offer."

The New York magazine article on which the film is based — "The Hustlers at Scores" by Jessica Pressler — does not include a friendship between the characters that inspired Destiny and Ramona to the extent that the film does, but it is clear that they must have had quite the connection, at least for a while.

"I was jumping off of the article and kind of reading between the lines and realizing that there was a real friendship story here that these two women were partners in something," Scafaria says. "And I’m not sure that they’re talking anymore when I’m reading that article." She adds of Ramona’s character, "I was really fascinated by exploring that kind of relationship between a character who is a stronger sort of ringleader whose attention means the world. They’re like the sun and when they’re shining on you, it means so much, and when they’re not, it’s cold in the shade."

Scafaria wasn’t able to consult the real women involved in the story for Hustlers, but she did end up meeting Roselyn Keo, who inspired Destiny, the day filming wrapped. She also met a cohort named Karina Pascucci. She didn’t get to meet Samantha Barbash, the woman behind Ramona. "They’re just normal women who have moved on with their lives and are in a different chapter of their lives," the filmmaker says. "Even though it wasn’t about making their exact life story, I’m grateful that they know I was trying to approach the project with empathy and love, the same way I would empathize with any character that I’m writing."

When it came to casting these roles, Scafaria says that once she got far enough into the writing process to consider who she might want, it was immediately apparent that Lopez was Ramona.

"She just has those qualities, that complexity that is required for Ramona," the director explains. "She is both maternal and warm and also can be like a cold killer, so someone like Jennifer, who is so warm but is also so cool. You know, it requires an actor who is all of those things and has that incredible range, but my goodness, is she singular in every way. She is obviously an incredible performer and a dancer, and I think because she’s so many things — a brand — that people forget what a gifted, talented actor she is. It was really fun to see her disappear into a role that somehow is familiar, but also so different from what we get to see her in."

As for Wu, "Tears shot out of my eyes during Crazy Rich Asians, and I just had to meet her," Scafaria says. "She’s so smart and sensitive and had so much to say about the character and the relatability of the character. We were really excited to tap into that feeling of loneliness and isolation before you make the best friend of your life."

Seeing the actors together for the first time was everything Scafaria had hoped. "I just envisioned this chemistry between them and I thought they would just be so great together, and then when I got to see them standing next to each other at the camera test for the first time, I was just so moved by that exact feeling of: I’m not looking at Constance and Jennifer anymore, I’m looking at Destiny and Ramona."

And the fur coat scene summed up that feeling for Scafaria, and for the film as a whole since it was the last one shot. "That scene was something that was in my mind for so long and by the time we were there filming it it was very emotional to see the two of them there together."