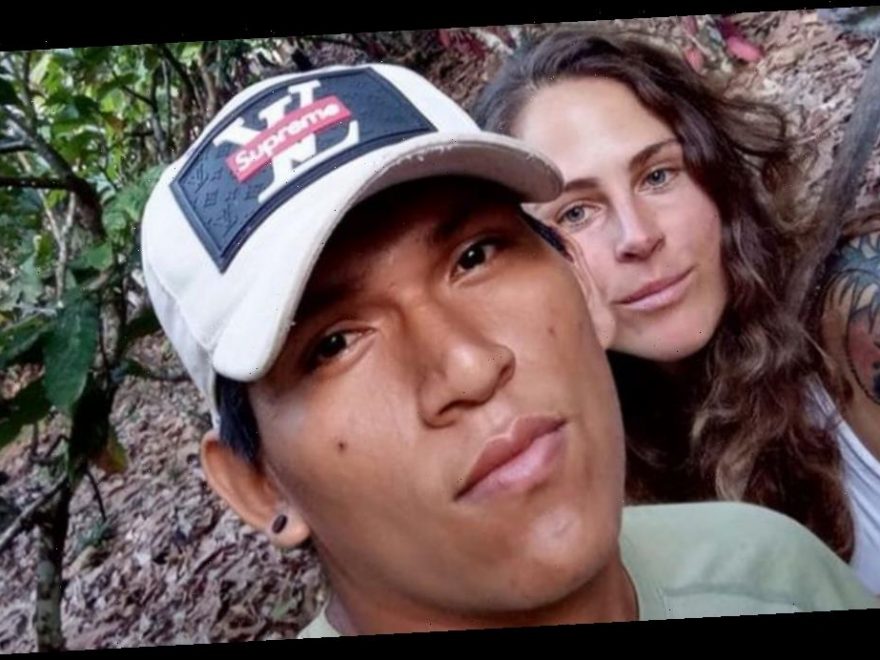 A nude yoga teacher has traded Britain for a life of bare necessities in the Amazon jungle with her chocolate-farming toyboy lover.

She never imagined she'd be starting 2021 living deep in the Amazon rainforest.

The 33-year-old is living 70 miles from civilisation with no running water and has to do her washing in the local river.

But despite the jungle heat, ravenous insects and back-breaking toil, she's chuffed with the lifestyle.

Caroline has opened up about how the romance blossomed just before going into lockdown.

The 33-year-old, who lived in London, said: “2020 was the most unpredictable year on record, and I never imagined I’d begin 2021 living deep in the Amazon rainforest.

“But waking beside Rómulo each morning to the magical sound of howler monkeys calling across the jungle canopy makes all the hardships worthwhile.”

Caroline jetted to South America in March 2020 to spend 10 days teaching yoga on the Hoja Nueva retreat near Puerto Maldonado after an invite from a friend.

She had been making a living running naked yoga classes and providing massage therapy in London’s trendy Stoke Newington – but escaped the UK before the first lockdown was announced.

Caroline, originally from Oxford, said: “From Puerto Maldonado it was a two-hour drive, then a boat ride and a trek to reach the retreat."

She continued: “I was feeling really jet-lagged when I arrived, but the place had amazing energy and before long I was mulling over plans to extend my stay so I could see more of Peru.

“I noticed Rómulo, he worked as the handyman and looked after the animals.

“In the evenings, we’d all hang out together in a group, and Rómulo was always on the edge of the conversation.

“He was shy and whenever I said hello to him, his eyes would dart to the ground.

“I think it was maybe a little awkward for him because he was wary of coming between a developing relationship between me and another person at the camp.

“But on the odd occasion I got Rómulo alone to chat, he came across as really nice and genuine. The feelings I had for him were intuitive rather than obvious.”

Half way through the retreat, Peru announced a national lockdown.

The twelve-strong group – mostly Brits – were given the option of staying on in the jungle or returning to Puerto Maldonado 70 miles away.

Caroline said: “For me, it was a head over heart decision. I wanted to stay but I felt like I was in survival mode and would have more options in Puerto.

“Reluctantly, I decided to find a £10-a-night room in Puerto and wait out the quarantine.

“I was basically staying in a wooden hut with bunk beds, but there were worse places to be stuck for lockdown – there was a view of the river from the terrace and the hostel had a pool.

“Most of the other Brits arranged flights back to the UK but there didn’t seem much point swapping what I had in Peru to be locked down back home, so I decided to stay put.”

As Caroline waited for the Peruvian quarantine to be lifted, she found herself pining for Rómulo.

She said: “He didn’t even have a phone and I had no idea if I’d ever hear from him again."

But ten days into lockdown, a Facebook message popped up from Rómulo.

“He’d borrowed a phone,” she revealed.

“We chatted for ages and then he said ‘I have something to tell you – I think I love you’.

“Even though I’d only known him a matter of days, I felt the same. My head was telling me to hold back, though, and I replied ‘I think I love you, too’.”

For the next month, Caroline would wait anxiously to hear from Rómulo.

The pair managed weekly video or text chats, before Rómulo announced he was coming to Puerto.

Caroline remembers: “It was an amazing, passionate week. We’d spend days by the pool, and evenings going for walks or cooking for each other.

“It was the first time we’d slept together and all I’ll say is we had a lot of fun.”

Rómulo returned to the jungle for three weeks to work on the family farm, a period which Caroline remembers as miserable and lonely.

“Everyone else had gone back to the UK. I was alone and isolated,” she said.

“Rómulo couldn’t even call me.

“When he returned after three weeks away and invited me to go and live with him, his mother, and his six brothers and sisters in the jungle, I leapt at the chance.

“The hostel was starting to feel like a golden cage and I was ready for some adventure.

“We had our own room – basically a little wooden hut. The ‘house’ is really just a yard with a corrugated metal roof and a collection of makeshift cubicles for rooms.

“Some of the hygiene left a lot to be desired but I’m not too much of a princess,so I just got on with it.”

But the plantation had been all but swallowed by the jungle after his death in March 2017.

Cacao nuts are the raw ingredient for making chocolate – and Caroline believed she could find a market for the organic produce back home in the UK.

Caroline explained: “One of the locals offered us a room near the plantation so we set about reviving it.

“It was two hours’ drive away in a jungle village community called Lucerna, home to just 70 people."

She continued: “We spent days hacking back the jungle with machetes. It’s been really hard work – my hands were covered in blisters from all the macheteing.

“But the trees have already rewarded us with fruits and I’ve trashed my fingernails pulling them from the pods. The beans have been processed by hand into raw cacao.

“We’ve had our first orders, mostly through our Instagram account – Jungle Cacao Peru – and through contacts back home.

“I used to run a herbal tea company, and still know lots of foodie business owners – some of them have been quick to see the value in our product.

“Those first orders are packed ready and waiting to send to the UK. I really hope we can make a business out of it.”

In the meantime, Caroline says she is relying on savings and help from her family to get by.

“The cost of living is almost non-existent,” she explained.

“Food is cheap and plentiful. We have everything we need.”

“Luckily I’ve always been able to make money go far and I’ve got a stingy, prudent streak in me which has served me well here!”

For the time being, tourists in Peru are allowed to stay under a special arrangement which means they can remain until 45 days after the government calls an end to the national state of emergency.

Caroline said: “The mosquitoes and sand flies have driven me to distraction, we have to collect our water from a neighbour in 20-litre buckets, and the heat and physical labour are intense.

“But I feel safe and loved with Rómulo. There are 14 years between us, but I don’t give it a second thought.

“19-year-old guys back home are still basically children, but men grow up fast in the Amazon.

“Rómulo can be quiet and reserved at times, but he’s got a playful, affectionate and open-minded side, too.

“We’ve even made time for some naked yoga when we can find a private space.

“Rómulo is eager to explore the world, and I can’t wait to bring him home to the UK to meet my friends and family.”