A mother who spent £250 on a tattoo of her late grandmother has been left heartbroken because it ‘looks more like Rod Stewart’.

Sarah Jackson, 38, from Warrington, Cheshire, wanted a ‘permanent reminder’ of ‘mother figure’ Thelma Jackson, and so she booked to have a giant portrait of her inked on her upper arm at Creative Tattoo Warrington.

The single mum-of-three claims she ‘burst into tears’ after being shown a photo of the ‘awful’ tribute and has since been too embarrassed to wear vest tops that would reveal it.

She took to Facebook last Wednesday with a post showing the original photo of smiling Thelma, which was used on her funeral cards and taken on Sarah’s wedding day.

Next to it is the 22cm-long and 13cm-wide tattoo with Thelma’s grey hair shaded black and with glasses that she claims ‘look like goggles’ that stand out from the ‘manly’ nose and chin. 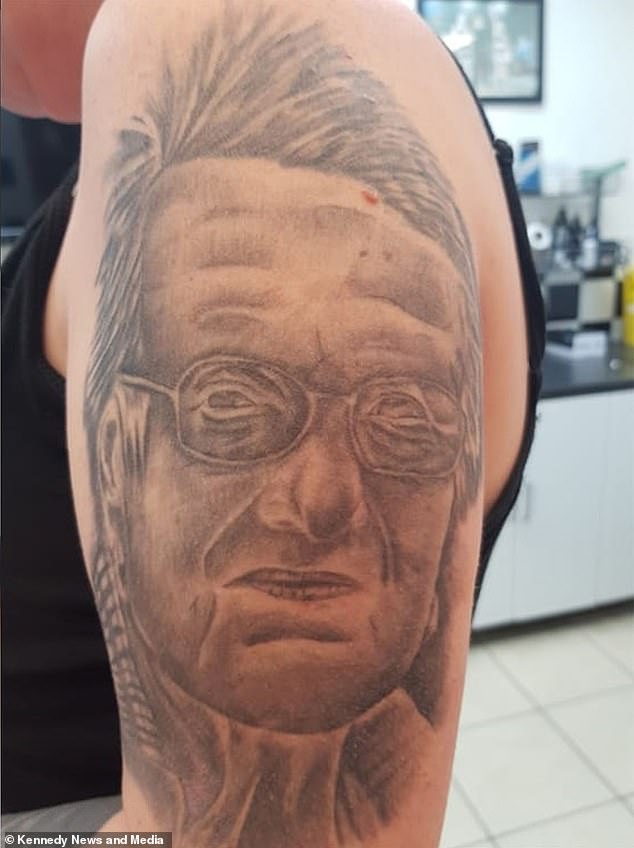 Sarah Jackson, 38, from Warrington, Cheshire, claims she has been left heartbroken after getting a tattoo of her late grandmother (pictured) at Creative Tattoo Warrington 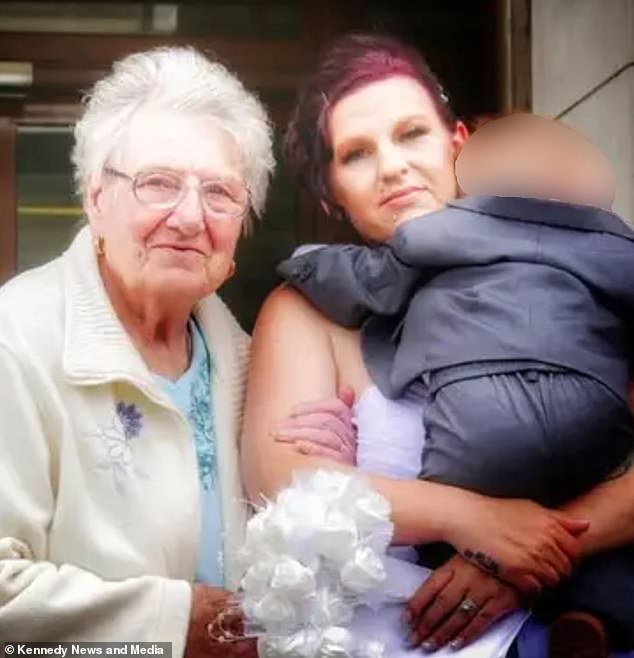 Sarah said she saved for six months to afford her £250 artwork, which was meant to look like a photo taken of Thelma (pictured left) on Sarah’s wedding day

Facebook users mocked the tattoo after Sarah posted a snap captioned: ‘Does not look like my nan gutted’

Social media users were quick to mock the botched artwork Sarah saved for six months to afford as ‘absolutely awful’ and ‘looking like Rod Steward’.

Sarah said her son ‘thought it was a portrait of his grandad’ and that the artist at Creative Tattoo Warrington should ‘stick to stencilling’.

She claims the artist admitted his work was ‘really bad’ and he ‘could have done things differently’ once they’d met to agree a £550 refund and compensation package.

Sarah explained that Thelma, who ‘hated’ tattoos, would have ‘gone mad’ if she was alive, and the experience could leave her ‘scarred for life’ as she faces numerous laser removal treatments.

Sarah said: ‘When people were saying it looks like a man I just sat there crying my eyes out. I saw people say it looks like Rod Stewart.

‘I was looking forward to having that permanent reminder of her, it’s the way I express myself. 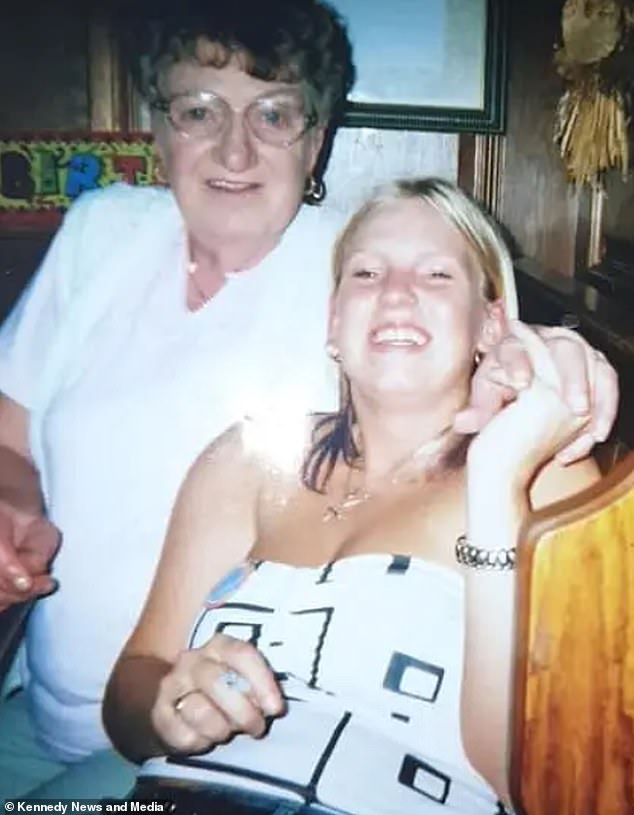 ‘I’m heartbroken all over again. It’s a photo that means a lot to me and it was on her funeral card.

‘Her lips, her chin, her eyes, they all look wrong. She’s not even got an eye on the left-hand side and she had white hair not black hair.

‘When I first saw it my arm was swollen and it’s in a difficult position to see, so it didn’t look so bad at first. I thought the darkness would go down a lot too.

‘When you’re looking down at it, it looks completely different. I only realised about five weeks afterwards how bad it was.

‘When I showed it to a friend she said her tattoo artist said he’d never seen anything so shocking in his life. That’s when I realised and that’s when it made me cry. 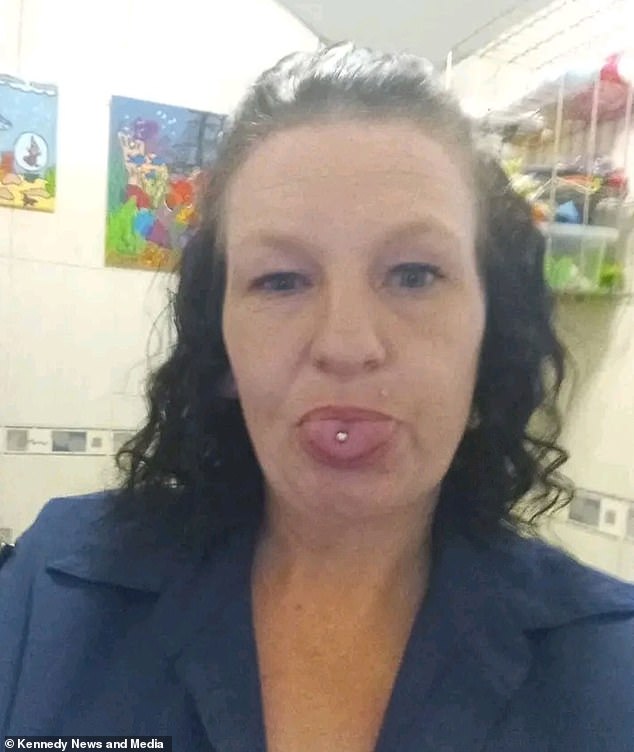 ‘I put the Facebook post on because I wanted other people’s opinions, but I wish I hadn’t really because it just hurt.

‘I’ve been embarrassed to wear sleeveless tops and at work the bottom of my tattoo sticks out. I’ve tried to ignore it more than anything and put it out of my mind.

‘I’m not an artist, but I like to draw and when I lost my nan I drew a picture that looked more like her than that tattoo does.

‘Even my little boy asked if it was his grandad. I’m upset that I’ve been left with this horrible portrait on my arm.

‘I asked my friend’s tattoo artist and asked if there’s any way we can fix it, and he said ‘no way. You can’t fix that’. 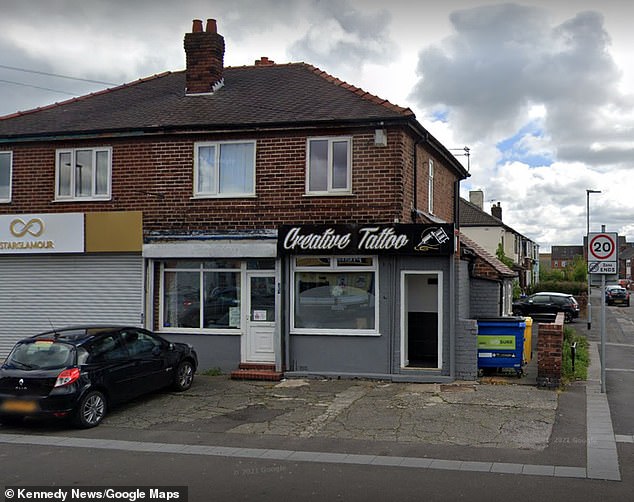 ‘When I went in there I apologised in case I cried because of how much it means to me, but I didn’t even cry at that point. I think that’s a bad reaction to have, I must have known.

‘It’s ironic because my grandma hated tattoos, so she definitely wouldn’t have liked this one. She’d have gone mad.’

Tattoo-loving Sarah wanted the portrait inked by her regular tattooist but he was on a break from the profession when she booked it.

A family recommendation and impressive Facebook photos made her choose Creative Tattoo Warrington where she paid a £160 deposit and £90 on the appointment date on 24th March.

She claims she wasn’t worried when she left the tattoo parlour because the design looked ‘great’, but five weeks later a friend’s tattooist said they’d ‘never seen anything so shocking in their life’. 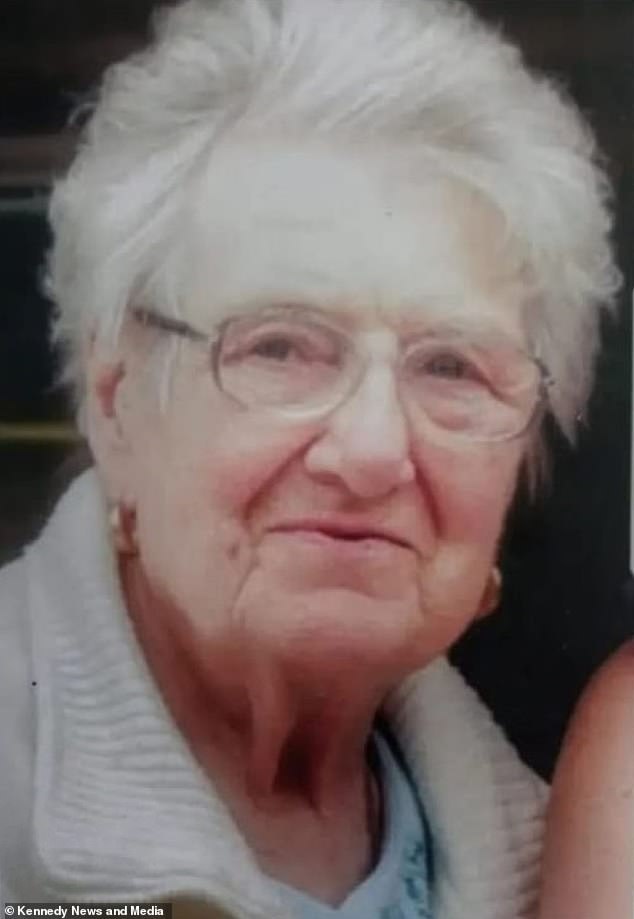 Sarah said Thelma (pictured) was ‘more of a mum to her than a nan’, before her death at age 86 in November 2019

Distraught Sarah has been told she could need around five £70 laser treatments to remove the tattoo, the first of which she had last week, and even then she could still be ‘scarred for life’.

Thelma, who Sarah describes as ‘more of a mum to her than a nan’, died at age 86 in November 2019 of heart failure as a result of complications with a hernia.

The part-time housekeeper planned to make the tribute part of a full sleeve but she’ll now need a specific tattoo to cover the huge portrait.

She declined the tattoo artist’s initial offer of half her money back, so they settled on a full refund and £300 to cover some laser removal treatment.

Despite accepting that offer and saying he’s ‘really nice’, she wants to publicise the incident so others don’t go through the upset she’s endured. 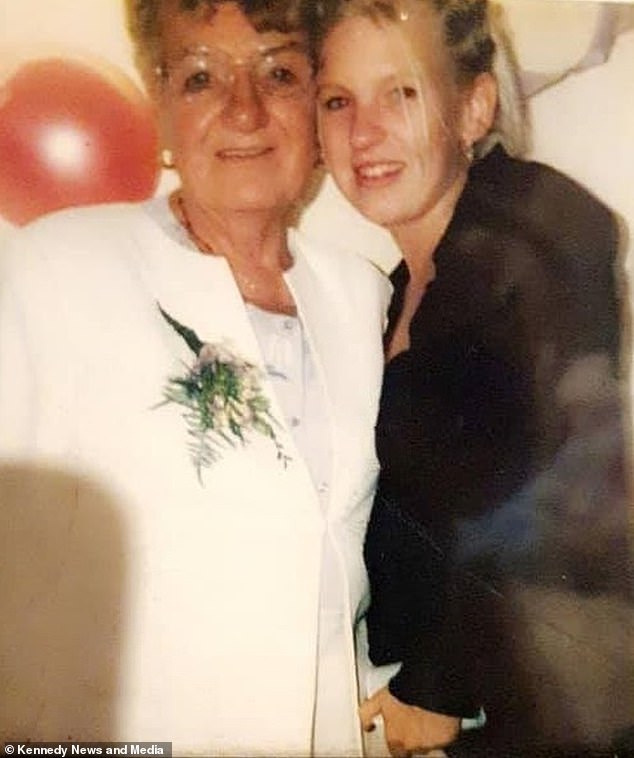 Sarah said: ‘He was nice and I don’t want any animosity. He did tell me he was sorry and he could have done things differently and that it’s really bad.

‘When I told him I didn’t like it, he said to come back in. He said he’d do more shading and he still had things to do. But if he did any more it would be a big black blob.

‘There’s no sorting that out. I don’t think I could go through it again because this has been horrific.

‘Anyone can stencil things with lines. Doing a portrait is completely different. You can’t stencil a face, you need to shade it in the right place to make it look like one.

‘He should stick to stencilling.’ 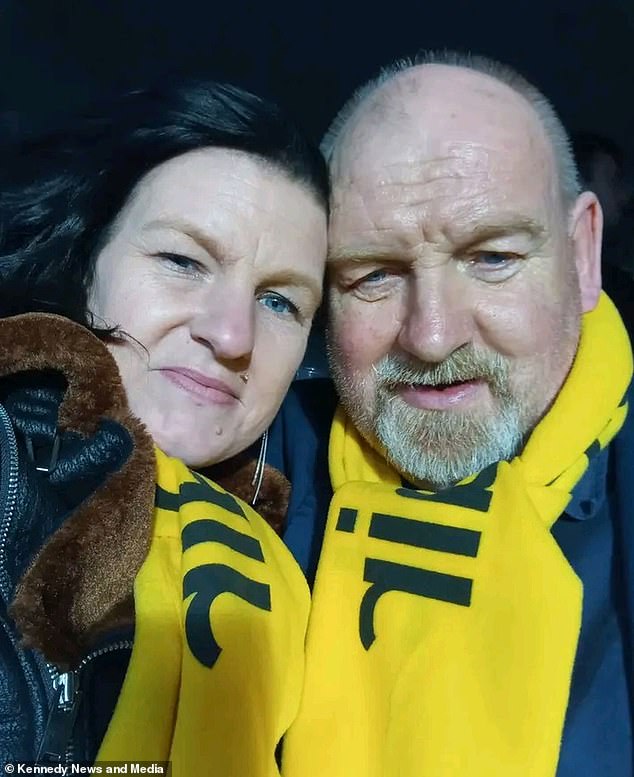 Sarah (pictured, with her dad Norman) said the tattoo artist should stick to stenciling, which is ‘completely different’ to doing a portrait

Sarah’s post simply captioned ‘does not look like my nan, gutted’, attracted more than 100 comments until she deleted it within 48 hours of posting it.

One commented: ‘I thought it was Rod Stewart at first glance.’

Another said: ‘This is absolutely awful. I feel for you so much.’

A third added: ‘Is this legit or what, because that is BAD?’