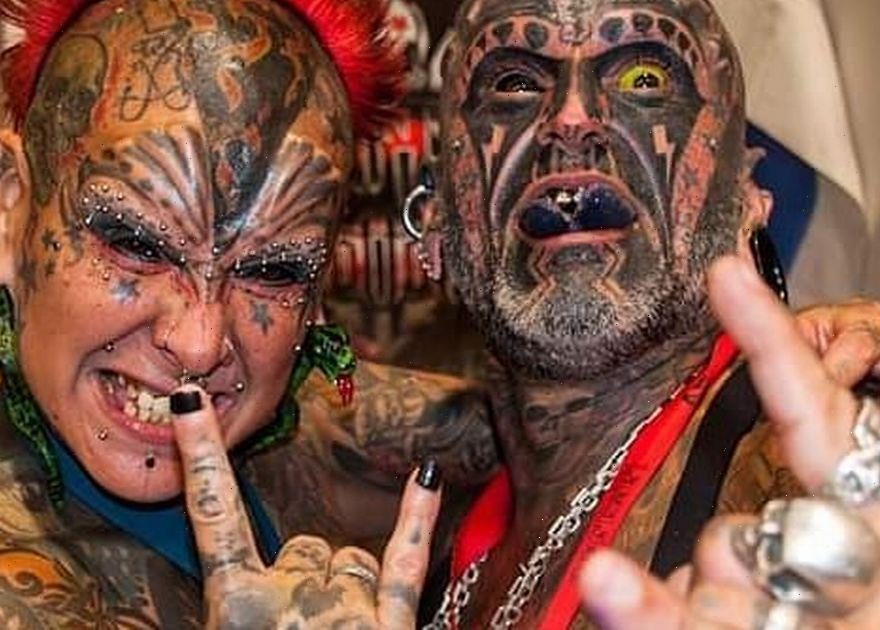 Victor Hugo Peralta and his wife Gabriela from Uraguay have been branded the 'world's most modified couple'.

The body modification fanatics, dubbed the 'cherubs from hell', are covered in tons of tattoos and have around 50 piercings all together.

The couple have worked with more than 80 artists from around the world on completing their unique look.

Most recently, Victor, whose body is almost covered in ink, including his penis, had the number six sliced into his head.

This is part of his next project to have '666' – the devil's number – engraved in his skin.

Talking about his latest piece, Victor said: "The number six is a part of what will be the complete piece 666, this will have to do with the number of the beast.

"The number six only, for me, has no meaning. I do the three six because I hate religious people and what they do doesn't interest me, for that reason I do it out of repudiation of the church…

"Performing one of the sixes took about an hour of work and due to a question of schedules, it could not be completed in a single session."

Victor has been a tattoo artist himself for 26 years, but had been interested in the art form since he was a teenager.

He commented: "From a very young age, I was attracted to colourful art and at the age of 13, I got my first tattoo, which was the word f**k on the fingers of my left hand, and I did it myself.

"Since then, I’ve never stopped tattooing myself, and today at 50 years old I have 95 percent of my body tattooed including my tongue and genitals."

He had his first nose piecing done when he was 22, but didn't stop there.

Over the years, he has had his scrotum pierced, his septum, ears and nipple.

While some people don't understand his passion, Victor said he doesn't let it get to him.

"There are many people who do not agree with this style of life and criticise because they don’t understand the taste of others, those people are generally old and have prejudices or religious beliefs," he said.

"I don’t let it affect me and I don't pay attention to them.

"The tattoos on my face make me unique, I do not want to look like anyone, they are my idea and designed and executed by friends.

"There are many people with tattooed faces and many make their faces like skulls, although those tattoos are beautiful, I am not interested in looking like others."