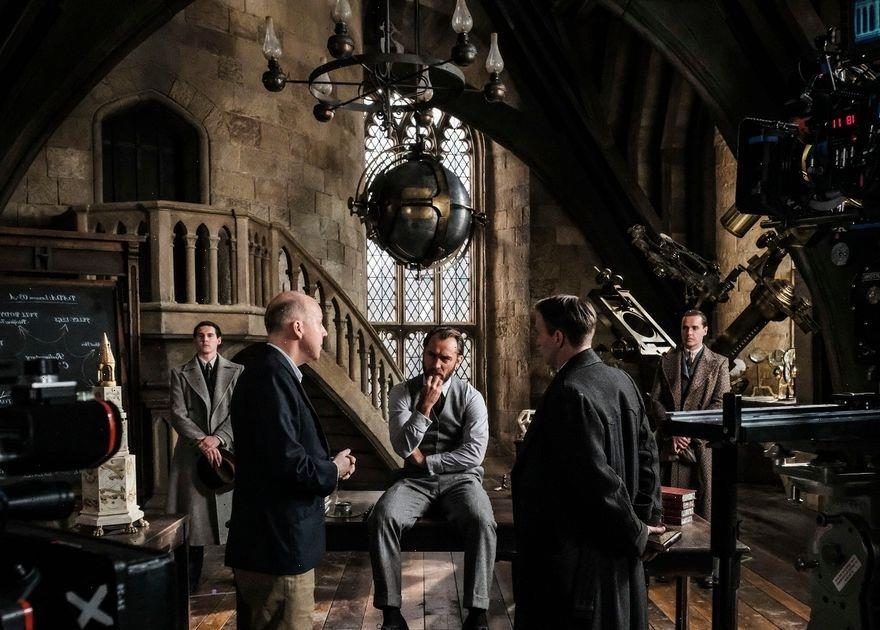 The Fantastic Beasts films have many magical locations – but did you know that lots of UK locations were used to create The Wizarding World?

The UK has some of the most filmed locations in the world, with abbeys, air hangers, film studios and listed buildings becoming the backdrops for both the Harry Potter and Fantastic Beasts series.

Fans can even explore The Wizarding World at the Harry Potter Studio Tour in London, which is also a working studio where many Hollywood blockbusters have been made – including Fantastic Beasts: The Secrets Of Dumbledore.

If you have ever wondered where some of the magical scenes in Fantastic Beasts were made, prepare to learn where you can find them, as Daily Star takes a closer look at some of the locations.

One of the first locations to be introduced in the first film of the series, Fantastic Beasts And Where To Find Them, was Cardington Airship Hangers in Bedfordshire.

The Grade II listed building, which opened in 1917, once housed the world's longest aircraft and was leased to Warner Brothers, who are the film company behind the Fantastic Beasts film series.

Neighbouring Hangar 2 is also home to Cardington Studios, a film and TV production studio, which was also the location for The Batman trilogy starring Christian Bale.

However, the Cardington Airship Hangers were transformed into the Port Of New York Docks, which feature at the beginning of the Fantastic Beasts and Where To Find Them, when Zoologist Newt Scamander arrives in America with his suitcase of magical creatures.

The location also played a role in the film's final scenes, when Newt says goodbye to Tina and offers to send her a copy of his book when it is written.

St Georges Hall in Liverpool has become the backdrop for many Hollywood films in recent years, with the interior acting as the City Hall of New York in Fantastic Beasts And Where To Find Them.

The Grade I listed building opened in 1854 and once held law courts, as well as currently hosting events, weddings and conferences in the city.

It was also recently featured in The Batman, starring Robert Pattinson, and has been the backdrop for TV series including BBC The War Of The Worlds.

The interior was featured in the first Fantastic Beasts film, where Newt Scamander meets Jacob Kowalski for the first time at the bank.

It also hosted a dramatic scene later in the film, when the obscurus, who was later revealed to be Credence Barebone, destroyed an event and killed Senator Shaw in anger after Creedence's family were mocked by him.

At the end of Fantastic Beasts and Where To Find Them, the exterior of St Georges's Hall can also be seen when the wizarding world is erasing the memory of recent events from the people of New York.

The Cunard Building is one of The Three Graces in Liverpool, which is located on the city's famous waterfront and is one of the most famous buildings in the world.

The Grade II listed building is widely associated with transatlantic travel and was the headquarters of the Cunard Line from 1917 to the 1960s.

In Fantastic Beasts and Where To Find Them, the interior of the historic building was transformed into a New York department store for a magical scene where Newt, Tina, Jacob and Queenie try to find one of Newt's creatures that have gone missing.

Leadenhall Market in London already had a connection with the Wizarding World before the Fantastic Beasts films, as it was the location for some Harry Potter scenes too.

In Harry Potter And The Philosopher's Stone, Leadenhall Market was the backdrop in memorable scenes when Harry and Hagrid went to buy his first wand, and also when Harry received his loyal owl, Hedwig.

It was also used as the exterior for the famous pub The Leaky Cauldron in the first Harry Potter film, as well as being the inspiration for Diagon Alley.

The market had links to the magical world once more in Fantastic Beasts: The Crimes Of Grindelwald when it was used as the French market in the film when the action moved to Paris in the story.

In The Crimes Of Grindelwald, Tina can be seen at a table in the famous market, talking to Arnold Guzman about Creedence and where he could possibly be, as her search for him continued.

Leavesden Studios in London is owned by film company Warner Brothers and was where many of the magical scenes from the Harry Potter film series were made.

From Diagon Alley to the Hogwarts classrooms and much more, stepping through its doors is like stepping into the Wizarding World itself.

The studio is now home to the famous Harry Potter Studio Tour, where fans can see sets and costumes from the films too, as well as learn about how they were produced.

A working studio, it is no surprise that it also became the location for many of the interior scenes for the first three Fantastic Beasts films, including the most recent instalment The Secrets of Dumbledore, where the action returned for a period of time to Hogwarts and Hogsmeade.

Along with the Harry Potter and Fantastic Beasts films, it has also been the location for some of the biggest Hollywood hits including Spider-Man: No Way Home, Eurovision: The Story of Fire Saga, Venom: Let There Be Carnage and the highly anticipated 2023 film Wonka, starring Timothee Chalamet.

While the interior of Hogwarts was filmed at Leavesden Studios, many of the exterior shots were filmed on the backdrop of Lacock Abbey in Wiltshire.

The 13th-century building boasts the grand architecture and grounds that fans will recognise from Hogwarts – including the corridors that the students walked to their lessons.

Before featuring in the Harry Potter films, it was also the location for adaptations of Pride and Prejudice and later, Wolf Hall.

When Fantastic Beasts treated fans to a return to Hogwarts in The Crimes Of Grindelwald and The Secrets Of Dumbledore, Lacock Abbey became Hogwarts once more.

In the second film of the series, Lita Lestrange could be seen running through the corridors after she cast a spell on a fellow student, rendering her unable to speak.

The students and Miss McGonagall later chased after Lita in the emotional flashback scene, which showed where her friendship with Newt Scamander began.

Highgate Cemetary in London was another UK location to feature in The Fantastic Beasts film series when it became the backdrop to Pere Lachaise Cemetery in Paris in The Crimes Of Grindelwald.

The cemetery surrounded the characters as they ventured to a meeting being held by Grindelwald and his followers, before an epic showdown where Lita Lestrange revealed that she had killed her brother.

The action then intensified as Queenie joined Grindelwald, with Newt, Theseus, Jacob and Tina fighting for their lives in the cemetery as Grindelwald fled with Creedence – before eventually revealing that Creedence was a Dumbledore in the closing scenes.