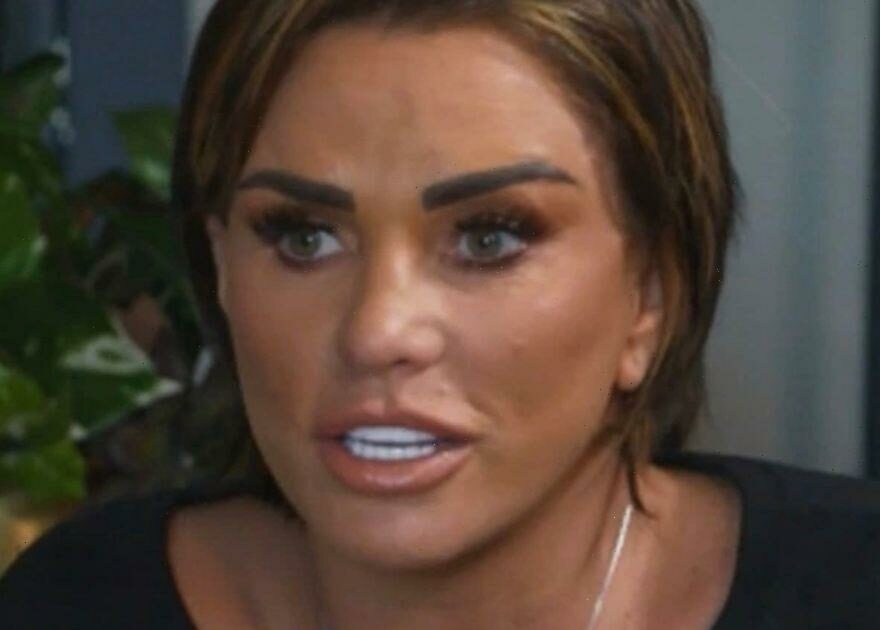 They might be used to the glitz and the glamour, but even the biggest celebrities on earth have been haunted.

It turns out there's a whole host of famous faces with paranormal links, from reality TV stars like Katie Price and Kerry Katona to Hollywood icons like Jennifer Aniston.

And some stars have been left so spooked they've had to move out of their lavish homes in search of somewhere free of malevolent spirits.

To celebrate Halloween, Daily Star have put on a brave face and rounded up the world's most haunted celebs.

Katie Price revealed she took a photo of a ghostly child on the top floor of her new mansion.

Pricey and her fiancée Carl Woods had been upgrading their £1.3million Sussex home.

Katie told The Fella's podcast: "It's definitely haunted. I took a picture of a little boy sitting on my top floor.

"I've got pictures of a guy going through the mirror. I videoed it all. And me talking to a candle flame and it responding. I'm telling you. My whole life is nuts.

"I've had my friends in tears when I've brought up stuff about them that I didn't know by talking to the candle."

She explained how it works, adding: "You'll see me talking to it, telling the flame to go high, low, high, low."

Jennifer Aniston may have had famous on-screen roommates like David Schwimmer and Courtney Cox as Rachel on her hit TV show, Friends, but she didn't expect to come across a ghoulish guest.

She told host James Corden on his Late Late Show that her first LA apartment was haunted by a ghost who she claims hated her roommate.

Jennifer said: "I had just moved from New York City to California, and someone said to me, ‘Oh, you have a spirit in your house. You should have someone [come by] and clear the house. And I was like, ‘Oh man. I’ve landed in Los Angeles.’ We’re talking about ghosts, spirits, and a ghost whisperer?"

They had been hearing strange and unexplained noises in the building, such as the coffee-maker or dishwasher starting up by themselves, and their stereo blaring out unexpectedly.

Although a skeptic, the actor hired a medium to visit the house, who put frankincense into a dish and started saying words to help vanquish the spirit., but the dish quickly cracked when the medium walked to the edge of the room.

She said the alleged spirit “hated" her roommate, and that she moved out quickly after the spooky experience.

He told Instagram Live: "We have got a very, very old property. It is like a thousand years old. There is one room that I am suspicious of. It gives me the creeps. Teddy, our daughter, was sleeping in there. She doesn't any more.

The singer said he ran into the ghost of his dog, adding: "I do believe energies can be left in houses. I did see the ghost of a dog once. It was Trixie, our cairn terrier who passed away. My sister came home and I looked down and there was Trixie jumping up at her legs.

"And then I looked back and Trixie was gone. Who knows what that was. Was that a ghost or my mind playing tricks on me? What was that? Was that my mind replaying something I had seen 300 times?”

Supermodel Kendall Jenner revealed to Vogue in 2018 that she and her younger sister, Kylie Jenner, had a number of creepy experiences inside their mum's house.

She convinced the mansion is full of ghosts following a series of unexplained events in the house – including unexplained footsteps and the shower turning itself on – following her using an Ouija board.

Kendall told Vogue: "I do believe in ghosts. I don’t know if I’ve ever seen one, but I’ve experienced some pretty ghastly situations.

"In the house my mom lives in, Kylie and I would always hear footsteps on the roof while no one was home. Kylie's shower used to turn on all the time and we never knew why. So yeah, I'm convinced it was a ghost."

Atomic Kitten star Kerry Katona has also reported a spiritual run-in of her own, claiming her mum Sue's house is haunted after her table lamp kept flickering on and off.

After catching what she saw as video evidence, she believes it isn’t the first time something haunting like this has happened to her.

After posting a video of her daughter DJ dancing, Katona said that there were “so many orbs” in the footage.

Kerry, 40, told fans: “Just so you guys have a bit of a idea…just to be clear this has been going on for years with me. I know this scares a lot of people but it always makes me smile.”

Matthew McConaughey said he had to "stand his ground" when his Hollywood home was haunted by a spirit called Madame Bleu.

The Interstellar actor recalled the supernatural story in 2009, saying: "I was not even under the influence, and she was there," he recalled. "She wasn't that happy, it didn't seem like she was going to be much fun to hang around or have in my house, so I went ahead and stood my ground.

"I opened the door and said, 'You can move around all you want, but I'm not going anywhere.' For weeks everyone that came to the house said the same thing: 'There's someone down in that hall, there's somebody down in that hall.'"

Apparently the ghost stopped visiting him and his future guests loved the room.

Oscar-winner Adele was also refusing to sleep in her mansion alone as she believes it's haunted, after "hearing things that made her jump".

According to The Sun, she told her friend: “ I’m not rattling around here on my own. It gives me the creeps.”

The friend commented: "Adele was so excited to be renting such a lavish property but it has not turned out as happily as it should have.

“She is convinced it is haunted. She knows about its religious history — and it’s a big place to be in on your own in the dead of night.”

Pop star Miley Cyrus claims her London apartment across from Harrods was so haunted she had to move out.

She told Elle Magazine: "I used to have an apartment in London, right across the street from Harrods, it was really haunted and I had to move. That’s not a lie.

"It was seriously so terrifying. It used to be an old bakery and they turned it into an apartment building, and I was having really crazy dreams and really scary things, and one night my little sister was standing in the shower and all of a sudden I hear her scream.

"I run in there and the water had somehow flipped to hot but it was still… It wasn’t like the water had just changed, the knob had turned but she hadn’t turned it and it was burning her. She was really red."