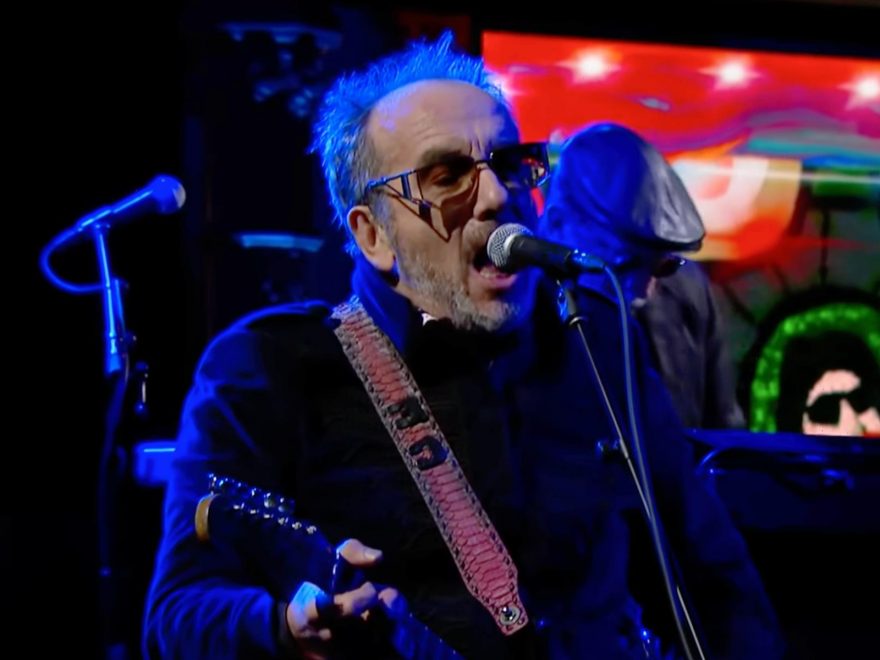 Elvis Costello and the Imposters took to the stage on Friday’s episode of The Late Show with Stephen Colbert to give a rousing performance of “Farewell, OK,” the lead track from the group’s latest album, The Boy Named If.

The song tells the story of a relationship gone off the rails, with one party wondering how things might have gone differently. “Ran my hand in the rhythm along the ballroom wall,” Costello sings. “Felt the rumble of the bass through the entrance hall/ And the door flung open to a mascara cry/ I can’t shake the sound of ‘How could you or why?’”

“Like a lot of good rock and roll songs this began with a drummer down in a basement and a singer howling outside the backdoor,” Costello said in a statement about the track. “It’s a blurred gaze, a drink too much, an accidental punch and a kiss goodnight all in the tumult of a dancehall.”

The My Aim is True rocker also surprised the audience with a rendition of his classic hit, “(What’s So Funny ‘Bout) Peace, Love, and Understanding.” The song, which appeared on Costello’s 1979 LP Armed Forces, was originally written by English singer-songwriter Nick Lowe.

The Boy Named If dropped earlier this month. In an interview about the album for Rolling Stone’s Last Word column, Costello shared what still attracts him to writing rock music after nearly five decades in the business.

Costello is set to hit the road this summer in support of The Boy Named If with a short UK tour. Most information about the shows can be found on Costello’s website.