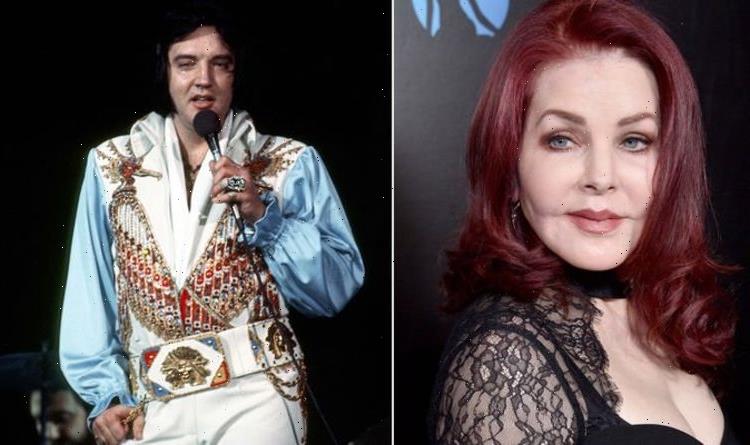 Priscilla was speaking recently to help promote the auction of one of her ex-husband’s iconic outfits, the white “eyelet” jumpsuit he wore for the famous 1972 Madison Square gardens concerts. The distinctive one-piece and matching cape had a stencilled cut-out pattern with the holes bordered in gold. The King’s former wife took the chance to remember some of their special moments together and also one of her greatest fears.

Priscilla admitted that when she moved over to the US just after aged 17 she was constantly worried about their relationship. They had met during Elvis’ military service in Germany when she was only 14, but she says the connection on both sides was powerful and instant.

Priscilla says: “I had to keep him. I wanted to go places with him. I would cry if I couldn’t be around him.”

But Elvis returned to the US, leaving the besotted teen behind. After two more years of secret phone calls, letters and visits – behind the back of The King’s then-girlfriend Anita Wood – Priscilla’s parents let her move to Memphis. The couple were under strict conditions, which they immediately broke.

Priscilla’s parents only allowed her to move overseas on the understanding she would live in a separate house. But she soon spent every day and night at Graceland.

She says now it wasn’t just her passionate love for Elvis behind this constant closeness: “Women gravitated to him, so I would be nervous when he had to go places alone. I would even go with him to get his teeth cleaned. I always had an eye on him because everyone in the world was after him.”

They also developed their own private language – which may have originated with his mother but developed into something very different.

Elvis’ obsession with talking in a baby voice using nonsense words is well-documented.

The star was extremely close to his mother from birth all the way to her sudden death in 1958, just before he left for Germany.

Ever since Elvis’ twin brother Aaron died at birth, Gladys was extraordinarily overprotective and somewhat infantilised her surviving son, who often shared her bed until his early teens.

They spoke in their own baby language and Elvis carried this into his adult life and many of his relationships.

And it was natural it would start with Priscilla, now that Gladys was no longer around and the star needed looking after.

Priscilla says: “I was always ready to greet him at the door and pamper him,” says Priscilla. “I loved taking care of Elvis very much. I loved tending to him. I loved feeding him… It was different, but it was ours.”

Taking over Gladys’ role also included the baby talk. There was certainly an innocent, childlike element to it which helped Elvis feel safe and far from the increasing pressures of fame and who he had to be in his adult, professional life.

But Priscilla says it also served another important function: “We would baby talk, because you have to have your own language when you have that many people around.”

Although the relationship and subsequent 1967 marriage was over by 1972, Priscilla now looks back on it with older, wiser eyes: “I truly cherish the great times. As you grow up, there are always fears and insecurities, but as you get older you understand it all.”

Elvis’ final long-term partner Linda Thompson has also spoken about how they communicated in baby language which was even more involved and detailed. The star perhaps needing it more than ever as his life spiralled out of control.

She said: “Elvis and I spoke to each other in our own unique language…inane baby talk.”

Iddytream was ice cream, milk was butch and sooties were feet. Ariadne was only of Elvis’ pet names for Linda.