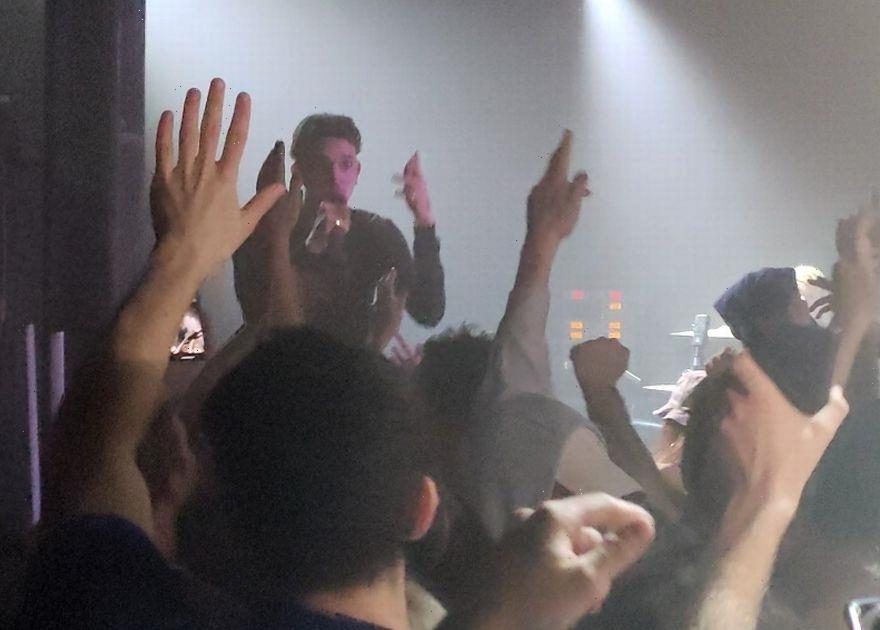 “EYK, EYK” were the demands of fans at every teasing gap in between songs ahead of their stage time.

First though was Finn Foxell who did more than his job as a support act to rev up the crowd at Shoreditch’s XOYO, on December 5.

The rapper grew into his set and the response to such growth was felt with floor vibrations and bodies shuffling into one another. Finn’s initial tracks were confusingly backed by a studio recording which admittedly threw me off hearing one voice deeper than the other.

But it soon became apparent why Everyone You Know picked the west Londoner to open up for them on their final UK with them over the past tour date.

The face-pulling bars of EOTM were followed by the more catchy melodies heard in The Night.

When Finn introduced his tribute to his old Ericsson, the general age of the 800 person capacity venue was revealed a tad when few could share in the nostalgia of the pre-iPhone era.

Finn Foxell is on the road as a headliner himself from May, starting in Glasgow.

The main event on Sunday night was an added date due to Everyone You Know’s planned final show selling out in a flash.

Drummer Paige Proctor joined brothers Rhys and Harvey on stage from Newcastle on November 16, to their back to back London gigs and everywhere in between.

Thanks in no small part to EYK’s recent BBC Radio One playlist spots, with singles from their breakthrough Just For The Times EP, each night on the tour was a sell out.

It is little wonder either as singer Rhys’ relatable lyrics tap into the realities of every day life for outgoing Brits in their early 20s.

Throw into that Harvey’s sincere production and you have an alternative pop double act, fully equipped to uplift a generation it celebrates and critiques in equal measure.

Higher is the first track on the EP and so was naturally the first of the set come 9pm and given it is the pair’s most rock and roll song, of course it made sense.

Slower songs in the project released this autumn made way for older favourites to maintain the set’s tempo. In came Our Generation and Dance Like We Used To from their Cheer Up Charlie EP and 2019’s She Don’t Dance.

Keeping energy high did come at the cost of the emotion behind lockdown anthem Just For The Times, but without collaborator Joy Anonymous it was a decision that made sense.

Rhys proved to be as brilliant a front man as he is a recording artist, shrinking the stage with his assured presence.

For more incredible stories from the Daily Star, make sure you sign up to one of our newsletters here

For all his movement faintly visible through smoke which lingered over heads in the front row, Rhys chose his moments to embrace his words being sung by hundreds before him.

Cries for one more song were responded to with several.

The Drive was one of a couple of songs to get the replay treatment and close the show with EYK’s closest friends and family jumping alongside them on stage.

It was touching to see as their sense of achievement as the tour ended but make no mistake, this is only the beginning for EYK.