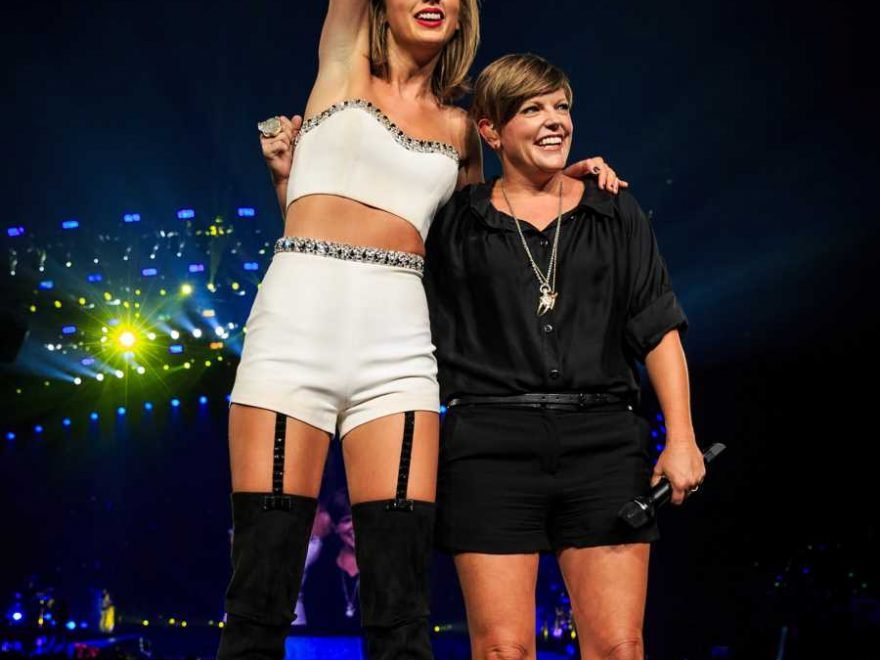 Taylor Swift’s track list for her seventh album Lover, which she revealed Aug. 16, confirmed a rumored collaboration with country group the Dixie Chicks on unreleased song “Soon You’ll Get Better.” Who else has Swift worked with over the years?

Swift took Sheryl Crow‘s place on a live cut of this duet with country musician Ingram, initially released on music service Rhapsody (now Napster) in 2007. Ingram, 48, re-released the song last year on From the Vault: Live 2007-2009.

Swift’s 2008 duet with singer-songwriter Caillat came after she heard her debut album, Coco, featuring the hit “Bubbly.” “When it came out, I fell in love with the way that she makes music,” Swift wrote in a track-by-track explainer for Big Machine Records.

They cowrote the Fearless track when Caillat was performing in Nashville. “I think she sounds beautiful on it,” Swift added. “I’m so excited to have her voice on my album.”

Pop-rock band Boys Like Girls approached Swift to join their ballad off 2009’s Love Drunk after Swift made a comment in the Wall Street Journal about liking the band. Drummer John Keefe had also played on Fearless.

“She’s really such a nice girl,” singer Martin Johnson told Seventeen. “It was like shooting for the stars asking her to sing on the record. We were so delighted and fortunate enough to have her on the record.”

Swift also wrote “You’ll Always Find Your Way Back Home” for Hannah Montana: The Movie with Johnson in 2009.

John Mayer, “Half of My Heart”

Singer-songwriter Mayer, 41, got Swift to sing backup on his 2009 single “Half of My Heart” before the pair’s rumored romance later in the year. The couple ended things in early 2010, and Swift’s Speak Now cut “Dear John,” from the same year, is allegedly about their relationship.

One of Swift’s two contributions to the 2012 soundtrack for The Hunger Games, “Safe & Sound” is a collaboration with folk duo The Civil Wars (singer Joy Williams pictured). She wrote the song with her fellow Nashville musicians in just two hours.

“The Civil Wars had a show that night in L.A.,” Swift explained to Rolling Stone. “So they raced right over to [producer] T Bone [Burnett]’s house.”

Brazilian pop star Fernandes joined Swift on a version of “Long Live” for the Brazilian version of 2011’s Speak Now World Tour — Live. The Swift fan, 34, sings her lines on the song in Portuguese.

Swift approached B.o.B. with the idea for the anti-bullying anthem, on the rapper’s 2012 album Strange Clouds.

Ed Sheeran, “Everything Has Changed” and “End Game”

The only artist featured on two songs with Swift, Sheeran is a longtime friend of Swift. They met after she scribbled some of Sheeran’s song lyrics on her arm at a show, and wrote the duet “Everything Has Changed” in Swift’s backyard.

“She’s probably the only woman in her position in the industry who writes 100 percent of her hits,” Sheeran, 28, told Billboard in 2013. “She definitely knows what she’s doing.”

Swift had Sheeran open her North American tour for Red in 2013, his biggest tour at the time. They linked up again in 2017 for Reputation‘s “End Game.”

Swift’s collaboration with the Snow Patrol frontman happened thanks to Sheeran, who had opened for the band and written with Lightbody. He invited Lightbody to the studio during Swift’s Red sessions to meet the musician, a big fan of his band, and they ended up writing duet “The Last Time.”

“I can’t remember if I was bold enough to ask if she wanted to work with me,” Lightbody told Under the Radar. “But it might well have been me.”

Nearly seven years after she started her career with a song called “Tim McGraw,” Swift dueted with the country icon, 52, on his 2013 single “Highway Don’t Care.” Country performer Keith Urban also plays guitar on the song.

Swift brought out McGraw and his wife, Faith Hill, to perform the song in Nashville on her 2018 Reputation stadium tour (pictured).

“It was me just vibing and catching her lyrics,” Lamar, 32 told Howard Stern in 2017 of the collaboration. “The vibe was right and it didn’t take too many takes, and we was really locked in on the chemistry, and we really felt what was going on.”

Fifty Shades Darker brought Swift and the former One Direction star, 26, together, and they released their duet for the soundtrack in 2016. They worked together thanks to Swift’s friendship with Malik’s then-girlfriend Gigi Hadid, he told Elvis Duran.

The prolific rapper, 35, joined Swift and Sheeran on the Reputation single “End Game” in 2017, and partied with Swift for the music video.

Swift worked with Sugarland on the single from the duo’s 2018 album Bigger, the first feature on one of their records. She first wrote the breakup anthem for her 2012 album Red with Train frontman Pat Monahan, but it didn’t make the final cut.

“She’s a fantastic songwriter. One of the best,” Sugarland’s Jennifer Nettles, 44, told Entertainment Tonight of Swift in 2018.

The collaboration between Swift and the Panic! at the Disco frontman came about after she sent a heartfelt text that brought longtime fan Urie, 32, to tears.

“She sent me the song and I just gushed over her, basically reciprocating the love saying I am such a massive fan of yours, and I can’t wait to work with you on this song,” he told Billboard of the lead single for Swift’s upcoming album Lover. “I haven’t had the song out of my head since I heard it first.”

Eagle-eyed Swift fans noticed a photo of Dixie Chicks in the background of the “ME!” music video, and the country trio only amplified rumors of a collaboration by tweeting an eyes emoji and tagging Swift after the video premiered. “Chicks stans never unstan,” Swift cryptically replied.

The recently unveiled tracklist for Lover confirmed a Chicks collab, the 12th track titled “Soon You’ll Get Better.” Swift previously brought out Dixie Chicks member Natalie Maines, 44, to duet on their hit “Goodbye Earl” at her 2015 1989 tour stop in Los Angeles. “If it were not for this artist, I would not be a musician,” Swift said at the show.