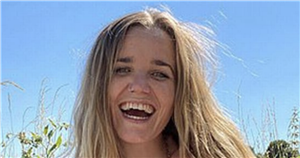 Jeremy Clarkson's daughter Emily Clarkson was left devastated after discovering that her front tooth had died.

The 27-year-old writer took to social media to update her followers on the news, and she wasn't best pleased.

In her post, Emily explained that she'd had a terrible run of bad luck when it came to operations this year and she was therefore down in the dumps about another health procedure.

"It's a broken jaw and two slipped discs and a burst sinus wall not enough for one year, for one person!

"Before this year, I'd never even had a filling and now I'm like, yeah, I'll take one of everything please."

In another post, Emily explained that she'd had a full on "breakdown" after uncovering it was one of her front teeth that had been the problem.

On camera, Jeremy's daughter said: "The size of the breakdown I just had, it's my front tooth.

"My front tooth has died."

Emily went on: "I am harbouring a corpse and to fix it they need to do f***ing taxidermy so that I can continue to live with my dead tooth in the middle of my face.

"I wish I had stayed at home."

Back in February, the author opened up about having her mouth wired shut after having her jaw broken and suffering painful slipped discs.

The daughter of the Who Wants To Be A Millionaire host and his ex-wife Frances Cain took to Instagram to provide insight into the recovery process. "The splint didn't work so I have still got two slipped discs in my jaw which is painful and limiting. I can't open my mouth wide (this is the capacity which is like half of what it was before)," explained the journalist.

She added: "I also still have discomfort and scar tissue where the sinus wall exploded but I am learning to live with that because the solution is more surgery and no thanks.

"We ain't done yet because I am going to have to do something about the slipped discs but I can't face it right now so I'm sort of pretending it isn't happening which is not good."

The author concluded: "But I can eat in public again lol so that's good!"