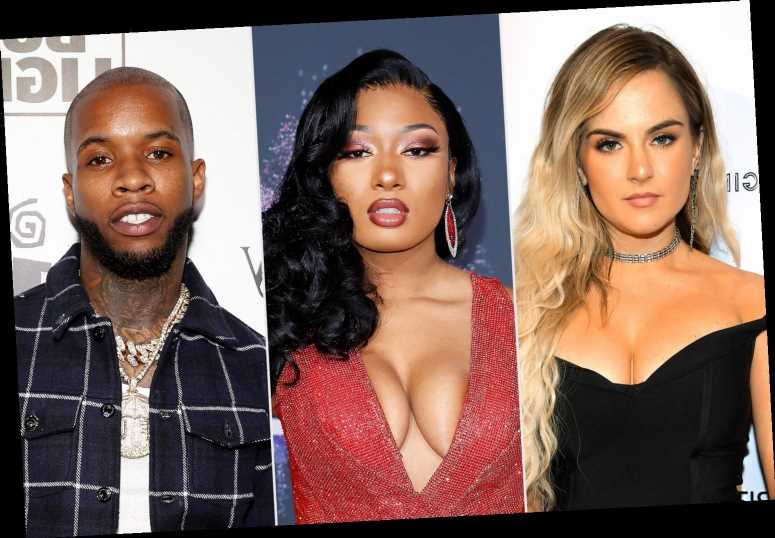 JoJo says Tory Lanez will no longer appear on her upcoming project after Megan Thee Stallion claimed the rapper is the one who shot her.

On Thursday, Megan, 25, spoke to her followers via Instagram Live, dispelling internet rumors that she was lying about the incident which left her wounded, and saying that Lanez, 28, was the one who opened fire on her last month.

A rep for Lanez did not immediately respond to PEOPLE's request for comment.

"You shot me, and you got your publicist and your people going to these blogs lying and s—. Stop lying," she said on the live-stream. "Why lie? I don't understand. I tried to keep the situation off the internet, but you're dragging it."

Lanez, whose real name is Daystar Peterson, was arrested on July 13 and charged with carrying a concealed firearm in a vehicle. He posted his $35,000 bail and was released later that day, and is scheduled to appear in court in October. The Los Angeles District Attorney's office announced earlier this week that they are reviewing a potential charge of felony assault with a firearm in the case, the Los Angeles Times reported.

After the "WAP" rapper said that Lanez was the one who shot her, a fan tweeted at JoJo, 29, asking if Lanez will still appear on the forthcoming deluxe version of her album, good to know, out next Friday.

"Def took him TF off," wrote JoJo, who has a collaboration with Lanez and 30 Roc titled "Comeback" on the standard version of the album, which debuted back in May. The updated deluxe album will also feature a collab with Demi Lovato.

JoJo then tweeted support to Megan, writing: "LOVE RESPECT AND PEACE AND PROTECTION TO @theestallion ❤️❤️❤️❤️❤️❤️."

Two days after Lanez's arrest in July, Megan spoke out about the incident on Instagram, saying that she "suffered gunshot wounds, as a result of a crime that was committed against me and done with the intention to physically harm me."

"I was never arrested, the police officers drove me to the hospital where I underwent surgery to remove the bullets," she said, adding that she is "incredibly thankful to be alive" and "expected to make a full recovery."

"I'm currently focused on my recovery, so I can return back to my life and back to making music as soon as possible," Megan explained. The rapper also called the shooting "the worst experience of my life."

On Wednesday, the "Savage" artist shared two since-deleted photos on Instagram of her gunshot wounds.

"Lol what I have learned abt majority of the people on social media is y'all like to hear bad news before good news, a lie spreads quicker than the truth, and y'all really be believing the s— YALL make up," she wrote in a caption accompanying a photo of a bloody wound on her foot and of a doctor tending to her injury in a hospital bed.

JoJo's good to know deluxe version will be available wherever you stream music on Friday, Aug. 28