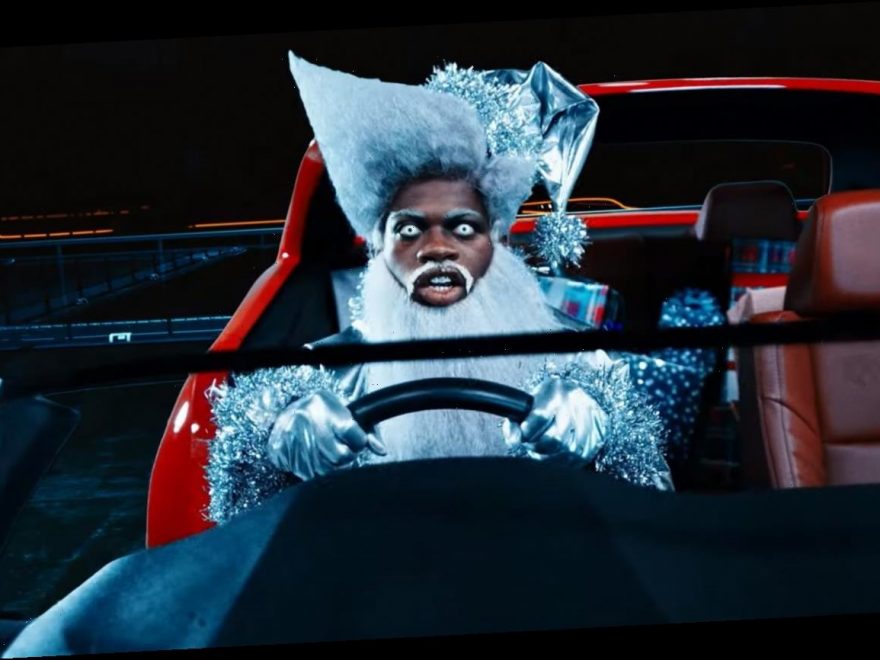 Following up the ‘Back to the Future’-themed teaser, the official full video for the rapper’s Christmas song sees him as an unorthodox Santa Claus dressing in silver.

AceShowbiz –Lil Nas X is back to spread the Christmas spirits early. Just in time for the Yuletide season, the Grammy Award-winning rapper debuted his new song aptly titled “Holiday” along with its official music video on midnight Friday, November 13.

Picking up where the “Holiday” teaser left off after the “Old Town Road” hitmaker ditched his cowboy ensemble for a Santa Claus costume, he does take the baton as Father Christmas with a twist. Instead of donning the classic red outfit, he’s clad in silver as he appears to portray Santa from the future, playing along with the “Back to the Future” homage in the teaser.

Lil Nas also portrays three other characters within a gigantic, sci-fi Santa’s Workshop at the North Pole. One of them sees him in a black robotic costume as he seemingly depicts a character from a video game. He then trades the all-black ensemble for a striped outfit which has spikes on it and matches his hairstyle, while riding a red car.

The fourth character is dressed in silver with a sleeveless top and a short skirt, while sporting long silver braids. He’s dancing with some robots in the background during the chorus which goes, “Ayy, it’s a holiday/ I got h**s on h**s and they outta control, yeah/ Ayy, it’s another way/ All my n***as on go and I hope that you know it.”

The video ends as Lil Nas’ Santa takes a ride across the United States in a high-tech sleigh, a Christmas-red Dodge Challenger, pulled by robotic reindeer, which flies past his own versions of Mount Rushmore, the Hollywood sign, the Golden Gate Bridge, the Statue of Liberty and Times Square.

“Holiday” is produced by Tay Keith and Take A Daytrip. It marks Lil Nas’ first new single in almost two years after he released “Rodeo” featuring Cardi B and Nas, which peaked at No. 22 on the U.S. Billboard Hot 100. He is expected to perform the new song at a virtual concert this Saturday, November 14th, on the children’s video game Roblox.