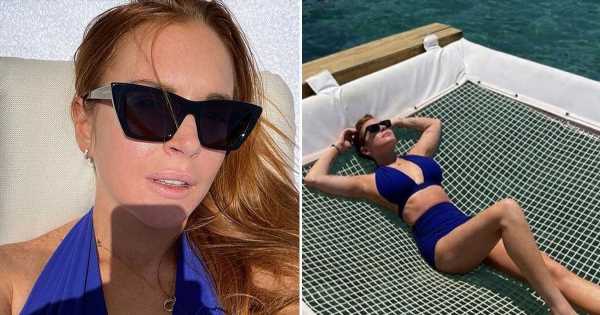 Lindsay Lohan has shared a slew of snaps from her sun-soaked honeymoon after seemingly marrying Bader Shammas in secret earlier this month.

The 36-year-old actress has been told that she looks "happier than ever" as fans shower her in compliments.

In a recent set of photos she uploaded to Instagram, the Freaky Friday actress looked incredible wearing an electric blue bikini.

One snap saw the star grin with pure joy while wearing a floaty beach cover up, and the next showed off the picturesque view from her sun lounger.

Two other photos were of Lindsay showing off her slender figure while she sunbathed at resort The Bodrum Edition – which overlooks the Turkish Riviera.

Wearing a blue two piece, the Hollywood actress glowed beneath the sunshine.

"That’s one of the best photos I’ve seen of you," penned one fan in the comments.

Another added: "My favourite Lindsay is a happy Lindsay! #Legend."

A third then declared: "Happiness looks good on you."

She announced the news to her 10 million followers on Instagram, which coincided with her 36th birthday.

Sharing a snap of the happy couple, Lindsay flashed her engagement and wedding rings while smiling for the camera.

In the caption she penned: "I am the luckiest woman in the world.

"You found me and knew that I wanted to find happiness and grace, all at the same time. I am stunned that you are my husband. My life and everything.

No details about the wedding have been made public, but it seems as though the newlyweds are now enjoying a lavish honeymoon together.

Lindsay announced her engagement to Bader back in November 2021.