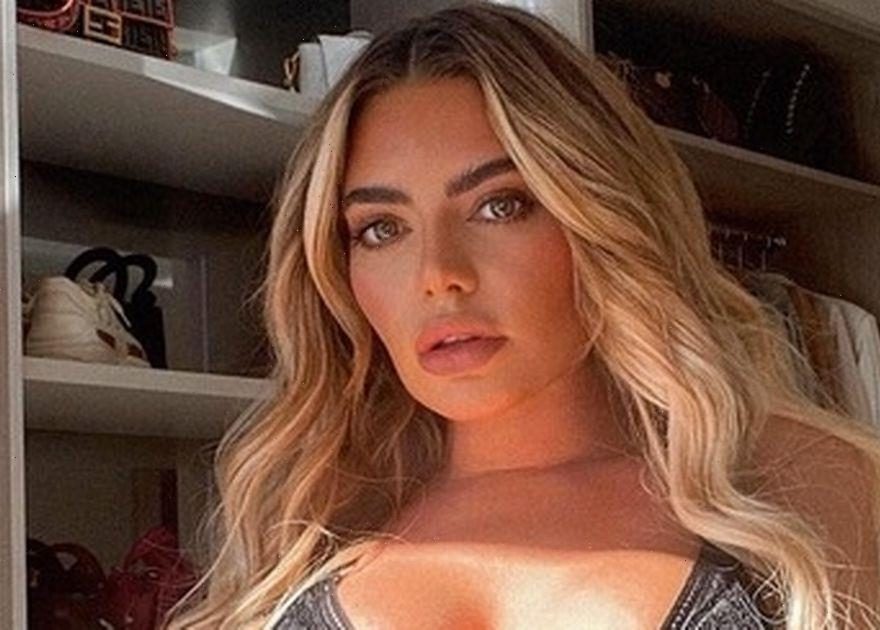 Megan Barton Hanson had temperatures hotting up as she posed in a dark grey lingerie set.

The Love Islander's boobs were spilling out of the lacy balcony bra as she posed in her walk-in wardrobe.

Paired with some hip-hugging panties, Megan, 28, smouldered for the camera with her tanned tummy on proud display.

Her blonde hair tumbled in tousled curls past her shoulders and came to tickle her waist.

A glimpse of the blonde beauty’s toned thighs was just on display as she sizzled for the racy shoot.

She rocked a nude makeup look, with pale lipstick and just a touch of bronzer, as she oozed sex appeal in front of the lens.

Megan, modelling for SHEIN, captioned the seductive snap she posted to her Instagram account: "Golden hour in the cutest @luvletteofficial."

Fans were quick to flood the comments section with adoration, with one writing: "My babe."

Someone else posted: "Wow so sexy."

Since the snap was posted 18 hours ago, it has already garnered more than 38,000 likes from some of Megan’s 1.6million followers.

Megan also shared a hilarious set of clips to her Insta Story, as she and her mum took her Fiat 500 to the car wash for the first time.

Her mum explained she should leave the car in neutral while going through the conveyor belt car wash.

They shared a giggle over her mum’s pronunciation of "chassis", with Megan laughing: "It sounds like a kebab!"

"What’s happening? Mum I don’t like this!" Megan cried as the car began to move.

"This is the most excitement I’ve had all lockdown!" she whooped.

Megan has been notorious for cheering up fans with her sunny snaps throughout the pandemic, and earlier this month posted a sun-drenched pic of her in a barely-there orange bra.

Megan’s abs stood out as she soaked up the sunset, with her eyes closed and face turned to the sky.

Her bellybutton piercing glinted silver in the light, which cast her boobs in a golden glow.

The blonde goddess even attracted a comment from Little Mix’s Jesy Nelson, who said: "You are something else."

And Khloe Kardashian responded with a row of heart-eyed emojis.

She was all for dishing out stripping advice to eager fans last week, as she answered in a candid social media Q&A: "Don’t get drunk drunk, take fake shots if they insist. Have fun but you’re there to work.

"Set yourself a target to earn each night and make it happen."

She continued: "Also it’s only partly about the dance, be their best mate and actually get to know them a little before taking all their money."

Though Megan shot to fame after appearing on series four of Love Island, she first made a living as an exotic dancer at the Sunset strip in Soho.