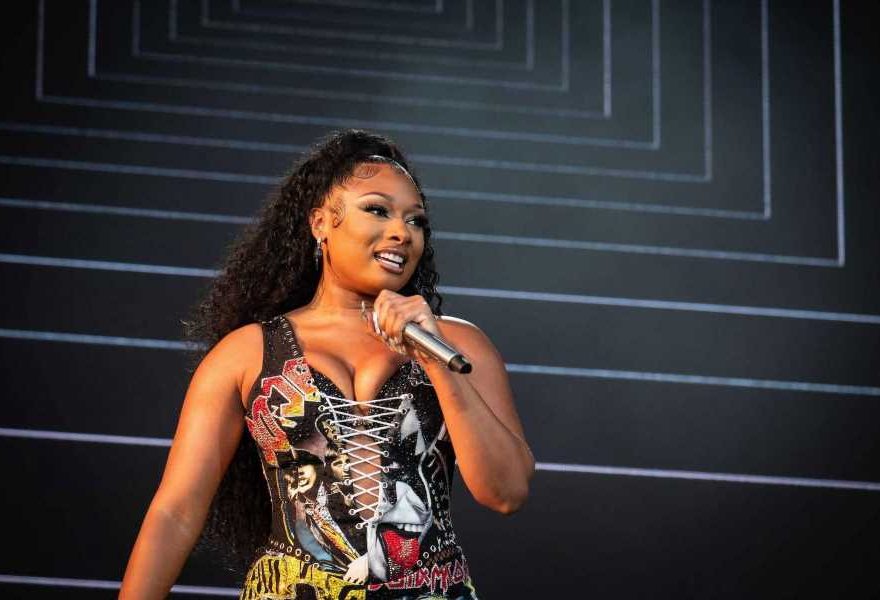 Hot girl summer has been a long time coming.

Back in August 2019, when Megan Thee Stallion released her collaborative single of the same name with Nicki Minaj and Ty Dolla $ign, the term had just started to go viral online thanks to a line in her Fever cut “Cash Shit.” A love letter from the Houston, Texas, rapper to her devotees, “Hot Girl Summer” embraces the very self-confidence and pride that women, especially black women, are often shamed for possessing when growing up. It exalts listeners who need it most. The only problem, of course, was that summer was already winding down by the time the single took over the radio. The following year wasn’t any better, as a global pandemic put everything, including the in-person concert experience Megan Thee Stallion and her fans had been craving, on pause.

Journey Reintroduce Themselves to a New Generation at Lollapalooza 2021

Lollapalooza and last weekend’s Rolling Loud Miami are the first major music festivals at which Megan Thee Stallion celebrated her worldwide takeover during a body-positive summer. People of all ages crammed onto Grant Park’s biggest field to finally see her live, spilling out onto the stairways and sloped hills. Up front, celebrities like Megan Fox and Machine Gun Kelly joined in the anticipation. When Megan Thee Stallion finally came onstage in a laced-up bodysuit sporting punk and classic rock band logos, the crowd let out a collective holler. At last, it was time. 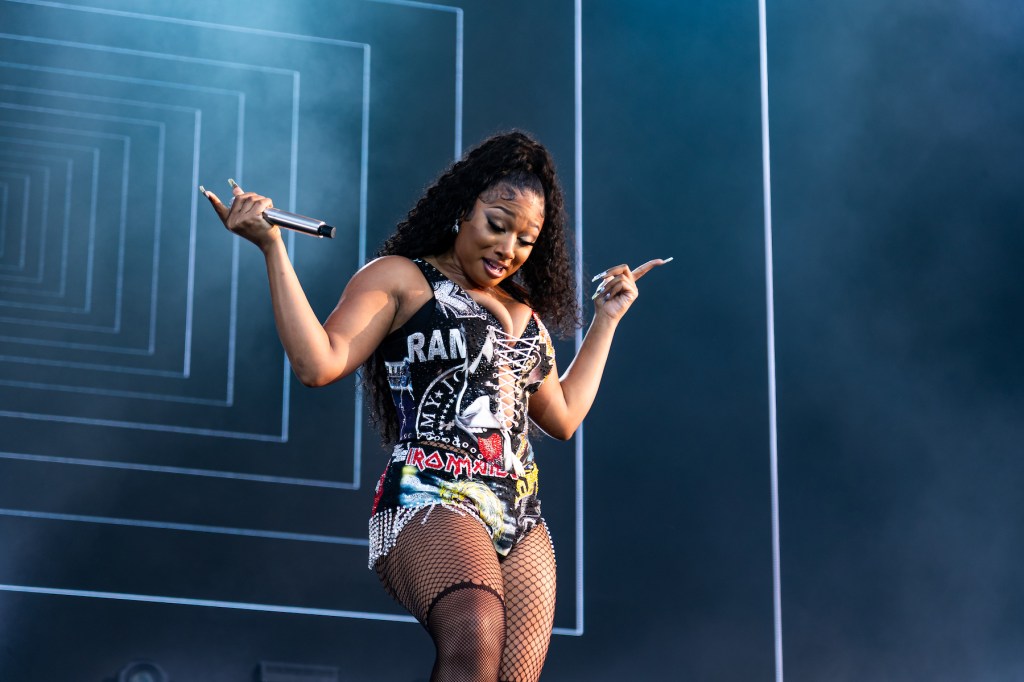 “We outsideee!” yelled Megan Thee Stallion, elongating the “e” as a huge smile spread across her face. Basking in rays, she leaped from song to song while backup dancers moved in a synchronized swirl around her. There was no doubt that Megan Thee Stallion would dominate the stage at Lollapalooza, but the contagiousness of her confidence was surprisingly swift.

Everything Megan Thee Stallion did suggested you could, and should, do it too: Twerking during “Simon Says,” coupling a dramatic over-the-shoulder stare with a hair flip, rapping every word to “What’s New” without tripping up once. Even her old Tina Snow tracks like “Freak Nasty” and “Big Ole Freak” were delivered with the allure of a shiny new toy.

Despite her lyrical claims that she’s a “cold bitch,” Megan Thee Stallion radiated warmth onstage and kept checking in on her fans and doling praise right back to them. “If you love yourself, make some motherfuckin’ noise,” she yelled. “That’s what the fuck hotties do: we spread positivity!” None of her compliments were cheap self-care advice devoid of sincerity. They were benedictions to fans who want to feel proud of who they are. Looking around, it seemed to work. Six different women near me spent the entire set dancing along to Megan’s moves solo, glancing up at the screen to time their moves to hers while singing along. Elsewhere, a female couple took turns cheekily grinding on one another to “Body.”

Megan Thee Stallion extended her blessings to specific individuals, too. She shouted out her lesbian and bi fans specifically during one break and surrendered the center-stage space to her backup dancers so they could flaunt their talent through freestyle moves. Later, she paused a song to address a woman crying near the front row. It turned out the woman was hit in the head during the set and was feeling overwhelmed. Wasting no time, Megan Thee Stallion verified her toughness and reminded the crowd to look out for one another, both physically and mentally. “I’m sorry, friend. Real hot girl shit,” she said. “Y’all killin’ it but don’t go knocking one another out.” 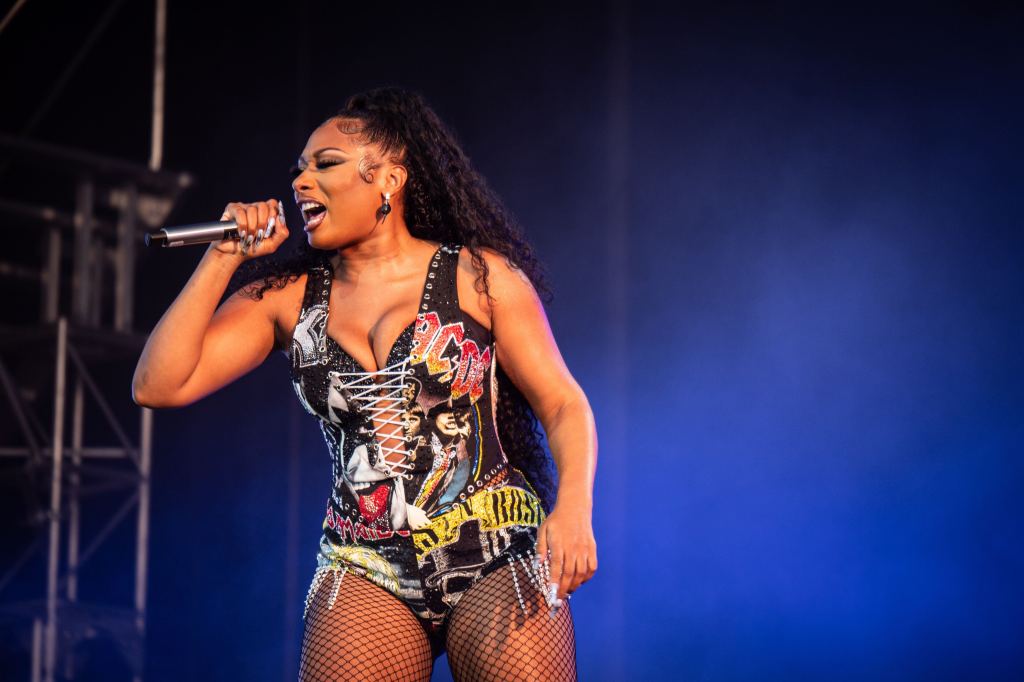 That casual yet constant gassing up became a two-way street when the airy beat of “Hot Girl Summer” kicked in. Megan Thee Stallion looked right at home while sharing the live rendition of her breakout single without thousands of fans on a hot summer afternoon, the gem-encrusted tassels on her bodysuit glittering in the sun. “Hot Girl Summer” launched Megan Thee Stallion into the elite tier of hip-hop luminaries alongside the likes of Beyoncé, Cardi B, and Gucci Mane — all of whom she would go on to collaborate with shortly after the single’s release. It also became a pop-culture tagline rehashed by brands who cashed in on her success without permission. Although it wasn’t explicitly performed as a pushback to those companies, Megan Thee Stallion’s performance inherently felt like a reclamation of her catchphrase, her art, and the global confidence boost she caused. You could practically see the cowboy hat-shaped crown resuming its place on her head.

At the end of her hour-long set, Megan Thee Stallion took a victory lap with her smash hits “Savage” and “WAP,” both of which turned into karaoke singalongs with a crowd that memorized every word. There was no need for her to keep rapping into the microphone with an audience that loud. She had, factually speaking, become a true celebrity.

In the time that had passed since releasing “Hot Girl Summer,” Megan Thee Stallion racked up two No. 1 Billboard singles, scooped up six BET Awards and won three Grammys, one of which marked the second female hip-hop artist to win Best New Artist in history, following Lauryn Hill in 1999. This is the first full summer where Megan Thee Stallion could see the impact of “Hot Girl Summer,” and yet it was no longer her biggest hit solely because her other singles eclipsed it in popularity. But frankly, Megan Thee Stallion couldn’t care less. After nearly two years, she finally got to perform her songs, her way, on her own time, to her biggest fans. It’s a glow-up so bright it’s basically white-hot.