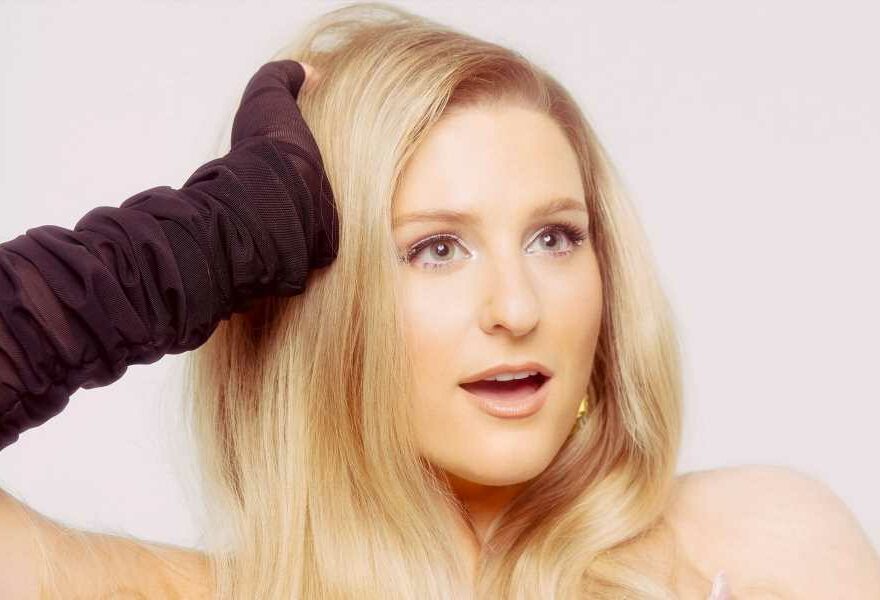 The last time Meghan Trainor dropped an album in late January 2020, the world was weeks away from being shut down. And despite having bops like “Nice to Meet Ya” with Nicki Minaj, a collab with the Pussycat Dolls, and earworms like “Funk” and “Evil Twin,” Treat Myself easily became one of Trainor’s most underrated works.

Plus, with the pandemic-caused lockdowns, Trainor was unable to perform a single song from the pop-perfect record. “It was sad and heartbreaking. I was like, ‘Well, this sucks,’ ” Trainor tells Rolling Stone.

Fast-forward to 2022 and Trainor is preparing for a new era in her life and music as she announces her musical comeback with LP Takin’ It Back, out Oct. 21.

Things are way different now for the singer. “She’s a motha!” says Trainor, who welcomed her son Riley with actor Daryl Sabara in 2021. “I feel like my songwriting is much better since I had a C-section.”

The album is filled with relatable lyrics, a reggae bop, a Latin banger with Natti Natasha, and, of course, some Trainor-styled anthems.

“It’s like Title 2.0. It’s my old school,” she says, referring to her 2015 breakthrough, which featured songs such as “All About That Bass” and “Dear Future Husband.” “It’s true to myself in all the weird genres that I go to, but also modern with my doo-wop in there.”

She adds: “The lyrics are stronger than ever, and it’s still a party.”

Chatting with Rolling Stone from a fluffy couch in her basement studio, Trainor shares details of the upcoming record, learning to re-love her body and regain her confidence, and why her therapist probably deserves a songwriting credit.

It’s called Takin’ It Back. Why is that?

I knew before I wrote that song that it’d be called “Takin’ It Back.” I got with Mozella, who wrote [Miley Cyrus’] “Wrecking Ball.” And she said, “You know what’s crazy? All these artists and songwriters coming in are like, ‘I want to do the Meghan Trainor sound.’ ” And I was like, “What the fuck? I have a sound? Do they mean the doo-wop stuff?” And they’re like, “Yeah.” And I was like, “Oh, dur! I could do that in my sleep.” Like, that’s easy. So I was like, ‘Let’s do that.” And then we did “Don’t I Make It Look Easy.”

I heard that and I got that exciting feeling that I haven’t got since “Dear Future Husband” of “Oh, wow, people are gonna love this.” I wanted to “take it back” to that first sound that I had. And that song “Takin It Back” is about taking it back to the good music when they had real instruments.

I think it could also be like you taking back your-

What? Taking back my power? Yeah, because also during the pandemic, I lost that. I for suresies lost it, because I went to an event where Miley Cyrus was at. And my team was like, “You know her, go say hi!” And I was like, “I don’t want to bug her.” And they’re like, “What?”

I just felt like anything I ever achieved is all gone. I haven’t been out in public and [for] so long trying to be safe, and it crippled me a little bit with my confidence. And so coming back with music, I was also so hard on myself. I thought all these songs were trash. Every idea I would come up with, I would say, “Is this trash or amazing?” “Is this garbage or is this dope?” And everyone was like, “This is your best work yet.” I think when I started seeing [and] hearing people that don’t have to be nice to me tell me that this music is good, that’s when I was like, “Maybe I do have something special.”

Talk to me about “Mama Want to Mambo” with Arturo Sandoval and Natti Natasha.

We were looking up old-school music and what was popping back then, [and] also how I could incorporate new sounds. And I remembered, “Papa Loves Mambo” [by Perry Como]. And I was like, Mama wanna fucking Mambo. And I love alliteration. I love the M and Ms and I thought of all the moms on TikTok who are gonna eat this up and love it just like me and my momma. It’s all about being a working momma who wants to have a night out. I love my baby boy, but I could use a dance break… Natti Natasha is a queen and a mom. So it was destiny. The day it was due was the day she decided to do it for me. She got that shit done in an hour. I swear to God. I was like what? I was convinced it wouldn’t happen, but she nailed it. When I say Natti Natasha’s on my song, people’s eyes get super wide because they’re like ‘How?’ I don’t know, I got lucky.

What’s one of your favorites on the album?

I was always subconscious about my body. And it was really hard for me to love my body. Obviously. I write about it a lot. But after having a C-section and a baby, I got new stretch marks, and then a C-section scar crosses them. Not only am I like, “What body is this?” I’ve never had a scar so seeing all these new marks on me, like literally, I had PTSD after having a C-section because you have to be awake. So I would lay in bed at night and be like “She’s still in me.” I had to learn how to love my body with all this new shit on top of it. And it was frightening and terrible.

I didn’t feel sexy ever. I didn’t want to make love to my mans because I was like “Ew, gross.” and he was like “You’re literally stunning.” So I write these anthems and bangers about loving myself for me because I need them the most. “Made You Look” was one of those songs.

My therapist told me “Look at yourself naked for five minutes.” It’s the hardest thing you’ll ever do. I wrote the song about the fact that, yes, I could wear all the fancy clothes ever and I can be dressed up with my stylist and my makeup artist. But I can still be hot with nothing on. I can still look good naked. So that was that song. That’s a special one.

Talk to me about “Bad for Me” and working with Teddy Swims.

I wrote it about a real situation that happened. Toxic relationships can be in your family and you can step away from them and it sucks. But it’s doable. I wrote that song with Wrabel and Stint. They were literally strangers! Then that night, I was laying in bed with Daryl — my husband — and he knew how much of a Teddy Swims fan I am. I always say like, “I’ll have my Teddy duet someday.” Daryl looked at me and was like, “Is this your Teddy song?”

I texted the writers and and they were like, “We know Teddy.” They put me in a group chat and I was in bed screaming. I sent the song and he was like, “I would be honored to be part of this.” And then literally, a week later, he came to my house, met my whole family. And I cut his vocals in [my studio]. I taught him the song and walked him through it and he’s been my bestie ever since.

How has becoming a mom changed the music-making for you?

Things have definitely gotten more emotional. And life is extra precious. I’ve always been terrified of death. Like, it’s my biggest fear. That’s why “Final Breath” [dedicated to husband Daryl] closes the album. You hear a lot of my impending doom for death in this album, too. But when you have a baby, too, it’s like, “Oh, I want to live until I’m 110 so I can be here as long as I can.” I can’t imagine a world where I don’t have him and he doesn’t have me. So that’s what having a baby’s like. Your fear of death just escalates!

Let’s talk about the album cover.

My body is amazing. I worked really fucking hard on my body. My lifestyle is different. I’ve got a dietitian and a trainer because I am blessed. They’ve helped me learn how to live forever and how to be healthy. And 60 pounds of weight fell off. It didn’t fall off. It crawled the fuck off. I’ve never felt better, more confident, happier, and healthier and my skin is flawless. What was the question?

Oh, right! I wanted to show off my body and I sure fucking did. I don’t Photoshop. I don’t break my bones like that. Leave that shit plain! But if we see nipple… hide that. We also wanted: she’s mother but she’s elegante. And she’s fancy. So she’s in a Balenciaga full bodysuit. I was really proud and impressed!