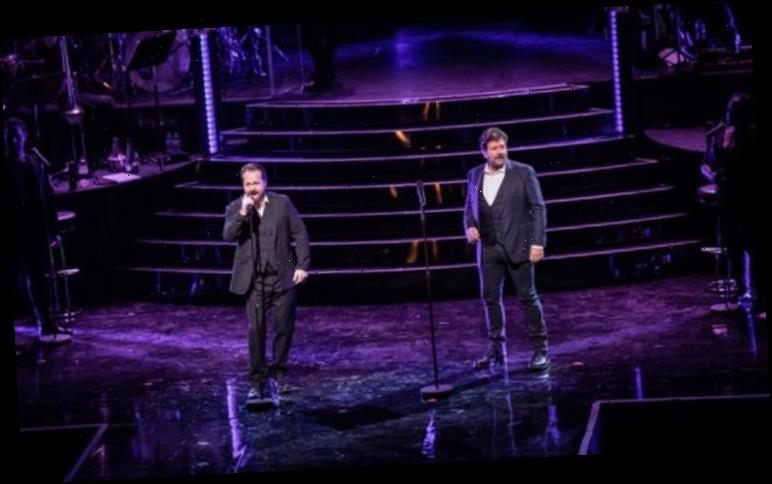 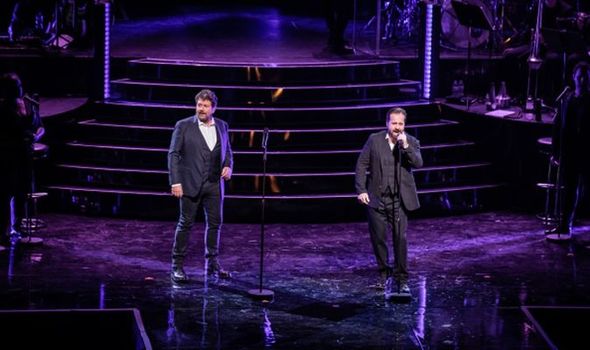 After three chart-topping albums together, the irrepressible pair have a fabulously festive one coming out this Christmas and have just announced a new UK tour, kicking off next November. Their grand bromance will also see them headlining the relaunch of London’s West End with the return of the concert version of Les Miserables, which opens on December 5, 2021 at the Sondheim Theatre.

Last year, we met up in their dressing room backstage at Les Mis. It was a riot with Michael falling off his sofa in fits of giggles more than once. This time we caught up on Zoom from their homes and it was no less ridiculous.

During lockdown, theatre rehearsals are actually permitted but the devoted pals admit that they are always in touch, wherever they are.

“We talk on the phone all the time, we send texts,” Alfie says. “He’s my best friend.”

That’s about as sincere and sensible as it gets.

I remember they told me last time about how Michael mooned Alfie when they first met during a performance of Kismet at the London Coliseum ten years ago.

Does Alfie worry it will happen over Zoom?

“It wouldn’t be the first time,” he says as Michael shouts, “He loves it” and stands up and turns around, starting to lower his trousers. 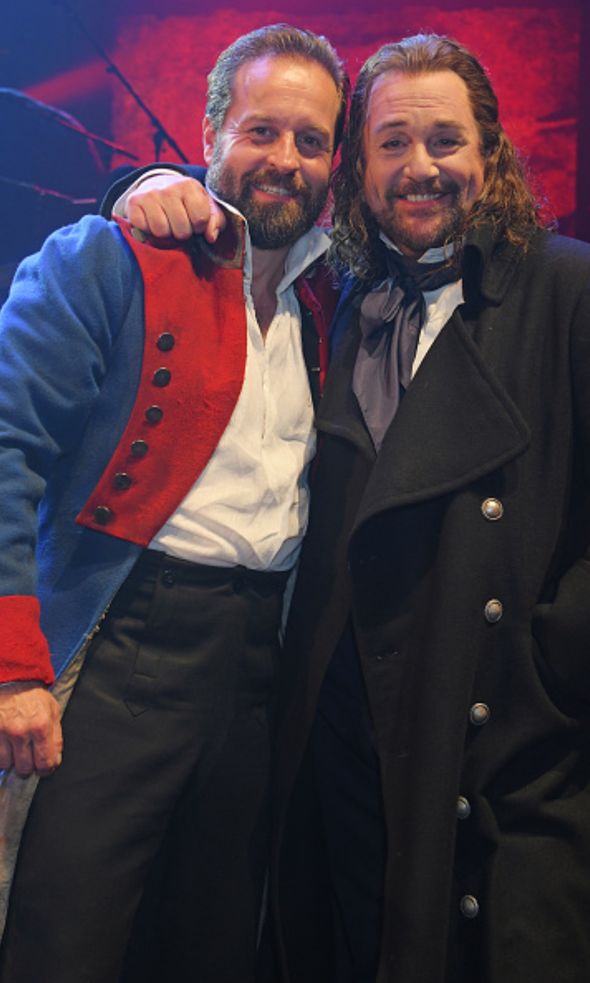 “The problem is, you can’t tell the difference,” Alfie points out. “You never know which end he is speaking from.”

“Oh please,” Michael cackles, “I’m always talking out of my backside, we all know that.”

Their latest album includes a new track, My Christmas Will Be Better Than Yours, and I wonder what Michael thinks he does better. He doesn’t hesitate: “Sing!”

Alfie adds: “He also cooks better than me. His roast dinner is bloody amazing and he baked me cakes last time we were on tour.”

Michael, of course, went on a special edition of Celebrity Bake Off For Sport Relief in 2014. He is still smarting over losing.

“Guess who beat me? Emma Freud, who is married to Richard Curtis, the man who set up Comic Relief. It was a fix. I’m already planning an injunction.”

Attempting to restore order in the court, I can’t resist asking what Alfie would wrap in a “Boe” for his friend under the Christmas tree.

“Me!” he smiles, “But fully clothed. Something to unwrap!”

Michael leans into the camera, “Let’s put it the way… he doesn’t have anything terribly big to give me.”

He puts on a cod Northern accent and waggles an imaginary cigar, “There’s nowt wrong with our Alfie downstairs!”

Poor Alfie says: “You do realise this is going in the paper!”

Michael adds: “Oh Alf, if I had the money I’d get you the best motorbike. I know you want another Harley.”

I suggest it would be wonderful to imagine them many years from now, still touring the country with Michael perched on the back of his friend’s motorbike.

“Oh no, I’d have to be in a sidecar with my hairnet,’ Michael says. “We’d be like the Two Fat Ladies. He’s not getting rid of me ever. I’m clinging on for dear life.”

Speaking of larger ladies, Michael will reprise his classic turn as the curvaceous mother Edna Turnblatt in the musical Hairspray, when it returns to the London Coliseum next April. 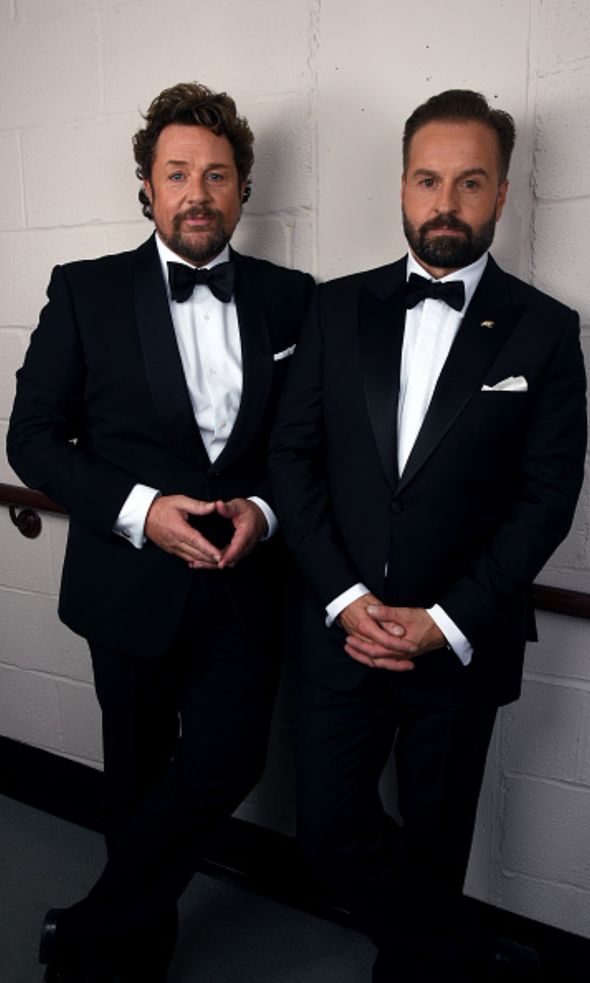 Does Alfie worry that his notoriously shy and retiring friend will struggle with slipping into drag every night?

“Well, I think he will eventually get used to dressing as woman…” he jokes. “Oh hang on, here he goes.”

We both crack up as Michael disappears from the screen and comes back clutching an enormous pair of bright pink stilettos.

“You know he wears those while he’s cooking,” Alfie says.

“It’s part of my gluteus maximus workout. They’re pert as anything,” Michael grins. “Alfie hasn’t seen me in the role yet but he will be strangely drawn to me. He’s gonna go, ‘Oh, I probably would!’”

In total contrast, Michael gets to show off his range as the dour and villainous Inspector Javert in Les Miserables and says he relishes playing against type.

“That’s what I love,” he says. “I’ve only played the baddie a couple of times in Sweeney Todd and The Lady In White and, trust me, they are the best roles. I love doing Javert’s whole descent into madness and death – and then I get half an hour off while Alfie does all the hard work to the big finish. But seriously, this show is in my DNA from playing Marius when it first launched back in 1985. Even all these years later, the music still gets me. When Alf start singing Bring Him Home it is just bloody amazing.”

On a (briefly) more serious note, the dynamic duo has been spearheading a campaign to get people writing letters again during lockdown.

“It’s really important to bring people together,’ Michael says. “I love receiving a hand-written note and I always keep them. I’ve got ones from Andrew Lloyd Webber, Stephen Sondheim and the fans. Lovely things that came at times when I really needed them.”

He pauses for dramatic effect, before adding: “I’ve had nothing from Alfie.”

I leap to the Lancashire lad’s defence, mentioning that he famously popped a letter through Michael’s postbox many years ago when he was still a drama student, asking for advice. Michael obviously didn’t keep that one.

“He didn’t even reply,” Alfie sniffs. “So why would I send him one now?”

“It’s still with the police,” Michael says. “They’re doing forensic tests. I mean, would you reply to something in purple crayon?”

In a final attempt to bring us back on track, I ask them what they would say if they had a chance to do a Queen’s speech to the nation at Christmas.

“It never changes,” Michael says. “Peace on Earth and goodwill to all man. No matter who you are and aren’t able to spend it with this Christmas, it’s about reassessing, about rebirth. We are going to find ourselves in a different world next year but who’s to say it can’t be a better world? We can learn from this. Hold on to the beautiful things and make them last throughout the year.”

Naturally, he can’t resist adding: “Oo, that was gorgeous. You see? I should actually have my own religion.”

We turn to Alfie for his words of wisdom: “What he said. I always just let him rabbit on. But I think we should all celebrate that we got through this year and let nothing spoil the time we have with our families and loved ones. We have to believe things will get better. It’s been a terrible time for us all but we’ll come through this as stronger people, a stronger nation and better friends.”

Michael agrees: “We’ve seen the best and worst of people. Yes, we get low and worried. We all hate uncertainty, but we don’t panic. Of course we are frustrated but we will come together as a nation. We’re British. We always find a way.”

Michael Ball & Alfie Boe: Together at Christmas is out on November 20. The Ball & Boe 2021 UK Tour is on sale now, tickets from livenation.co.uk