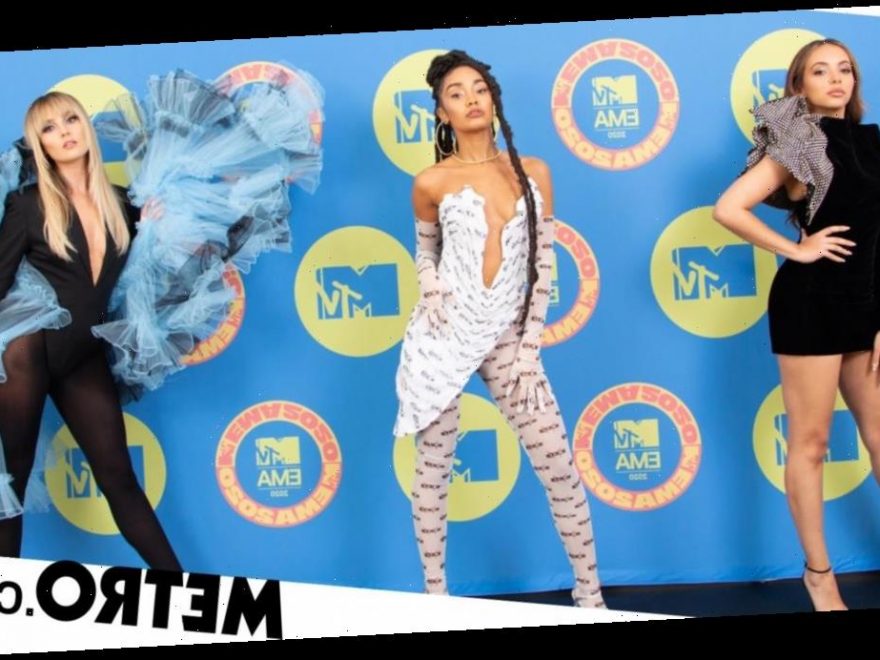 It’s a big night for the Holiday hitmakers who are nominated and also hosting the awards show for the first time.

However they’re missing one member as Jesy Nelson was sadly forced to pull out of the event due to an illness.

Perrie Edwards, Leigh-Anne Pinnock and Jade Thirlwall looked a vision as they rocked up in stunning gowns

In just one of her outfits of the night, Perrie wore a black tuxedo on the red carpet with an open neck and blue tulle around her shoulders. Leigh-Anne stood out in an orange minidress with puffball sleeves and her hair in dreadlocks while Jade donned an electrifying pink tie-dye suit.

Rita Ora, who presented an award, stunned on the virtual red carpet in a yellow ruffled mini dress finished off with a black headband and tiny veil.

Sam Smith cut a casual figure as they hit the red carpet and performed Diamonds in a double denim combo with jacket and jeans.

Doja Cat kept it minimal with a sheer dress covering the rapper’s black underwear. During the show, she performed a rocky version of her number one single Say So complete with electric guitar.

In between hosting, Little Mix performed their new single Sweet Melody in matching white outfits and while they slayed the set, fans were no doubt missing Jesy.

It was announced over the weekend that Jesy would not be able to join her bandmates at the awards ceremony after falling ill.

‘We’re so sad Jesy won’t be able to join us tonight, but we have such an amazing show in store for you all x,’ Little Mix said in a tweet.

The group have just released their new album Confetti which features a string of racy lyrics that fans are loving.

Lady Gaga has received the most MTV EMAs nominations this year while Little Mix, Doja Cat, DaBaby and BTS are among other nominees.

Tune into the MTV EMAs tonight from 8pm.

MORE : The Trials of Oscar Pistorius: What happened on the night Reeva Steenkamp was murdered?