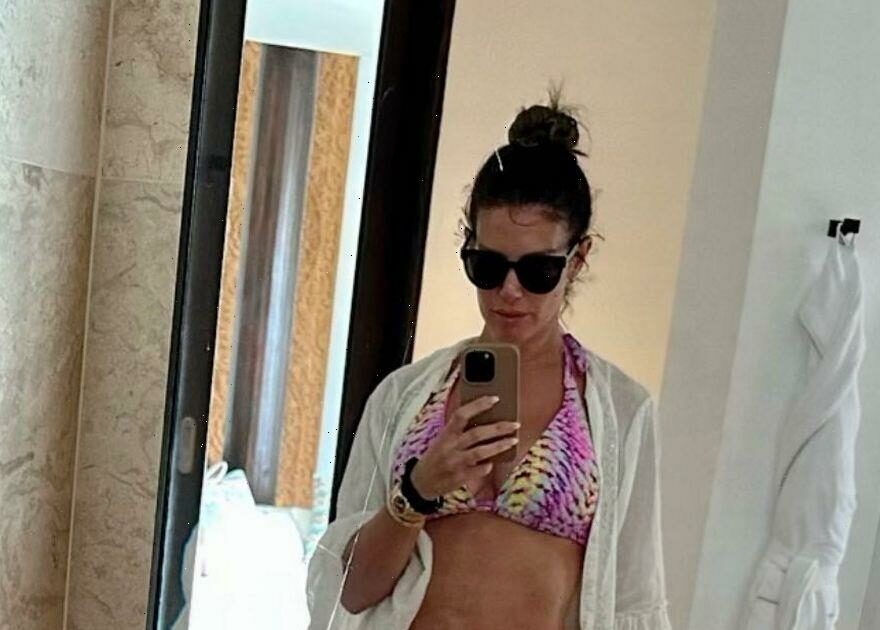 Rebekah Vardy didn't seem to be letting her tough year get her down as she showcased her killer abs in a tiny bikini.

The WAG – who is married to footy ace Jamie Vardy – looked relaxed and happy as she struck a pose in the skimpy two-piece during a tropical family holiday.

Her selfie was taken in a bathroom and showed the star in a pink, purple and yellow patterned bikini with high bottoms to display her long legs and a low cut waist that flaunted her dynamite abs.

Rebekah's lustrous long dark hair was pulled back in a messy bun with a few escaped strands hanging loose.

She had seemingly just headed in from the sunshine as she was wearing a thin white cover up that hung to mid-thigh and a pair of huge dark sunglasses.

The former I'm A Celebrity… Get Me Out Of Here! camper, 40, appeared to be make-up free and she looked fresh-faced and natural as she snapped the sizzling shot.

Mum-of-five Rebekah hasn't shared where she has jetted off to but this week she posted an image on Instagram showing the family on a deck in a tropical location, with the beach and palm trees visible behind them.

The star has had a difficult year after losing her high-profile Wagatha Christie case against fellow WAG Coleen Rooney.

The scandal had been rumbling on since 2019 when Coleen, wife of Wayne Rooney, told her fans that someone had been leaking stories about her to the press and pointed the finger at Rebekah's Instagram account.

Rebekah has maintained that she is innocent and took action for libel.

However, she lost and could now end up having to fork out over a million in costs.