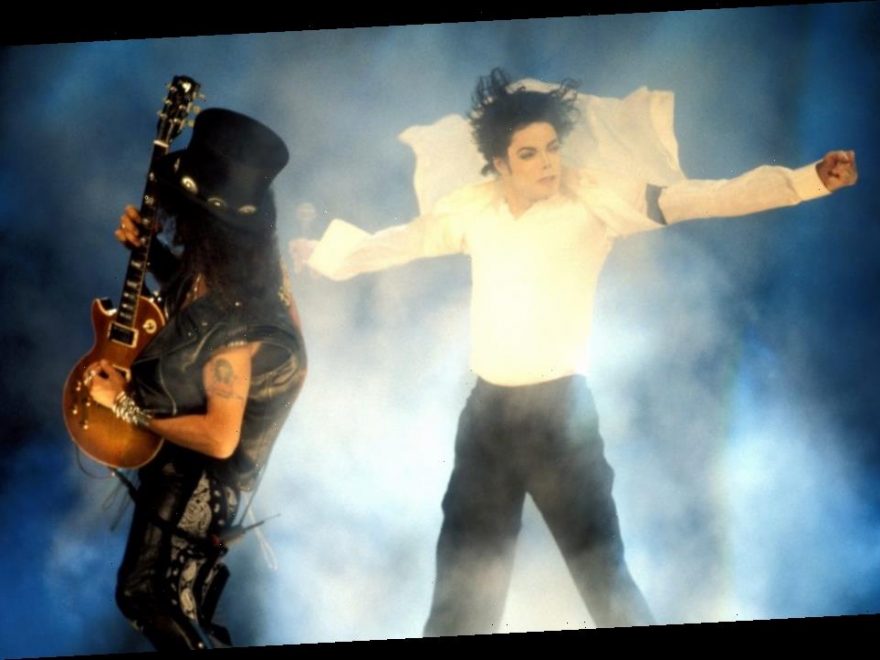 Although he generally didn’t make rock music, Michael Jackson did collaborate on a song with Slash of Guns N’ Roses. Afterward, Slash got to socialize with Jackson and formed opinions about Jackson’s talent. Here’s how the public reacted to a track featuring two musical icons.

Though Jackson was the King of Pop, he worked with rock stars now and then. For example, he famously duetted with Paul McCartney on “Say, Say, Say” and “The Girl Is Mine.” In addition, Clash reports he worked with Slash on a song from his album Dangerous: “Give In to Me.”

According to a persistent rumor, Slash played the riff from “Black or White,” a song from the same album, but Slash confirmed this rumor is false. Slash did, however, make an appearance in the video for “Black or White.” In an interview with Kerrang!, Slash discussed how he felt when he had the opportunity to work with Jackson.

How Slash felt about Michael Jackson on a personal level

“Initially, it was a phone call from my manager where he said, ‘Michael is trying to get in touch with you,’ and I was like, ‘Wow,’” Slash said. “So I called him back and he wanted me to play on Dangerous. We made a date and I went down to the Record Plant in Hollywood and he was there with [actor] Brooke Shields…. So we hung out for two minutes and they went off to dinner and left me with this song.” Although the aforementioned meeting was brief, Slash did get to socialize with Jackson later on.

“I did my thing, he really dug it and afterwards he kept asking me if I’d be into doing this, or doing that,” Slash recalled. “I’d do some shows here and there and it was fun because he was such a pro, and he was such a f*cking talent from on high. That was the main thing: he was so amazingly musically fluid. Such a treat to be around.”

How the public reacted to ‘Give In to Me’

Although Slash was a featured artist on “Give In to Me,” his name recognition did not help the song commercially. “Give In to Me” didn’t chart at all on the Billboard Hot 100. This is interesting, as “Give In to Me” is an example of the emotive hard rock for which Guns N’ Roses is known.

Though Jackson had hits after “Give In to You,” the poor chart performance of the song showed he was past his Thriller/Bad commercial peak. Regardless, the song must’ve resonated at least a little, as popular rock band Three Days Grace recorded a cover of it for their album Transit of Venus. Although it wasn’t a hit, “Give In to Me” remains a fascinating example of two musical geniuses working together.