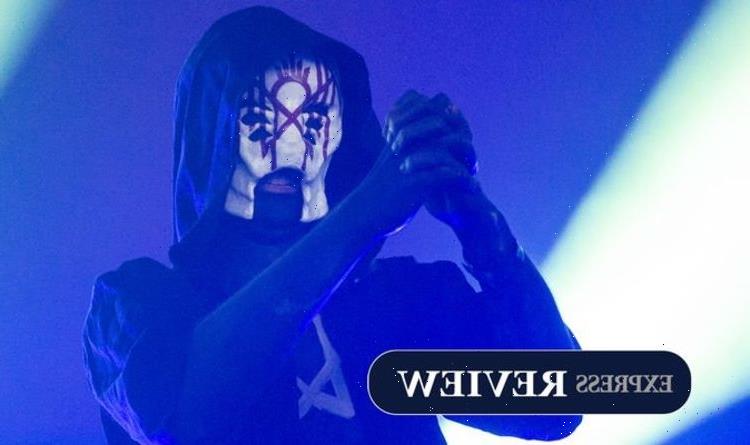 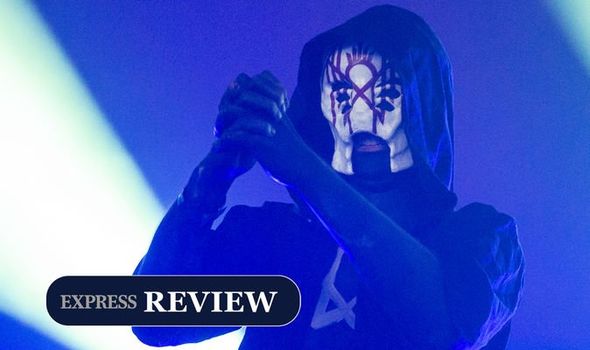 For a while I’ve been wondering how Sleep Token’s anonymous dark magician shtick would translate to the stage. Their albums and music videos follow a strict aesthetic that demands your attention and incites analysis. Live, somehow, the band have crafted something entirely different: a show that is pensive, personal, and moving.

Like a dark messiah, Vessel – the band’s masked singer – floated onto stage with hands aloft to the sound of his followers screaming his name.

He was joined by a pair of black-robed choir singers, stoic and immovable throughout the entire performance.

Vessel cooed the first piano-led half of Atlantic to screams that outweighed his voice. His guitarists soon crawled onto stage like demons to complete the band’s set-up and finish out the song with power immeasurable.

Without skipping a beat, the sect launched into Hypnosis, one of their heaviest tracks.

Through it, Sleep Token proved they have the musicianship, skill and presence to be a pure metal band if it ever took their fancy.

But it was some of the band’s more emotional and enchanting tracks that really blew the roof off the make-shift place of worship.

Fall For Me, in particular, was an absolute jaw-dropper.

I recently deemed it the worst song on the album, but I will happily eat my words. I was wrong.

The band brought on a quartet of interpretive dancers to illustrate the alluring and mystical message of the song to Vessel’s beautifully harrowing voice. It made me look at the piece as a more performative, vulnerable instance in one’s most dire moments. This notion was felt in Shepherd’s Bush, as there wasn’t a dry eye in the house. A truly special moment for the band, to be sure.

Just before that, The Love You Want gave Vessel the opportunity to explore his stunning and unwavering vocal performance.

Few singers sound pitch-perfect live, but the macabre maestro was absolutely divine. As if you were listening to the album; completely effortless.

Vessel spent much of his time exploring his own personal performing space, hands flittering between nervous delight and anxious responsibility to the thousands in front of him.

But he looked the most at ease when he approached the edge of the stage, prompting his disciples’ hands to rise up in an effort to touch their newfound leader.

Through Vessel’s guttural screams and delicate refrains that echoed through the halls of the venue, Sleep Token’s fans were visibly moved by their music’s messages through more than one song.

I’ve seen emotional fans at gigs before – I’ve been one – but this somehow felt different.

This Sleep Token experience – and it is an experience – felt like a movement. The advent of a band that are surely on their way to commanding the presence of the largest stages in the country, and with more of a presence than some of the biggest bands in the UK. There isn’t another band in the UK that can come close to building an atmosphere like this.

Sleep Token did not just deliver an almost religious experience that thrilled their fans and expanded on their music with new riffs and motifs, they created a night of worship to their fans, their music, and the future they are no doubt carving with every single night on stage. It almost doesn’t get better than this.

Sleep Token’s latest album, This Place Will Become Your Tomb, is out now.