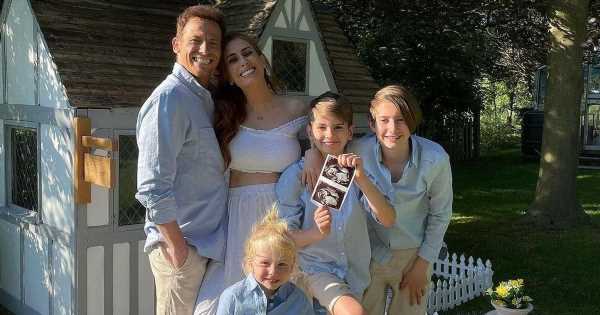 Stacey Solomon, 31, is an "emotional wreck" over her pregnancy reveal after suffering several miscarriages.

The craft-loving star revealed to her Instagram followers last night that she and her fiancé, Joe Swash, are having another baby.

After hoping to be more "together" following the announcement, Stacey remained emotional and thanked her fans for their support.

Stacey and the former EastEnders star had been trying for another baby for "a really long time" but suffered multiple miscarriages, one occurring at six weeks.

Sharing an image of herself cuddled on her sofa with her two dogs and one of her sons Stacey was “sobbing” reading messages from fans.

"I'll try and answer some of your messages tomorrow goodnight, love you all to the moon and back.”

Stacey wrote the touching message alongside a beautiful picture of her and fiancé Joe in a tight embrace with a broad, beaming smile.

Although they were reluctant to attend another scan, the couple were elated to receive the news they were pregnant once again.

Stacey commented, “I feel so nervous and excited and happy and scared all at once.”

The new addition will be the fourth child for Stacey and the second for her and fiancé Joe Swash together.

In an emotional video, Stacey revealed she told her other children the exciting news and painted their Wendy house together to commemorate the occasion.

The family also painted their handprints onto a bench in their garden. They marked the final handprint with the sonogram scan of their new "pickle."

After the announcement, Stacey spoke of her children, “Boys we are so so so excited for you all. You are already the most incredible brothers we could have ever imagined.”

The couple recently moved to their “forever home” which they have aptly dubbed "Pickle Cottage" in celebration of their children.

The two recently welcomed their son Rex, two, in May 2019.

Stacey’s two other sons, Zachary and Leighton, are from a previous relationship.

Joe also has a son from a previous relationship, 13-year-old Harry.

After Joe proposed on a romantic walk over the Christmas holiday, the pair are due to get married at their "forever home" later this year.