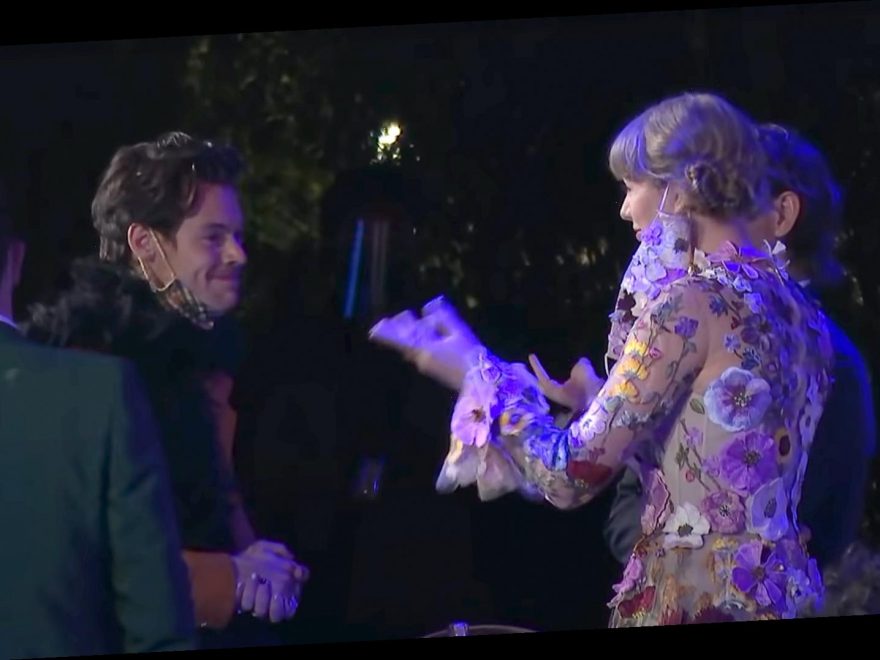 There's no bad blood between Taylor Swift and Harry Styles.

On Sunday night, the exes came together at the 2021 Grammy Awards, where they both took home big prizes. Swift, 31, nabbed album of the year (a history-making achievement, as she became the first woman to win the award three times) while Styles, 27, took home his first golden gramophone for best pop solo performance.

The Recording Academy later shared an exchange between the former couple at one point in the evening when Styles came over to Swift's table for what appeared to be a friendly catch-up chat.

As Styles was announced as the winner of best pop solo performance for his track "Watermelon Sugar," Swift — who briefly dated the former One Direction member from late 2012 into 2013 — stood up and applauded, smiling and nodding in his direction. In his acceptance speech, Styles said in part that he feels "very grateful to be here" and shouted out the talents of his fellow nominees: "I feel very honored to be among all of you, so thank you so much."

Backstage, the singer and Don't Worry Darling actor called the win "an incredibly sweet icing on the cake of what I get to do every day."

"I feel incredibly lucky to get to work in music and make music as my job every day," Styles told reporters in the press room before thanking the Academy. "And I want to thank my friends for giving me an environment to be free to make the music that I want to make, and supporting me along the way over the last 10 years."

He added, "And everyone who made this record with me, and my label and my managers, and everyone who supports me and everything, all of it. Thank you so much. I feel very, very lucky tonight."

Check out PEOPLE's full Grammys coverage to get the latest news on music's biggest night. Meanwhile, Swift, who has been dating British actor Joe Alwyn since 2016, took home the coveted album of the year trophy for the third time, for her first 2020 surprise album, Folklore.

While accepting the award, she gave a sweet shout-out to her boyfriend, 30, who co-wrote album songs "Exile" and "Betty" with her, as well as "Champagne Problems," "Coney Island" and "Evermore" on its successor Evermore.

"Joe is the first person that I play every single song that I write, and I had the best time writing songs with you in quarantine," Swift said.

She went on to thank all of her "collaborators," as well as "James, Inez and Betty and their parents," referencing close pals Blake Lively and Ryan Reynolds and their three daughters. "[They] are the second and third people that I play every new song that I write," Swift said.