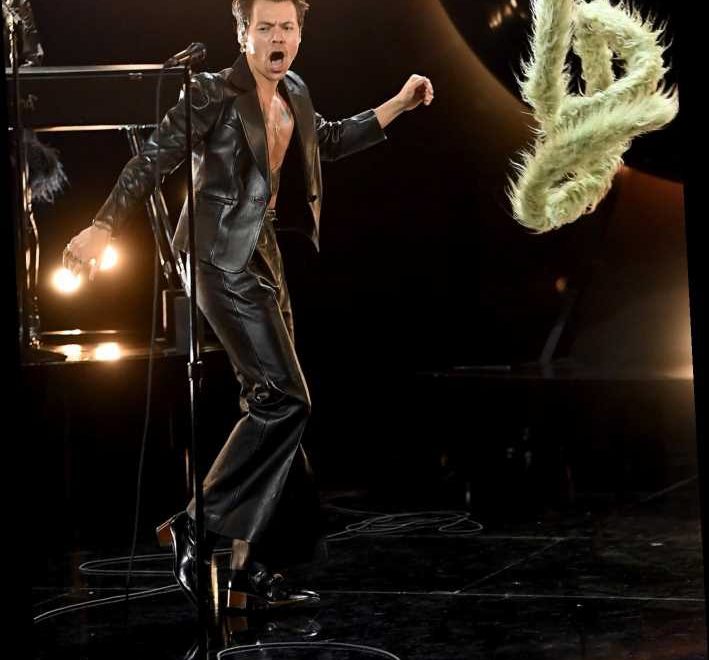 Harry Styles kicked off the show with a jazzy rendition of “Watermelon Sugar.” Dressed in custom Gucci and a fuzzy green boa, the singer amped up his Grammys debut with velvety vocals and a feel-good performance. Next up, Billie Eilish appeared on stage with brother and musical partner Finneas to deliver their dreamy rendition of “everything i wanted.” HAIM closed out the opening trio of acts with their high-energy performance of “The Steps.” Black Pumas delivered an electrifying showing of “Colors,” which was received with roaring applause from the audience.

A Moment to Remember Da Baby was joined by Anthony Hamilton, Roddy Ricch and a brilliant choir for a soul-stirring rendition of “Rockstar.” Bad Bunny and Jhay Cortez got everyone swaying their hips to their global hit “DÁKITI.” Dua Lipa and Da Baby ate up the stage with their disco power anthem “Levitating.” Then, Lipa made a quick costume change and broke into a dance number as she brought the house down with her song “Don’t Start Now” for the ultimate finish. Laying down on a grassy roof of an elaborate cabin set, Taylor Swift began her sweet medley with “Cardigan” before grabbing her guitar to strum to “August” — along with Jack Antonoff and Aaron Dessner — and closing out with “Willow.”

Forever in Our Hearts For the ceremony’s moving in memoriam segment, Bruno Mars and Anderson .Paak reunited, along with Lionel Richie, Brandi Carlile and Brittany Howard, to honor the music legends we lost in 2020. New mom Mickey Guyton — the first Black solo female artist to earn a Grammy nomination — gave a stunning performance of “Black Like Me.” After winning best country album for Wildcard, Miranda Lambert blessed the crowd with her song “Bluebird.” Maren Morris and John Mayer joined forces on their hit “The Bones.” Best new artist winner Megan Thee Stallion lit up the stage at her very first Grammys with a dazzling blinged-out show of “Body” and “Savage.” Cardi B went intergalactic with her single “Up” and got the crowd screaming when Megan Thee Stallion came back out to throw her verse down to their smash hit “WAP.” Doja Cat and her dancers touched down from outer space to put a spell over the crowd with “Say So.” All the way from South Korea, BTS exploded onto the screen with their fan-favorite global smash “Dynamite.” Roddy Ricch started off at the piano to perform “Heartless” before ending his set with his chart-topping song “The Box.”