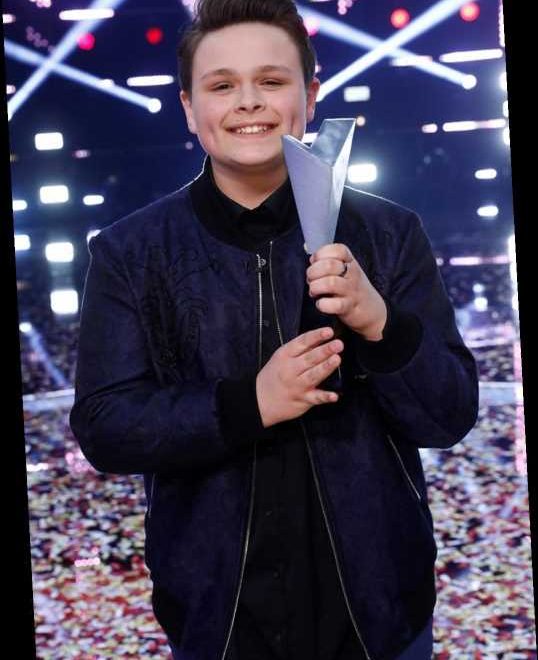 Newly crowned Voice winner Carter Rubin couldn't be more proud to have given his coach Gwen Stefani her first victory on the show.

On Tuesday night, the 15-year-old Shoreham, New York, was named the champion of season 19 of the NBC singing competition series, much to the delight of the No Doubt singer, 51.

"If I had a motive to win, it was definitely for Gwen because she is such an excellent coach, and she deserves all the credit in the world," Rubin tells PEOPLE. "Somehow she hadn't won yet, which is crazy because she's so excellent at what she does. I was so lucky and so happy to give her the win that she so deserves."

While waiting for host Carson Daly to reveal the winner, Rubin says Stefani gave him some sage advice to calm his nerves.

"Gwen talked to me during the commercial break before that happened and was like, 'This is just a moment in your life. Whatever happens, happens. You're already a winner just by getting here. No matter what happens, you have such a bright future ahead of you,'" Rubin says. "I just stood there, and it felt like someone was pulling a knot in my stomach. I felt like I was going to pass out. It was so nerve-racking, but Carson called my name and I just, I collapsed. I just felt my soul leave my body for a sec. It felt absolutely insane, like surreal." During his time on the show, Rubin says he and Stefani — who shares sons Kingston, 14, Zuma, 12, and Apollo, 6, with ex-husband Gavin Rossdale — built a close bond and that she would even call him her "little son."

"She was my Voice mom, like a motherly figure," he says. "We always joked about how I have my real mom here, and I have my Voice mom. It was just so much fun working with her."

Unlike past seasons, the only family member Rubin was able to celebrate with in-person on Tuesday was his mom due to COVID-19 restrictions.

"It's so weird with COVID," he says. "[I had] my mom there because I'm a minor. After the show was over, she ran on stage to give me the biggest hug. I called my dad, my brother and the rest of my family and they were all just crying and so happy and completely shocked. Not shocked, like they didn't think I could do it, but like they couldn't even believe it was happening."

Especially excited to get the call was Rubin's older brother Jack, who has autism. Throughout the show, Rubin has detailed the special bond that they share.

In addition to his relationship with his brother, Rubin has been open on the show about being bullied for being different. As to what he'd say to his bullies now, he jokes, "How you like me now?!"

"No, no, I'm just kidding," he says. "I think this was the perfect opportunity for me to show that being different and being unique is not a bad thing. It's a really good thing that you can use to your advantage, which, I think, is what I did with my time on the show. So I'm really proud of myself for doing that."

Rubin thanks Stefani and the show for giving him a newfound sense of confidence.

"She always told me to just believe in myself and be myself on that stage because that's what she did in this industry," he says. "That really helped me with my confidence. She's incredible. I think the win, for sure, helped with my confidence. I just know a lot of people are so proud of me and really wanted this for me. I am super happy with the way things turned out." Now the winner of a recording contract, in addition to a $100,000 cash prize, Rubin hopes to make an album in a similar style as "male pop-contemporary artists today, like Lewis Capaldi, Harry Styles, Shawn Mendes and Ed Sheeran."

"I want to keep growing my music career," he says. "Gwen told me that it's time for me to start writing some music, which is definitely what I plan on doing. I have some songs in the folder that I'm working on, and I really want to get in a studio and start to record them."

Rubin says Stefani's business manager said he'd work with him and that Stefani said he "can always keep in touch with her" in the future.

"Expect some more stuff from me," Rubin says. "This isn't the end. I love my Rubies, [my fans]. Thank you guys for voting for me and supporting me throughout this entire ride. I'm so, so blessed to have you."