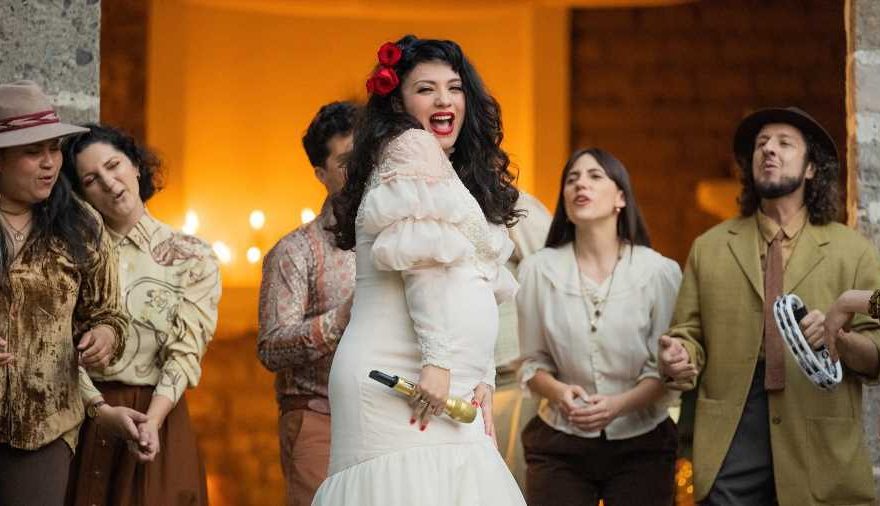 Mon Laferte hit all of the notes during her appearance on NPR’s Tiny Desk (Home) Concert as she sang a set of four songs while rocking a wedding dress at a colonial-style church in Tepoztlán, Morelos, in Mexico.

Backed by a 10-person band that included a bassoon, a jarana, and an oboe, the Chilean singer performed tracks “Tu Falta de Querer,” “Por Qué Me Fui a Enamorar de Ti,” “Se Me Va a Quemar el Corazón,” and “Placer Hollywood.”

To kick off her performance, Laferte walked into the intimate church — wearing an all-white dress, boots, and her signature: a red flower tucked behind her ear — as she removed her veil and torch sang her biggest hit, “Tu Falta de Querer.”

The singer, whose album Seis is nominated for a 2022 Grammy Award in the regional Mexican music album category, then performed her La Arrolladora Banda el Limón song from the church’s altar as she was accompanied by tuba player Diana Gaby.

In true wedding fashion, Laferte’s Tiny Desk showcase ended with a dance party in front of the church as she wrapped “Placer Hollywood.” To end the show, she said, “It smells like baby bump here!” as she grabbed her belly.