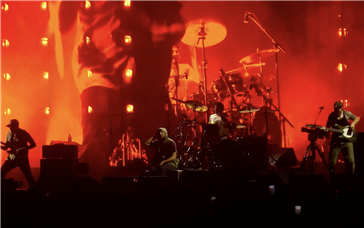 Rage Against the Machine revisited their 1999 track “Born of a Broken Man” live at Cleveland’s Rocket Mortgage Fieldhouse on Wednesday night, performing the song for the first time in 14 years.

The rock band, currently out on their highly-anticipated Public Service Announcement Tour, originally released the song as part of their album The Battle of Los Angeles. A video of the performance reveals that Zack de la Rocha remains confined to a chair after injuring his leg earlier in the tour.

The group has been pulling out past classics during their reunion tour, which kicked off in Wisconsin earlier this month. In Chicago, Rage Against the Machine performed “No Shelter” for the first time since 2007. That song originally appeared on the soundtrack to 1998’s Godzilla. At the Toronto show, de la Rocha joined opener Run the Jewels for “Close Your Eyes (and Count to Fuck).”

The reunion trek, which was first announced in 2019 and then delayed several times due to the pandemic, will keep the band on the road through 2023.