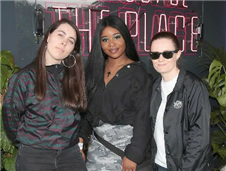 A melodic blend of the talents of three very different Irish artists, the track Butterflies has been gathering momentum in the week since its release, garnering 430,000 YouTube views, more than 60,000 streams on Spotify, and solid support from Irish radio everywhere from Today FM to 2FM and even RTE Radio 1.

Thrust together with the backing of Three Ireland for their Made by Music campaign, pop artist Soulé, singer/songwriter Sorcha Richardson, and electronica musician Elaine Mai have managed to harness an elusive alchemy to produce something a little special. And they couldn’t be happier with the reaction.

“We’re delighted,” reveals Elaine. “The radio stations have really gotten behind it, which is class. There are some amazing DJs there who are really supportive in championing Irish music. Jenny Greene is a huge supporter, and Tracy Clifford on 2FM, Ed Smith on Lost in Music and Kate Brennan-Harding on Today FM as well. They’re doing amazing stuff for Irish music.”

Mayo native Elaine (34) has been a solo artist for eight years and is well known for her innovative remixes, most recently tackling Loah’s Nothing to stunning effect, and her equally impressive take on Pillow Queens’ Gay Girls. Having worked largely alone for almost a decade, the opportunity to collaborate so closely with two other artists on a single track was to tempting to pass.

“It’s not very often that opportunities like this come along especially to work with two artists who are very different as well stylistically and musically,” she says. “I learned a lot. It was a really good experience for me.”

They say three’s a crowd, but any reservations about tackling a track as a trio she may have had were immediately overcome on meeting the other artists. “It could have been a situation where our personalities didn’t get on as well but well all got on so well straight away and that made the whole process easier,” she says.

“We were able to be totally honest with each other and we definitely had different opinions about things and liked certain elements over others, but because we had that really strong relationship – which we still have now, which is brilliant – we were able to create something we were all really happy with.

“That was key for us – we all decided from the get go that we all wanted to be happy with it so we were delighted when that happened in the end.”

Three’s Made by Music campaign is in its second year and earlier this summer released a track by David Kitt, Fedah, and Kean Kavanagh. The brand have been refreshingly hands off with the artists, allowing them full creative control, and the approach has resulted in a series of top notch productions and creative connections which may well result in more collaborations in future.

The only thing that would prevent this particular trio of powerhouse female artists collaborating again is something as mundane as schedules, according to Elaine, who is currently gearing up to release some new music of her own.

It will come two years after the release of her very well received EP, The Colour of the Night, which boasted the beautiful track Enniscrone. While she was writing it her cousin passed away and the instrumental celebrates their childhoods and relationship. For her new project (she hestitates to use the world ‘album’ because ‘I feel like if I do then I’ll have to!’) she took herself off to the wilds of Donegal for a week to write.

“My wife’s family have a holiday home up there and they very kindly let me take it over and turn it into a studio for ten days, so I wrote a lot of new material there,” she explains, and that material will begin to surface, she says, at the end of this year.

“I’ve some songs in there I’m really, really excited about,” she adds.

Elaine’s love of music was sparked at the age of 12 when she sang in a choir and she played in various bands throughout her college years before finally deciding, after the obligatory stint in Australia, that it was something she wanted to pursue as a career.

“I just realised it was something I was really passionate about and I wanted to try and put music out there and see how it would be received. That was 2011 and I’ve been doing it ever since,” she says.

“I think I’ve just kind of done what I wanted to do,” she says of the secret to building a career in a notorious difficult industry. “For me, if I’m into something I’ll just go in that direction. I can only do so much so I’ll try not to take on too many projects at any one time.

“I worked on the Loah remix around Christmas and then I did the Pillow Queens remix and now my main focus is on releasing my new stuff.”

The remixes may have to take a back seat in the coming months. At the best of times they’re something to which she gives enormous consideration before committing anyway.

“What I say to any artist I’m working with when I’m doing a remix is that I’m not going to guarantee them a remix. I don’t know if something is going to work out or not,” she says.

“Quite often the case is that you’re just not finding something you’re happy with and I wouldn’t be up for releasing something I’m not 100 per cent happy with. There have been some instances where I haven’t gone ahead. But obviously [the artists] have to be happy with it as well.”

There were no such worries with Loah and Pillow Queens with both camps voicing their delight at Elaine’s reworking of their tracks. Regarding Pillow Queens’ Gay Girls she adds, “I’m going to start playing that live now soon and I’m really excited about that.” She’s undoubtedly not the only one.