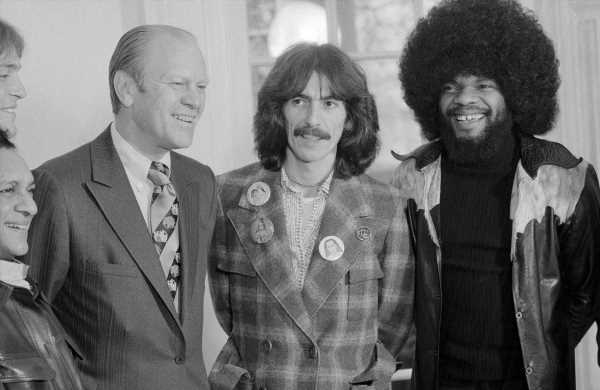 When The Beatles officially parted ways, George Harrison couldn’t have been happier. After years of seeing his songs dismissed and/or cut from Fab Four records, he could fill his own LPs with al the tunes he had. George filled three albums, in fact, on his breakout All Things Must Pass (1970).

Yet being on his own didn’t mean Harrison could simply relax and play music. That became apparent when he began dealing with a copyright infringement suit over his debut single “My Sweet Lord.” That litigation kicked off while “My Sweet Lord” was still on the U.S. charts.

Later that same year, Harrison’s attempt at producing a benefit album brought about more legal headaches. At that point, you could see how the songwriter-performer could write a track titled “Sue Me, Sue You Blues” for Living in the Material World (1973). But the even larger lawsuit involving The Beatles had more to do with it.

To get hit with a copyright suit over “My Sweet Lord” had to sting Harrison. The former Beatle had penned a very personal song with a religious message, and Harrison felt he went out on a limb by releasing it as his first single. Then the lawyers got their hands on it, and Harrison would be dealing with the issue for the following decade.

As for the Concert for Bangladesh, the trouble there stemmed partly from the many guest artists who’d appeared at the show. (Harrison struggled to get record companies to release the rights to their recordings.) Then he began dealing with questions about the concert’s tax-exempt status.

As a result, some funds raised by the benefit concert took years to get to their rightful place. That wasn’t anything new for Harrison. During these same years, he got to know all about why one might “hold the block on money flow” and “move it into joint escrow.”

It might not sound like rock ‘n’ roll, but Harrison’s life probably didn’t feel like it, either. And the bitter squabbles of the Beatles affair hung over everything. Lines about suits and countersuits (“Bring your lawyer / I’ll bring mine”) directly referenced the court battle with Paul McCartney.

‘Sue Me, Sue You Blues’ had several references to Beatles legal woes

Harrison uses a light touch on “Sue Me, Sue You Blues,” as if he’d thrown his hands up over the matter by the time of its ’71 writing. With that date of composition, you can track most of the song’s references to the Beatles’ legal issues. “Now all that’s left is to / Find yourself a new band” sums it up nicely.

“Around that time we had millions of suits flying here, flying there,” McCartney told Rolling Stone in 1974. “George wrote the ‘Sue Me, Sue You Blues’ about it. I’d kicked it all off originally, having to sue the other three Beatles in the High Court. After that everybody just seemed to be suing everybody.”

It was more than a feeling. And though McCartney acknowledged how he’d fired the first shot, the other parties’ lawyers had no trouble returning fire. “But in the end we just pay those / Lawyers their bills,” Harrison sings on the track. Actually, in the end, The Beatles got their millions into their own private accounts — minus the chunk Allen Klein kept for himself.