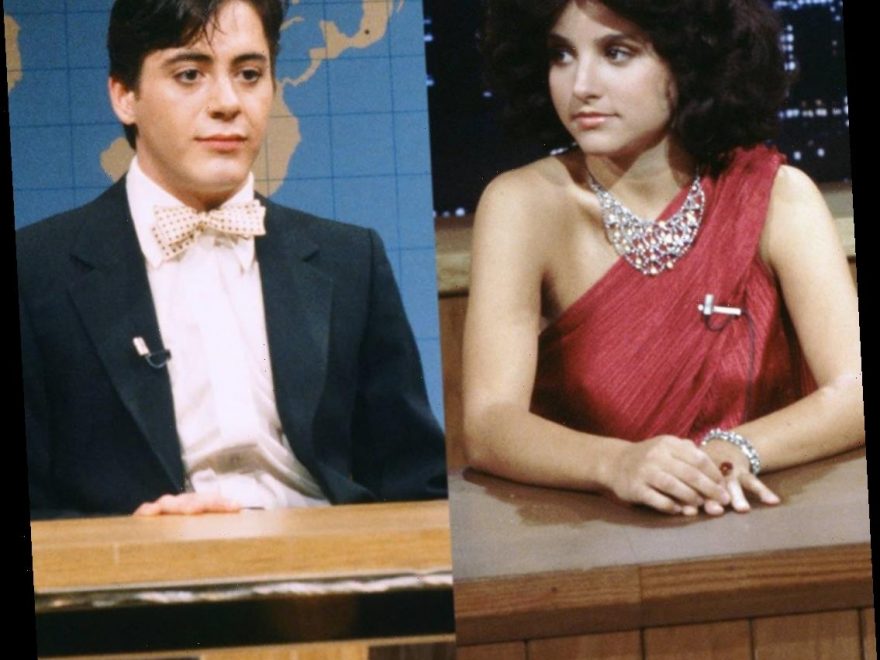 Before they were Oscar nominees and Emmy winners, they were SNL cast members.

Saturday Night Live has been home to many famous faces in its 45 years on the air.

Some of those stars stuck around for long tenures—like Kenan Thompson, now in his record 18th season, and Kate McKinnon, the longest serving female cast member ever with nine seasons—while others had a decidedly shorter time on the sketch show.

While some of those blips on the SNL radar were relegated to the footnotes of TV history—no offense to the Dan Vitale and Morwenna Banks fans out there—some went on to become much bigger than their brief time on the show might've otherwise foreshadowed.

Did you know The Connors' Laurie Metcalf made an appearance way before she rocketed to stardom with her Emmy-winning Roseanne role? Or that Julia Louis-Dreyfus was a cast member for a few seasons before hitting it big with Seinfeld? She met even creator Larry David on the show!

In honor of the 45th anniversary of SNL's series premiere on Oct. 11, 1975, take a look at the gallery below to reacquaint yourself with some of Hollywood's heavyweights who got their start on the late-night comedy staple.

Kelly Ripa on Her and Mark Consuelos' Decision to Quit Drinking

Katharine McPhee Seemingly Confirms Her Pregnancy in a Subtle Way

Laurie, known to legions of fans for her Emmy-winning work on Roseanne, was a featured player for one season finale episode in 1981, where she appeared on Weekend Update in a pre-taped segment about taking a bullet for the president. That season was the first one without Lorne Michaels and was generally regarded as a failure. After that disastrous season and then a writers' strike, the whole show was retooled and most of the cast wasn't asked back.

She was hired during Lorne's first year back at SNL in 1985, but was one of many cast members that year who wasn't asked to return after a pretty uneven season.

The actress, who recently starred in Wet Hot American Summer: Ten Years Later, joined the cast in 1994, but she only made it through half a season before quitting because she was anxious and depressed and found the environment sort of unbearable. She was mostly cast in wife or girlfriend roles, and thought most of the sketches were "juvenile and homophobic." When Janeane joined the show, she was one of only three women in a cast that included Adam Sandler, Mike Myers, Chris Farley, Tim Meadows, Kevin Nealon, Norm Macdonald, Chris Elliot and David Spade.

Where so many others tried and failed to get hired on SNL, Catherine (star of Best in Show, Home Alone and a little thing called Schitt's Creek) tried and succeeded, but never actually appeared on the show. She was hired when it was being retooled in 1981 after Lorne left, but she gave up the spot when her previous sketch show, SCTV, was revived.

The Seinfeld and Curb Your Enthusiasm creator worked at SNL as a writer from 1984 to 1985, though only one of his sketches ever aired and it got the last slot of the night. At one point, he decided to quit SNL, but he regretted that decision as soon as he got home. His neighbor, who went on to inspire the Seinfeld character Kramer, suggested that he just return to work and act as if nothing happened, which is exactly what he did. In 1991, David wrote an episode of Seinfeld called "The Revenge" in which George does the exact same thing. It didn't work for George, but it did work for David, who stayed at SNL for the rest of the season and got to know Julia Louis-Dreyfus well enough to eventually cast her as Elaine.

This was another season six hire who didn't make it past the hiatus in 1981. He did appear in a few episodes, but you'd barely recognize him since he wasn't yet using his now signature voice and was mostly playing a lot of side characters. He cited playing a corpse in a funeral sketch as one of his lowest points on the show.

Damon was hired for the 1985-1986 season, but was fired for making too many changes live on air, such as when he played what was supposed to be a straight cop as a flamboyantly gay cop. Wayans claimed that he went off script because he was frustrated that his sketches were not being considered for the show. There apparently wasn't too much bad blood though, because he returned to SNL to perform standup 10 years later.

Anthony was kind of a big deal when he was hired at SNL in 1985. He was—and still is—the youngest cast member ever at 17 years old, and had just starred in The Breakfast Club and Weird Science. Of course, that was the experimental year where Lorne was trying to revitalize the show with a younger, cooler cast, so Hall only got to stay on for one season.

Sarah was a writer and cast member for one season from 1993 to 1994 before she departed. She appeared in sketches, but nothing she wrote ever made it to air. Bob Odenkirk, who had been a writer from 1987 to 1991, once said, "I could see how it wouldn't work at SNL because she's got her own voice, she's very much Sarah Silverman all the time. She can play a character but she doesn't disappear into the character—she makes the character her." She also says she just wasn't ready for the job when she was hired.

Steve reportedly auditioned for SNL along with his wife, Nancy Carell. He didn't get in, but she made it onto the cast for the 1995-1996 season. Lorne cited Steve as talent that got away, but the Oscar nominee said he never auditioned. Instead, Steve joined the cast of the short-lived Dana Carvey Show, which introduced The Ambiguously Gay Duo cartoons. The Office alum provided the voice for one of the titular pair. The other half of the duo was voiced by…

Stephen auditioned for SNL but didn't make the cut. Instead, he worked as a freelance writer alongside Robert Smigel after briefly working at The Dana Carvey Show, where Robert created The Ambiguously Gay Duo. Stephen provided the voice of Ace, while Steve played Gary. The cartoons ran occasionally on SNL from 1996 to 2011.

She may have lasted three seasons, but it was during that time when Lorne wasn't in charge and Eddie Murphy pretty much overshadowed anything else that was happening, so people tend to forget that she was ever a cast member. Julia was 21 when she was hired in 1982, and it was apparently not the most amazing experience for her. She has said that it was often tense because she didn't really know what she was doing in the world of sketch comedy. It's all OK though, because SNL led her to Larry David and, eventually, becoming a true TV icon as Elaine on Seinfeld.

Ben was hired by SNL in 1989 after gaining attention with a short film parody of the Martin Scorsese film The Color of Money. However, he quit after four episodes when he wasn't allowed to make any more shorts for the show. He would go on to create his own eponymous sketch show alongside Judd Apatow, airing first on MTV in 1990 and then on Fox in 1992. SNL alums Janeane Garofalo and Bob Odenkirk joined the low-rated cult classic's cast as well.

Iron Man himself was a cast member on SNL for the 1985-1986 season alongside Joan Cusack and Anthony Michael Hall. He was 20 years old and only stayed on the one year, but it seems like he did OK for himself after leaving.