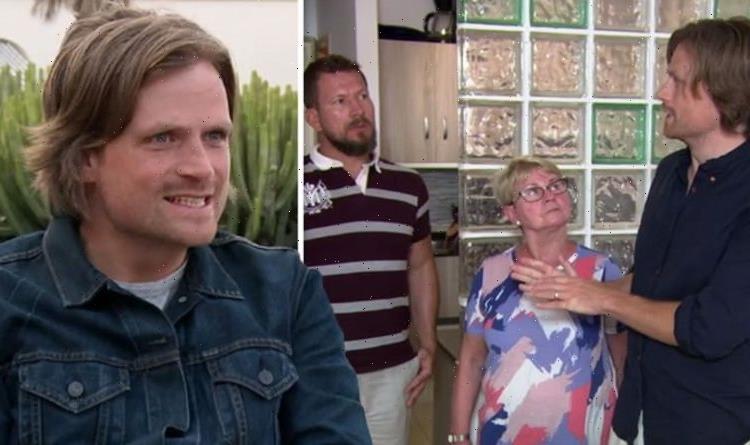 A Place in the Sun: Ben admits 'worry' for guest's low offer

Ben Hillman was tasked with finding the perfect holiday home for ex-policeman Steve in Thursday’s repeat of A Place in the Sun. The Channel 4 guest proved to be a “picky” house hunter and was surprised by what his budget could afford him in Fuerteventura. However, Ben offered the guest some stern words of advice as he admitted he feared Steve had “shot himself in the foot”.

Steve was looking for a two-bedroom holiday home where he could spend time with his daughter Madison.

He invited his step mum Sandra along for the property search and Ben soon realised how “picky” his guest was.

The ex-policeman was looking for a spacious property with outside space close to amenities.

However, Ben warned him his budget of £100,000 was extremely optimistic for the area.

Read more: A Place in the Sun guest holds back tears as warning issued ‘Go away!’

Ben’s search didn’t get off the best of starts and Steve was “hesitant” as soon as he walked into the first property.

“It’s smaller than anticipated especially if it’s just one bedroom,” he noted.

“How are you feeling?” Ben asked. “You have a finite budget and this is what you can afford.”

“My gut instinct is it’s a no, it’s not for me,” the former policeman hit back.

Steve was far more impressed with the next property but refused to reveal whether it was a contender.

The next property was a two-bedroom townhouse that came with a roof terrace complete with stunning views.

However, the location disappointed both Steve and Sandra as they felt it was too far from the beach.

He felt the spacious property with a private roof terrace and access to a communal pool.

However, yet again he wasn’t completely sold and urged Ben to find him something in his preferred area of Caleta de Fuste.

“Are you getting frustrated with him?” Ben asked Sandra. “Because I am.”

The Channel 4 expert asked if he could push Steve’s budget and the former policeman agreed he would be prepared to spend £120,000 for the perfect place.

Ben found Steve a property that appeared to tick all of his boxes but the former policeman was not impressed.

“If I’m being truthful it’s not the right environment for me,” he said. “I can’t shake this off.”

“You’ve got to level with me here, you wanted to buy in this area which is very touristy but you’re saying you don’t like this sort of complex, what did you hope to find here?” Ben asked.

“You’ve ruled it out haven’t you, as amazing as it could be you’re not interested,” the presenter added once they were all inside.

Once the search had come to an end, Steve revealed he wanted to put an offer of £92,000 in on the three-bedroom villa he’d seen.

“I’m worried you’re shooting yourself in the foot,” Ben remarked. “I don’t want you to be in the position six months from now where you’ll be thinking, ‘For an extra £5,000 I would have that perfect property.’”

However, Steve decided he would wait and find somewhere different rather than increase his offer.

A Place in the Sun airs on Channel 4 on weekdays at 3pm.