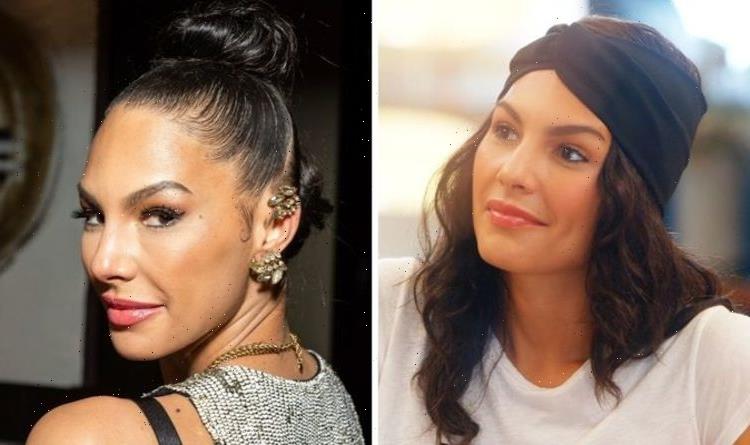 Amanza took to her Instagram stories to answer some fan questions this week, including some juicy tidbits from the latest season of Selling Sunset. The Netflix star had to turn one of her Australian fans down by confirming she is indeed in a relationship but remained tight-lipped about her new partner’s identity.

The real estate agent and interior designer all but revealed her new boyfriend in her latest social media activity.

Her beau’s identity remains unknown for now, but her followers were given a glimpse of him sitting next to Amanza in a red shirt.

Unfortunately, the mystery man’s face was blurred out by the Selling Sunset star’s caption.

One of her fan’s asked: “Are you single and if so what chance does an Aussie guy have of getting a date with you?”

To which Amanza revealed: “No dates with anyone. I’m in a relationship!”

Another follower asked the Selling Sunset regular: “Are you dating?”

And Amanza confirmed again: “Nope! I have a boyfriend!!!”

Amanza was previously married to former NFL player Ralph Brown, who played for the Arizona Cardinals from 2007 to 2009.

They married in 2010 but separated two years later, and have split custody over their two children.

However, the story didn’t stop there as Amanza was only able to win custody following Ralph’s strange disappearance in 2019.

Ralph sent his ex-wife a cryptic email before he vanished in the middle of the second season of Selling Sunset.

She recalled to Entertainment Tonight: “He sent an email, and he said, ‘My situation isn’t good right now.”

“’I can’t financially take care of the children’ and that it’s ‘not safe for them to be with me. You need to keep them until my situation changes.’”

Despite his drastic decision, Amanza maintains her ex-husband is still alive and could eventually resurface.

In court details obtained by the Sun, she said: “If and when Ralph does come back, I need to be able to ensure that he is coming back into their lives in a good place and does not intend on abandoning them again.

“I have no desire to take custody away from him, except to protect our children.”

Another follower asked how she was doing after winning custody.

“It’s been emotional but I am ok,” she replied. “My kids are literally the best kids on the planet! I couldn’t ask for easier babies!”

Thankfully, Amanza has managed to overcome the situation and has found happiness with a new partner.

In her IG Stories, she also confirmed she had been in bed with flu for four days, but is on her way to recovery.

Selling Sunset season 4 is available to stream on Netflix.