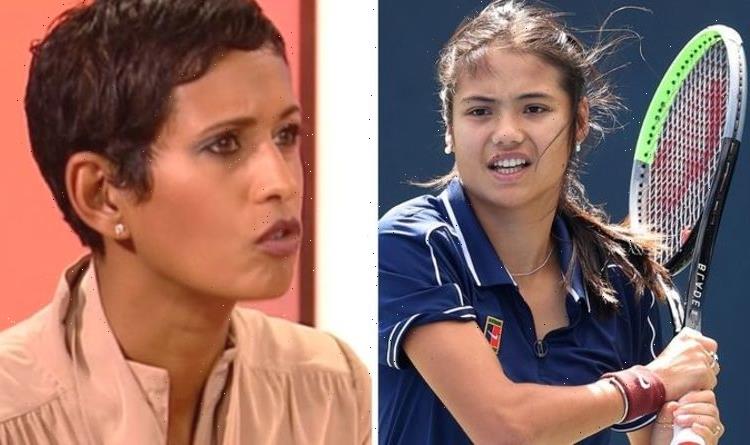 On Saturday’s BBC Breakfast, Naga Munchetty and Charlie Stayt were back on the red sofa to bring viewers the latest news updates. The duo discussed a range of topics including the horrific 9/11 incident, which marks 20 years since that fateful day. However, the majority of the show was dedicated to the tennis and Emma Raducanu, who has reached the US Open Final in New York.

The tennis professional is the first qualifier to reach a Grand Slam final and will play another teenager Leylah Fernandez later on Saturday.

Not only did Naga and Charlie speak with sports presenter Mike Bushell about the match, but they also spoke to other guests via video about the tennis player.

They also cut to a tennis court in Bristol, where presenter Fiona Lamdin spoke with a number of budding tennis players, who all sent messages of good luck to Emma.

However, many viewers felt the coverage was a bit much, and they took to social media to air their thoughts.

One penned: “I know Emma is fantastic, but enough with the hype! #BBCBreakfast.”

Another raged: “#BBCBreakfast can we give #EmmaRaducanu a rest, this is overkill now! #USOpen #EmmaRaducanu #LeylahFernandez.” (sic)

A third asked: “#BBCBreakfast why are the BBC obsessed with saying Emma went to a grammar school.”

“That’s all we’ve heard about all week,” a fourth pointed out.

A fifth viewer said: “Poor Emma hasn’t even won yet and #BBCBreakfast are already treating her as a demigod, asking kids and pretty much anyone who will go on camera pointless questions.

“One can always rely on the #BBC to go over the top and make everyone nauseous with the overexposure of frippery.”

“Who else can the BBC get to talk about Emma Radacanu?” Another tweeted. “How about the pilot of the plane that flew her to NY? #BBCBreakfast.”

A seventh commented: “Whenever I hear a tennis player being interviewed I lose the will to live.”

However, not all viewers were unhappy with the coverage as many sent their messages of support to Emma.

One penned: ” Great news that Emma Raducanu is through to the US Open final – the first time a British woman has been in a grand slam final since Virginia Wade in 1977!”