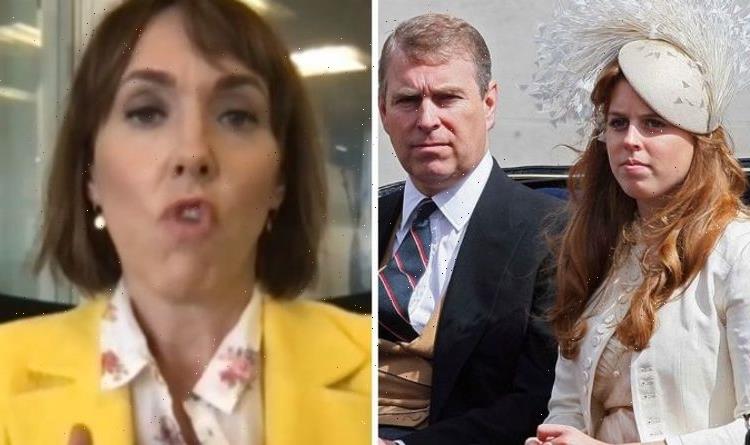 During Tuesday’s This Morning, ITV hosts Holly Willoughby and Phillip Schofield spoke with royal expert, Camilla Tominey about Princess Beatrice giving birth to a baby girl and the new documentary about Prince Philip’s life, which airs on the BBC this week. The new documentary titled Prince Philip: The Family Remembers will see those closest to him tell the story of his life and achievements. However, during the interview, Camilla spoke with the presenters about Prince Andrew, and how his daughters were left “devastated” by their father’s Newsnight interview.

Prince Andrew recorded an interview with BBC Newsnight in November 2019, in which he was grilled by Emily Maitlis on his association with Jeffrey Epstein.

During the segment on This Morning, Holly and Phillip spoke with Camilla about whether Prince Andrew will be served with legal papers regarding a sexual assault case from his accuser, Virginia Giuffre.

Holly began: “That is what is so sad about this, is that if he leaves the compound [Balmoral] if you like, to go out and meet his granddaughter,

“Then he will be served with these papers presumably.”

“The interesting thing is, is that the Roberts legal team think he has already been served,” Camilla replied.

“Paperwork was served to his security guards at the Royal Lodge in Windsor, which is his home down the south.

“His legal team said, ‘They haven’t been properly served, they need to be served by a court intermediary’.

“The High Court said they are willing to be that intermediary, so this legal battle is going on.”

“But at the end of the day, he is a father and a doting grandfather,” she added.

“I think the fallout from this ongoing saga, your heart has to go out for his two daughters, Beatrice and Eugenie,

“Who by all accounts are really lovely, really grounded down to earth girls who are trying to get on with the rest of their lives.

“But I don’t think it’s an understatement to say they have been devastated by everything that has gone on since that disastrous Newsnight interview.”

Tominey’s comments come days after the lawyer of Virginia Giuffre claimed legal papers regarding a sexual assault case involving his client were issued to the royal.

The High Court in London accepted last Wednesday a request by Giuffre’s lawyers to formally contact the Duke about the legal proceedings which were launched in the US.

Giuffre is suing Prince Andrew for allegedly sexually assaulting her when she was 17-years-old. Andrew has denied the allegations.

Elsewhere in the This Morning interview, the royal expert discussed Prince Harry making an appearance in the Prince Philip documentary.

The one-hour special was meant to mark the late Duke of Edinburgh’s 100th birthday.

However, instead of axing the programme, they decided to mark the royal’s life.

Camilla pointed out the programme is a “great watch” before playing a clip of the Duke of Sussex talking about his grandfather.

“And the craziness happening around him. He would just sit there so completely calm.

“He would just watch us run by.”