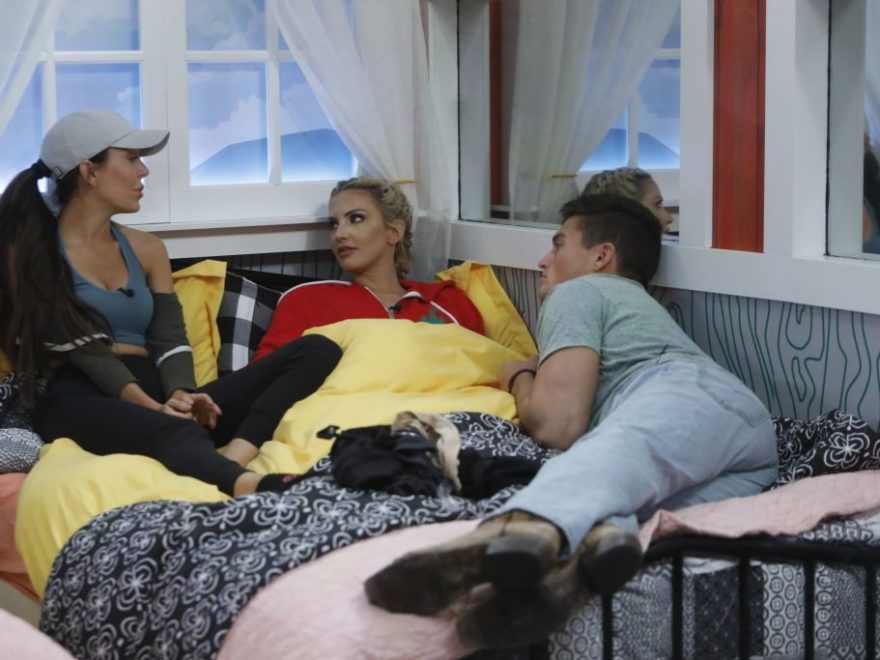 Holly initially voted Jackson for Camp Director on Day One, but their romance didn’t begin until a few weeks later. After winning back-to-back Head of Household competitions, the two could be considered one of the most powerful Big Brother showmances in the history of the reality show.

However, an incident on the Live Feeds has watchers concerned that Holly could be pregnant. What happened? Keep reading to find out.

Therefore, he felt it was better for his game if he were romantically involved with Holly, as she is already in his alliance and Kat played more of a floater game.

As the weeks went on, Holly and Jackson built a relationship and stayed under the radar for the most part. However, Jackson told his best friend in the house, Jack, that Holly and Kat knew each other in real life; not knowing how close Jack was to other alliance members, Tommy and Christie.

The fitness trainer repeated the information to them, and Tommy nominated Kat for eviction the following week when he won Head of Household. Following the HoH’s wishes, the house sent Kat to The Jury House.

Then, Jackson and Holly’s alliance crumbled, and the two alienated themselves from everyone. They regained power by winning HoH and Veto competitions back-to-back, and sent Nick and Analyse to the Jury House.

When Holly called Jackson a f*****g a*****e because she said he was ignoring her, an argument ensued that rocked their otherwise steady relationship.

Embarrassed that she called him that in front of other Houseguests and on national television, Jackson was extremely irritated with Holly. The beauty queen explained why she was upset, and the two have seemingly worked things out. However, now there may be another scandal that could shake up their relationship.

Around 5 a.m. PST, the feeds returned from the “We’ll Be Right Back” screen to show Holly outside of the HoH room. She entered, holding her stomach, and was moving around in one place as if she had to use the restroom.

Once Holly went into the bathroom, Jackson entered the room and said he went to the storage room to get her something but was called into the Diary Room. He said production asked him about Holly because she’s not feeling well.

The pageant beauty went near the toilet with Jackson kneeling beside her. She is heard saying something about her esophagus and a burning sensation she’s feeling. After Jackson got her water, Holly threw up in the toilet and then the Live Feeds cut.

They returned almost an hour later, and the pageant beauty seems to be in pain as she is holding her stomach. Ten minutes later, Holly held her head and wondered where she “could have gotten it from.”

When Holly threw up, Big Brother chat sites exploded with theories that the pageant beauty is pregnant and experiencing morning sickness. Is it true? After her fight with Jackson, she admitted she stopped taking birth control because the hormones made her lose control of her emotions, so it is a possibility.

However, her symptoms could also indicate food poisoning or acid reflux. Is Holly pregnant? Keep watching Big Brother Wednesdays at 8 p.m. EST on CBS to find out.