Brian J. Robb explored Reeves’ past in the book Keanu Reeves: An Excellent Adventure. Bill & Ted’s Excellent Adventure writers Chris Matheson and Ed Solomon talked about how the project ultimately came off the ground. The lead characters actually originated in improvisations and letters between the writers. This method ultimately created the now-iconic characters of Bill and Ted.

The initial idea behind Bill & Ted’s Excellent Adventure was to have two teenagers talking about world affairs issues and how ridiculous they were. However, it ultimately blossomed into something more, taking their improv another step further.

“Ed and I went out after the [improv] show that night and played those guys for about three hours,” Matheson said. “We fleshed them out, and many things fell into place that are still there.”

Director Steve Herek narrowly avoided ripping off ‘Back to the Future,’ but ended up ripping off ‘Doctor Who’ 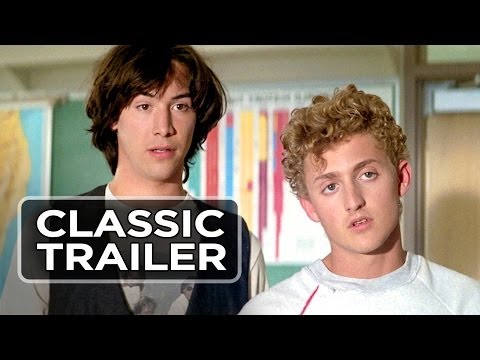 “Our initial take was wild, loose and unstructured – which gave it a crazy irreverence – but it became much more organized,” Matheson said. “The device of time travel also changed. Originally we had Rufus [Bill and Ted’s mentor from the future, played by George Carlin] driving them around through history in a ’69 chevy van, but there was a feeling that it was too much like Back to the Future.”

Matheson continued: “When [director] Steve Herek came on board, he suggested the phone booth and it works pretty well.”

However, Robb mentioned that the iconic imagery of the phone booth is actually borrowed from another legendary property.

Robb wrote, “Herek and the writers seemed unaware that British TV had featured a time-travelling character who’d used a phone booth as his mode of transport since 1963 in the long-running TV series Doctor Who.”