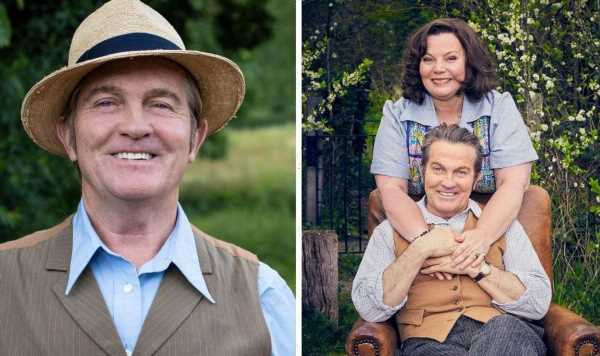 Bradley Walsh talks about wearing his grandad's hat on The Larkins

This October sees the return of the ITV 1950s drama The Larkins. The second series of the show will see some new additions to the cast including the troublesome Jerebohm family. Despite the newcomers causing a stir in the village, Bradley Walsh had nothing but kind words to say about his co-stars when speaking to Express.co.uk.

Series two of the ITV drama The Larkins is returning back to TV screens this month as the Darling Buds of May remake follows the journey of a Kent family in the 1950s.

In the series finale last year, viewers watched as the Larkins welcomed a new addition to their clan after Ma and Pop decided to adopt a little boy called Oscar.

Fans also saw their eldest daughter Mariette, who will now be played by Joelle Rae, head off to Paris on a romantic adventure with Charlie (Tok Stephen).

Speaking to Express.co.uk about the cast on the show, Bradley said: “We’ve been so lucky with our ensemble cast. Not just the kids, the twins and everyone.

“They’re going to grow up to be fantastic actors, but we are inundated with a ‘who’s who’ of cast members and visiting cast members as well.

“We’ve been so lucky in series one and in series two, you’ve got Edith Pilchester and the Vicor, and we’ve got young Maxim coming in.”

Reeling off numerous actors who make an appearance in the second series, Bradley commented that the list was endless.

He added: “There are young stars in the making there like Natalie Mitson who plays Pauline, it’s just a different class.

“We are so lucky with our cast, it’s amazing, it really is.”

One of those actors joining the cast Bradley highly praised is Joelle Rae who will play his eldest child, there is also Morgana Robinson as the femme fatal character, Pinkie Jerebohm.

An overview for series two teases she will cause mayhem for the Larkins with a war between her, her husband played by Julian Rhind and Ma and Pop on the horizon.

It all unfolds after Pop sells Pinkie and Mr Jerebohm Bluff Court at an extremely high price.

Although when they realise the mansion is crumbling, they regret paying such an extortionate fee and aren’t offered a refund from the family.

Furious, they vow revenge on the Larkins and do everything they can to get them back, their first mission is to take up shooting which gets increasingly loud.

Not long after that, viewers will see the new family get the help of Alec Norman to land Pop in a trap.

A synopsis for the first episode reads: “Pop Larkin hustles himself an offer he can’t refuse from Pinkie and Mr Jerebohm for the huge crumbling mansion next door. It’s a lucrative deal and there’s enough profit to start building a swimming pool.

“Ma and Pop struggle to warm to their new neighbours after a hilariously dire dinner party at the big house. And despite the Larkins’ typically upbeat efforts, it goes downhill from there, as the Jerebohms reach for their guns, is humiliated by Pop, and declare war.

“Primrose is about to leave school and is set on a career as a journalist. She’s also falling in love with the Rev Candy, newly arrived and locking horns with the tricky old Vicar.

“Primrose fearlessly asks the heavenly Reverend out and is shocked when he turns her down, but she’s not giving up.”