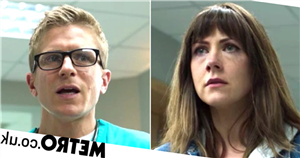 A new consultant arrives in Casualty to kick of series 36. Stevie Nash (Elinor Lawless) is set to make a huge impact, as she has history with two of the existing characters.

To Faith, a friend is someone who’ll be there when you need them. As she’s struggled with Lev’s infidelity, finding out he’s gay and now as she comes to terms with his shocking and sudden death, Stevie was nowhere to be seen, but now she wants to pick up where they left off.

Stevie has no filter and says exactly what she thinks, quickly forcing Faith to come clean about her own recent past and her relationship with Dylan (William Beck). How will her chaotic presence affect Faith as she copes with her grief?

And is any man safe with Stevie around? Judging by her reaction when Matthew (Osi Okerafor) and Iain (Michael Stevenson) are around, possibly not – though maybe Charlie (Derek Thompson) is safe.

Someone who may not be safe, but for different reasons, is Ethan. George Rainsford has spoken about a ‘devastating connection’ between Stevie and Ethan.

He says the episode is ‘an origins story for some powerful storylines going into the new series.’

The episode explores some events that happened five years earlier, triggered by a terrible accident in a storyline that also brings in nurse Jade Lovall (Gabriella Leon). But how is an accident from five years ago still affecting things today?

Why does Stevie’s expression completely change the minute she meets Ethan? We’re told she has a ‘nefarious agenda’ – and it looks like Ethan is in the firing line.

This may get even more tricky as Stevie is already angling for the Clinical Lead job.

As Ethan’s boss, she could be a very powerful enemy indeed.