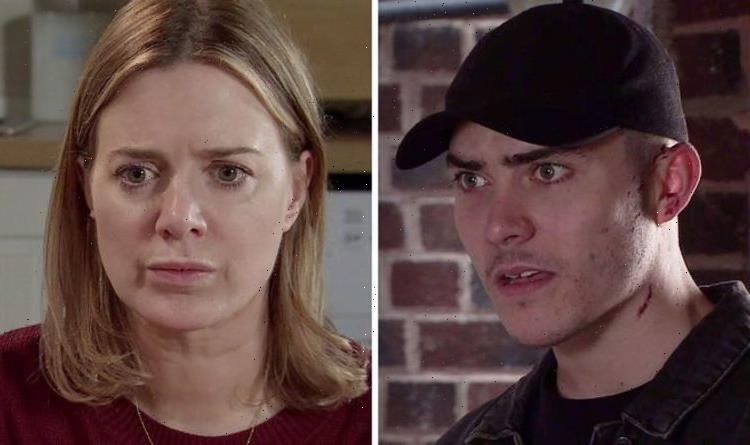 Coronation Street: Corey is found not guilty of Seb's murder

Corey Brent (played by Maximus Evans) is facing prison time now that his bloodstained clothes have been handed to the police. He’s been hiding out in a rented house with his dad Stefan Brent (Paul Opacic) how has told him he has a plan for how they can escape. Corey is aiming to get out of the country and start a new life elsewhere, however, could his time getting away with his crimes finally be over?

They are suddenly interrupted by Nina Lucas (Mollie Gallagher), who reveals she has had a call from DS Swain (Vicky Myers) and that they’re reopening the case and going to arrest Corey.

With Corey and Stefan hiding out in the house, Stefan reveals he has a plan and heads out to call Eli Higginson’s (Liam Scholes) dad Christian Higginson (Ronan Holdsworth).

Elsewhere, Abi persuades Gary Windass (Mikey North) to help her track down Corey and Stefan before the police get to him.

Thinking of how Stefan thinks, Abi also suggests they try and track down Eli’s dad and ask him for help.

Gary heads off to Stefan’s office searching for Christian, but will he make it in time and get to him before Stefan does?

Meanwhile, Stefan orders Corey to be prepared and pack his things as he tells him Christian will pick him up in a van with some cash for his escape.

Soon, Christina pulls up at the house in his van with Stefan and Corey climbing into the back.

As the pair get on their way to leave the Cobble’s behind them for good, Stefan tells Corey his plan is to start a whole new life with a foreign club.

However, as the pair think they have found freedom, the can suddenly comes to a stop and leaves Corey and Stefan in the lurch.

Is time finally up for Corey and Stefan with the police finally giving justice for Seb Franklin’s (Harry Visinoni)?

Or has Abi reached them before the police and finally ready to get her revenge?

Next week also see’s Abi confess to Kevin how she stole his money and bought the firearm with the intention of killing Corey.

In Super Soap Week, the residents in the village were left shaken as a sinkhole opened up in the back garden of Gail Platt’s (Helen Worth) home.

With the Halloween festivities underway, Abi finds Corey in the haunted house and stands in front of him at gunpoint.

Unaware of the sinkhole beneath them, the pair fell down to the sewers below and were trapped with one another.

The pair ended up going back and forth with one another, with Abi desperately pleading with Corey to get him to confess he killed her son.

Sally Carman spoke to the Metro.co.uk about their relationship and said: “She knows that Kev and Jack love each other and have a connection and always be okay.

“Whereas Seb is dead, and this is the last thing she can do as a mother to prove she loves him and get justice.”

Abi is on a mission to exact her own form of justice, so will she finally confront Corey and end things for good?